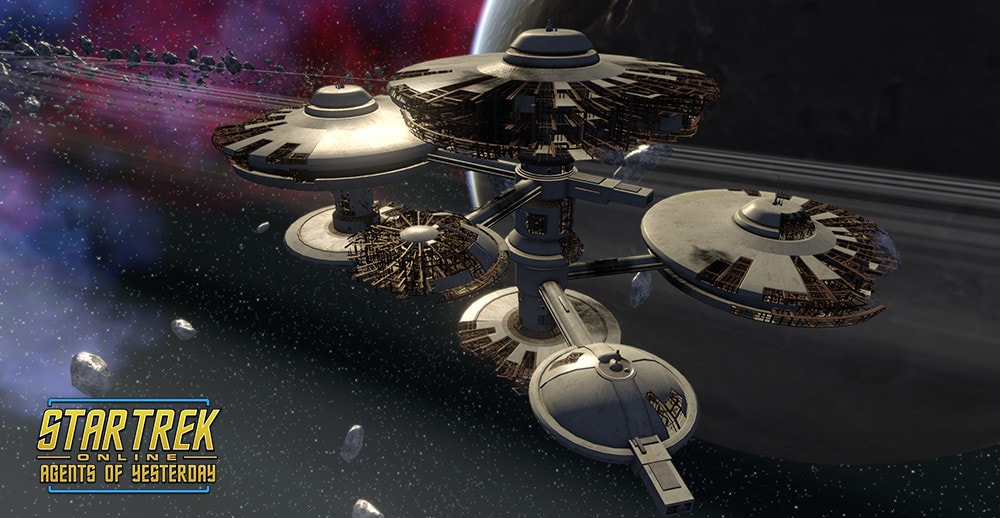 “Commander, are you sure about this?” Chief Engineer Nichols hated butting heads with Acting Station Commander O’Ryan, given their unconventional situation. “The Klingons too? We won’t have enough pods for everyone if we let them in.”

O’Ryan sighed and shook his head. “Yes, Chief, even the Klingons. Just because they are in our brig doesn’t mean we leave them to die 700 years in the past. We are Starfleet and we have to rise above our petty squabbles. Who knows? Maybe one day we’ll be at peace with the Klingons, and I know how I want us to be remembered.” The Acting Commander walked to the window of the office and looked out at the stars. “If there aren’t enough pods, we’ll draw lots to keep things fair. Everyone gets a lot, even me.” He paused for emphasis. “The Klingons, too.”

O’Ryan cut her off before she could start her counter-argument. “No buts. Look at this situation from a different point of view. We’re stuck in the past, in a star system that hasn’t been discovered by the Federation or the Klingon Empire in our time. The planet below is populated with a pre-warp civilization that the Federation has never met, so there is no proof they ever will achieve warp technology without us shattering the Prime Directive. We cannot turn on a distress beacon because we have absolutely no idea who would be the first to discover us – we could be found by something far worse than the Klingons. And if we don’t put the Klingons in stasis, then what? We execute them?” He raised his hand to head off his Engineer’s answer. “You know that’s not what we do. We send them down to the planet? Another Prime Directive violation waiting to happen. We leave them on the station? We can’t just leave them in the Brig to starve. If we don’t put them in stasis, do you trust them to watch over us?”

“No, sir.” Nichols was defeated. She knew the Commander was right on all those regards. “I understand. I’ll tell the crew.”

Nichols sat down at her console, exhausted. Putting everyone in stasis one by one had taken all week, but it was done at last. All the pods seemed stable. The Klingons were surprisingly civil about the plan, given the situation – only one refused. He put up quite the fight before Hubble sedated him – but not before he broke the nose of poor Sheldon. Nichols and the others came to a decision about their future after that.  All that remained was a final log entry… something to make it all official, for history’s sake if nothing else.  Someone would find this place, sooner or later, and she wanted to set the record straight.  Calmly, she pressed the recording button.

“Chief Engineer's Log, July 26th, 1571.  Most of us went into stasis this morning. There weren't enough pods for everyone…”

At the conclusion of the Episode “Painful Omens,” Starbase K-13 was lost to a temporal anomaly. During our update later this year, players will be able to discover the fate of K-13 and find what technologies are locked away inside. Starbase K-13 will become available as a new TOS-themed Fleet Holding, available to all Fleets in Star Trek Online.

This space station, discovered in previously unknown space, will need to be restored to its former glory. Doing so will allow the development of interesting retrofitted technology and exotic xenobiological advances.

Though the focus of the facility will be strange technologies, both new and old, a contingent of stasis pods (and their occupants) will offer many new Bridge Officer and Duty Officer candidates.

Advancing this new Fleet Holding through to its completion will also grant many incredible new options for equipping your ship and crew, as well as improving some of the core options available to your Captain and your fleet mates.

Fleet Station K-13 will also feature many unlockable projects to improve both its interior and exterior visual appearance, as well as many standard conveniences that all starship captains need access to from time to time. Fleets can also unlock inter-fleet shuttle capabilities that will allow for quick and easy access to K-13’s location.

Additional details on all of the equipment and unlocks associated with this Holding will be published in a future blog, closer to the release date.