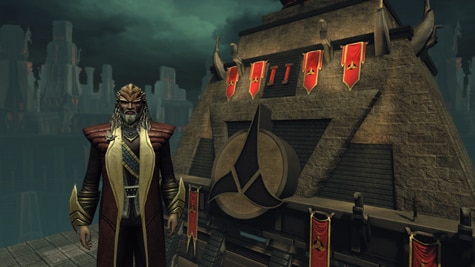 Complete with a brand-new tutorial and brand-new missions, Klingons now have full leveling progression, starting the game at level 1 and playing episodes, missions and events all the way to level 50.

It was always promised that if Star Trek Online was ever going to add a third faction, we would make sure that Klingons would get expanded content first (or at the same time). With Legacy of Romulus adding Romulans as a playable faction, it was a matter of honor that the Klingons get their own content from level 1 to 50.

The previous starting point for Klingon characters assumed you had some familiarity with the game and started you off at a higher level. You were assumed to be a newly minted Captain in the Klingon Defense Force, and you would be tested in the Bat’leth arena to determine your worthiness to command a vessel flying the Klingon flag. This was something that we wanted to keep for the Klingons; it is a very important rite of passage. However, since you would now be starting the game at level 1, we had an opportunity to establish exactly how you came into possession of the B’rel marauder you begin the game with.

We looked back to the Klingon lore, and remembered in Star Trek: The Next Generation episode “A Matter of Honor,” Riker participates in an Officer Exchange program to become First Officer on a Klingon ship. When Worf learns of this, he instructs Riker that one of the duties of the First Officer is to kill his Captain if he finds him unfit for command. This spoke true to what would make the story feel very Klingon. We also studied all the episodes of Star Trek involving Klingon crews and how they interacted and behaved on their ships to get a better sense of what we would be presenting to the player. In Deep Space Nine’s episode “Soldiers of the Empire,” Worf becomes First Officer to General Martok, and shows some of the ceremony involved in that – this became something we definitely wanted to include in-game! Your ship’s Record of Battle is mentioned several times in the tutorial, giving you a good sense that you are inheriting a ship with a legacy while at the same time writing your own chapter. 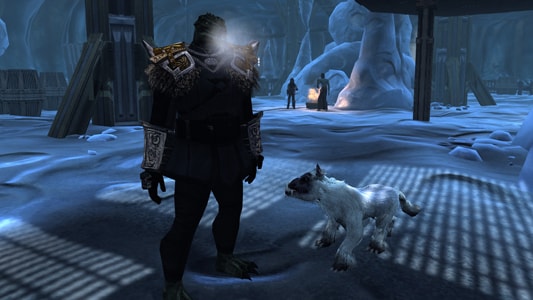 The team determined that the cause of the captain’s cowardice would be a Federation prisoner brought on board your ship. At first, the prisoner was to be a simple easter egg for Federation players who played through the Klingon tutorial, so we used Franklin Drake, though he is never specifically named as such. He would be a high value, yet anonymous, Federation Prisoner, and the catalyst for you becoming captain of the ship. This prompted our revamp of “Tour of Qo’noS,” and there was a sudden realization that the Federation Prisoner made for a great foil. His escape, and your subsequent pursuit, could bring you to the major points of interest in First City that new players need to learn the locations of: the Exchange, the Tailor, the Shipyard, etc. New players now learn the important locations in First City without realizing it, simply by playing through their pursuit of the Prisoner in “The Hunt Is On.”

We then looked at adding even more original content to the Klingon story and took the pursuit of Franklin Drake to an entirely new in-game location: Rura Penthe. This prison planet, seen in Star Trek VI: The Undiscovered Country, was never before seen in Star Trek Online, but now features a fantastic mission where you meet up with K’mtar, who sharp-eyed individuals will recognize as Alexander Rozhenko, Worf’s son. In the Next Generation episode “Firstborn,” K’mtar travels back in time in an attempt to convince the younger version of himself to protect his father in the future. This entire episode was worked into the Klingon story line, and K’mtar becomes a major ally to the player in several missions, eventually reuniting with his father Worf in the episode “Bringing Down the House.” At the end of “Manhunt,” your Klingon character also earns a Jackal Mastiff combat pet. This pet can be sent after your enemies throughout your Klingon career. 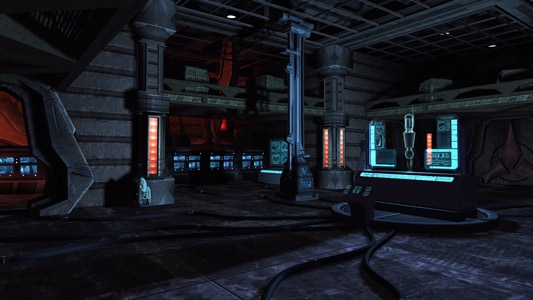 Some of the older Klingon episodes, like “Bringing Down the House” and “The House Always Wins” also saw some great improvement. The new Contact Dialog system was added to these missions, the maps had an art-pass, and the mission flow was tightened up. You now have K’mtar with you on Forcas III and Gorath, acting as a guide as he fights alongside you. A giant space battle was added to the end of “The House Always Wins” as well, with Worf leading the House of Martok’s space fleet into battle personally in command of his ship, the I.K.S. Taj.

We also updated several Cardassian and Borg themed episodes for inclusion in the Klingon’s storyline. New dialog options were added to make them feel more in-line with the Empire’s goals, and an effort was made to make many parts of the game friendlier to cloaked ships! Yes, that’s right; we can now take steps to ensure that your First Officer doesn’t pull your ship out of cloak just to tell you that nothing can be found on the scanners. It’s a slow and involved process to make all the Klingon missions “cloak friendly,” so give us some time. It’s one aspect of the game we will continue to improve upon in the future.

We are also excited to announce that we’re adding two new Klingon ships to the C-Store with the launch of Legacy of Romulus! These Birds-of-Prey are small, fast and fill a variety of roles for the Empire. They can be used as scouts, raiders or patrol ships. While they’re vulnerable when cloaked, their speed and maneuverability make them hard to hit. Also, the Bridge Officer spaces on a Bird-of-Prey are mostly universal, which makes them more versatile. 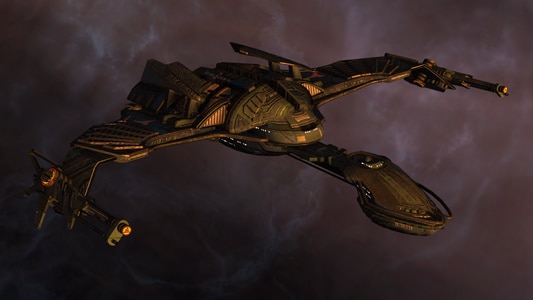 The B'Rotlh Bird-of-Prey is equipped with a standard cloaking device and comes with a universal Enhanced Induction Coils console that can be transferred to other Klingon ships (or Romulan ships if a Romulan captain is allied with the Klingon Defense Force and claims this ship from the C-Store) – it can be equipped in any console slot. This Console Mod allows you to provide a short duration increase to your weapons and engine power levels. In addition, it repairs disabled weapons and engine subsystems. 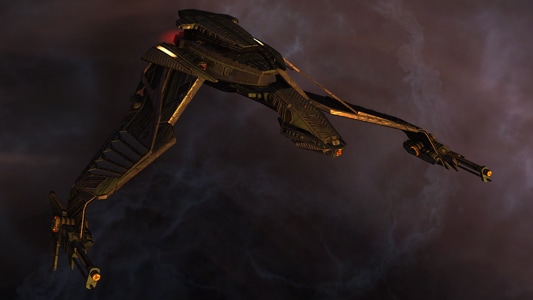 The Qaw'Dun Bird-of-Prey is equipped with a battle cloaking device and comes with a universal Shield Destabilizer console that can be transferred to other Klingon ships (or Romulan ships if a Romulan captain is allied with the Klingon Defense Force and claims this ship from the C-Store) – it can be equipped in any console slot. This Console Mod generates a large Tachyon field around your ship which will drain shields and shield power from nearby hostile ships. You cannot activate Shield Destabilizer while cloaked.

All in all, you can see that the Klingon side of the game has received some much needed love and attention, and players who have participated in our Closed and Open Tribble Betas are raving about what they have played so far. We can't wait for you to check it out when Legacy of Romulus goes live next Tuesday! Qapla’!