Developer Blog: A Stable of Insignias

As mentioned previously, Mounts are getting a big overhaul this expansion. In this blog we’ll be going over the Stable, one of the major new components of these changes, as well as Insignias and how they tie into the system. The Stable is a sub-tab of the new Mount tab, visible from the Character screen. From this screen, you’ll be able to manage all of the Mounts in your Stable, as well as any Insignias those Mounts have equipped. You’ll also be able to see which, if any, Insignia Bonus Powers you have activated with your Insignias.

But what ARE those Insignias? How do I get them? And what’s with these Insignia Bonus powers?

Insignias are a new item type that will be dropping soon from a critter near you! There are 5 different Insignia types, or shapes:

Any given Insignia slot can only be filled by an Insignia that matches that slot’s shape. So, Enlightened slots need Enlightened Insignias, and so forth. Each of the Insignia shapes come in a variety of forms, such as Courage, Aggression, Dominance, Vigor – and others. Each Insignia shape will have 6 different forms available at launch. Here are some examples of what those do: 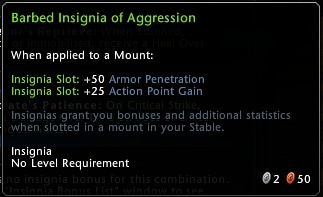 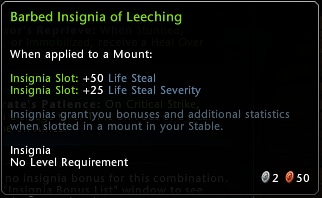 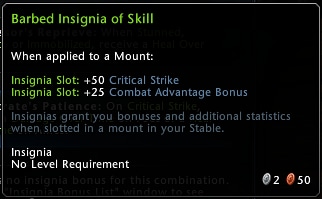 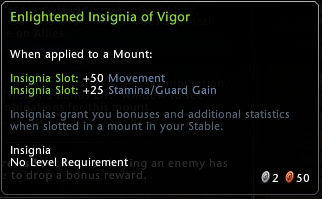 This just means any Insignia can go in this slot. That’s important, because that adds a lot of flexibility when picking your Insignia Bonus powers.

And Now for the Bonus Round!

Those symbols on the left are the Insignia shapes you need to have slotted on your Mount to activate this Bonus power. In this case, you need 2 Crescent Insignias and a Regal Insignia. There are two more important pieces of info.  First, Insignia Bonus powers only activate if all slots are a filled on a given Mount. This means you can’t activate a two-slot Bonus power in a Mount with 3 slots. Second, the Insignias don’t need to be in a specific order to work. So if you wanted Vampire’s Craving, your Regal Insignia could be in the first, second, or third slot and still work.

When this expansion launches, there will be 14 three-slot Bonus powers available, and 10 two-slot Bonus powers, so get ready to go find which ones work best for you and power up! We’ll talk to you again soon when we discuss what all of these changes mean for your existing Mounts!