As the cold winter winds sweep across the Sword Coast, a dark presence stirs…

For some time now, the Cult of the Dragon has labored tirelessly to bring about the reign of Tiamat, the Queen of Dragons. Fortunately, the heroes of Neverwinter have fought valiantly to keep this desire simply that – a madman’s dream that, with time, would melt away like a snowflake on a wyrmling’s tongue. But alas, despite the immense setbacks posed to them by the denizens of Neverwinter, the Cult of the Dragon has succeeded in achieving their twisted goal.

Tiamat has come to Toril, but there is still time…

The factions of the Sword Coast and even some repentant members of the Cult of the Dragon have rallied behind the powerful wizard Elminster Aumar in an effort to defeat the Draconic goddess and send her back to the Nine Hells! Calling upon the powers of Linu La’neral, a cleric of Sehanine Moonbow, and her colleagues, adventurers will be able to weaken Tiamat to the point where she is vulnerable to their spells and steel. In addition to this divine assault, Eliminster and his followers have conceived of another way to aid those battling the Queen of Dragons. 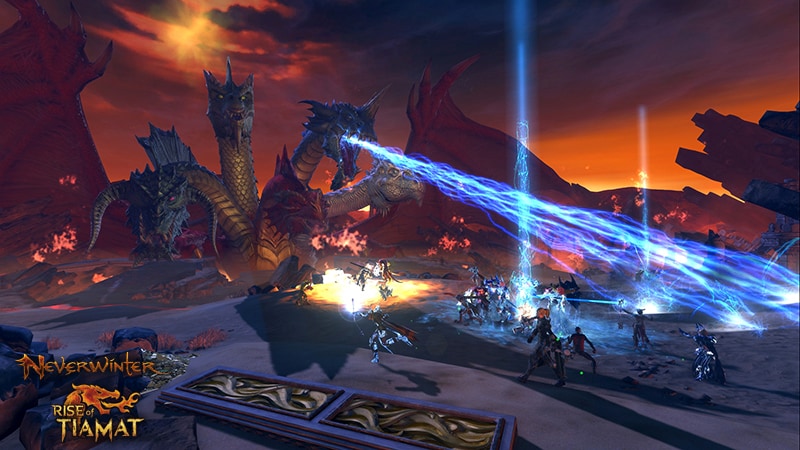 To a dragon, treasure is power. Throughout the Tyranny of Dragons campaign, adventurers have collected Dragon Hoard Coins and Dragon Hoard Coffers. You may also have noticed Dragon Empire Treasures being sold in the Wondrous Bazaar. While they have certainly had their uses, their greater purpose is now realized. By collecting Dragon Hoard Coins, Dragon Hoard Coffers and Dragon Empire Treasures, players will be able to contribute to the effort to reclaim Tiamat’s hoard. In doing this, they will be able to collectively empower the brave souls facing Tiamat. What’s more is that as the reclaimed treasure hoard grows, so will the boons bestowed upon those fighting the Dragon Queen.

To contribute to the Tiamat Hoard Reclamation, players will need to be able to access the Well of Dragons and possess any number of Dragon Hoard Coins, Dragon Hoard Coffers, or Dragon Empire Treasures. When players interact with the Reclaimed Hoard cart, they will be given the repeatable quest “Rewards for the Hoard”. This will allow them to use the Dragon Hoard treasures they have collected to contribute to the fight against Tiamat. Each treasure grants you a different number of reclamation points and they can be found throughout the Tyranny of Dragons campaign. 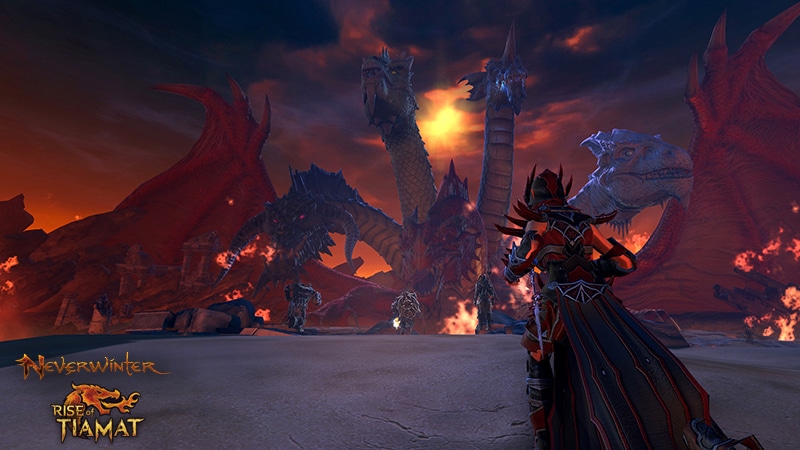 Those who complete the repeatable quest “Rewards for the Hoard” by contributing a total of 1500 points will have their beneficence rewarded with an item, Linu’s Favor, that will allow them to obtain powerful equipment such as artifact cloaks and Draconic Templar armor pieces!

The Tiamat Hoard Reclamation Rewards are divided into four tiers. As the tiers increase, so do the potency of the rewards. These rewards are server-wide and will serve you and your allies well during the battle with Tiamat.​

Tier 1 – Hoard Reclaimer:
All players in the Temple of Tiamat will receive a buff to their Hit Points and Power.

Tier 2 – Hoard Defender:
All players in the Temple of Tiamat will receive a buff to their Recovery, Defense, Deflection, and Regeneration stats.
In addition, the Draconic Templar Head and Draconic Templar Body items now have a chance to drop.

Tier 3 – Hoard Avenger:
All players in the Temple of Tiamat will receive a buff to their Critical Strike, Defense, Deflection, and Regeneration.
In addition, off-hand artifact equipment as well as the book required for the last to boons in the Tyranny of Dragons campaign now have a chance to drop.

Tier 4 – Hoard Champion:
All players in the Temple of Tiamat will receive a significant buff to their Hit Points and Power.
In addition, Tiamat’s Orb of Majesty, an artifact, now has a chance to drop. 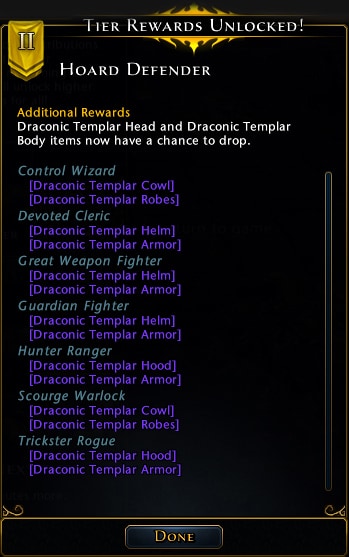 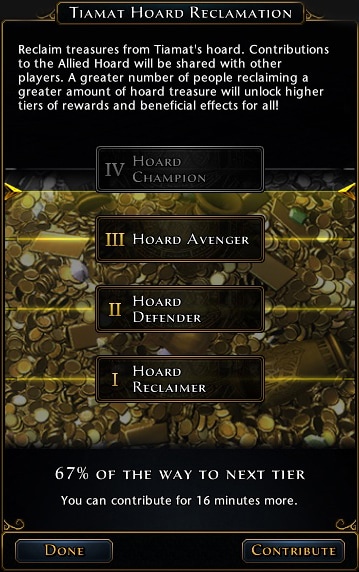 The Cult thinks they have won, but it’s not too late to act. Tiamat has risen…

Will you rise to meet her?