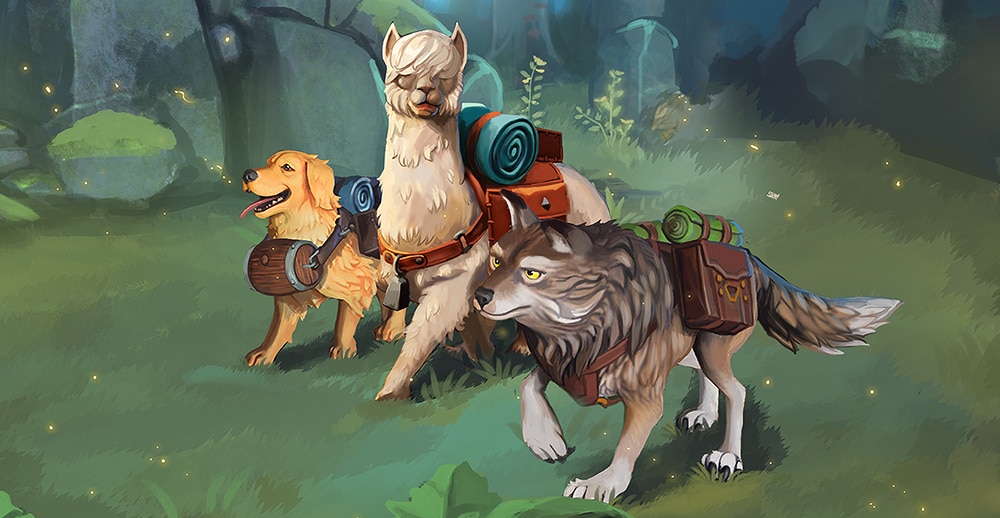 Update 7 is the biggest set of changes we’ve made since our Alpha went full-time. With pet collecting, pet skills and the new Relic system, we’ve rounded out major parts of the character strategic systems. With the Goblin Frontier’s quest revamp, we’ve aligned that frontier around a story. The new character create and select experience is filled with flavor, quality and lore. Some new monsters have crept into the world, and the variety is feeling better. On top of all this, we’ve got a ton of small changes; including our first versions of friends, our test store, and skill point resets. It’s a big step forward from Update 6.

We are excited to share Update 7: Beast Buddies with you, and we look forward to hearing your feedback. We will keep listening and keep improving this game together.

As outlined in our previous blog post, your animal allies have received a significant upgrade to their adventuring capability!

Two new pets to collect, the Wolf and Dragonling

Additional pets can now be rescued from cages

Blood Drinker, Bane, Flaming Destroyer, and the entire Relic system have all undergone a metamorphosis! Additional details are available in our previous blog post.

New arrivals to the frontier are now sent to uncover what has caused the recent frenzy of goblin activity in the area. Dark forces conspire against the safety of the Imperial Outpost, beware!

Quests in the Goblin Frontier have been redone to supply more narrative, lore, and motivation for players embarking on their adventures. New dialogue and rewards can be expected along the way.

Characters with partial progress in the old quest line will be transitioned to a similar point in the new version. In some cases, you will need to visit quest givers to pick up the next mission.

A skill point reset is scheduled to occur with the release of Update 7: Beast Buddies on July 16. This means you’ll have the opportunity to try a new build or tweak your current favorite! Please note that this is not the full-fledged respec system outlined on our roadmap.

We’ll be doing skill point resets  on a weekly basis for at least a few Update cycles in order to make content testing and feedback easier for alpha testers. These resets are optional to claim per-character so you won’t be forced to re-spec if you don’t want to. Full resets will be extremely rare in the release version of the game, we are just using them as a testing aide at this time. We’ll let the alpha players know ahead of time when the “last weekly respec” is coming.

Players can purchase Lux, our paid currency, through the Arc Charge Up feature. Alpha players will retain any Lux and Shop items they purchase going forward (no wipe). Please be aware that these are real money transactions and there is no plan for a refund or reset at a later date. The test shop helps us ensure functionality is stable before we begin offering a wider variety and volume of items for purchase.

You’ve got to make a good first impression. So we’ve given the character creation experience an impressive facelift. Roll a new character to see what all the hullabaloo is about!

Friends list, it’s a thing! Currently the list makes use of the Arc Games friends list. You can access your friends list on the party menu using the [P] key, and use the menu to enter chat or send party invites easily.

This feature is incomplete as there are not in-game actions for sending and accepting friend requests. Those are coming very soon! In the meantime, use the Arc client to add friends you’d like to play with in-game.

Malevolent forces have burst onto the frontier in the form of massive Netherim Brutes and clockwork Automatons. Be on the lookout!