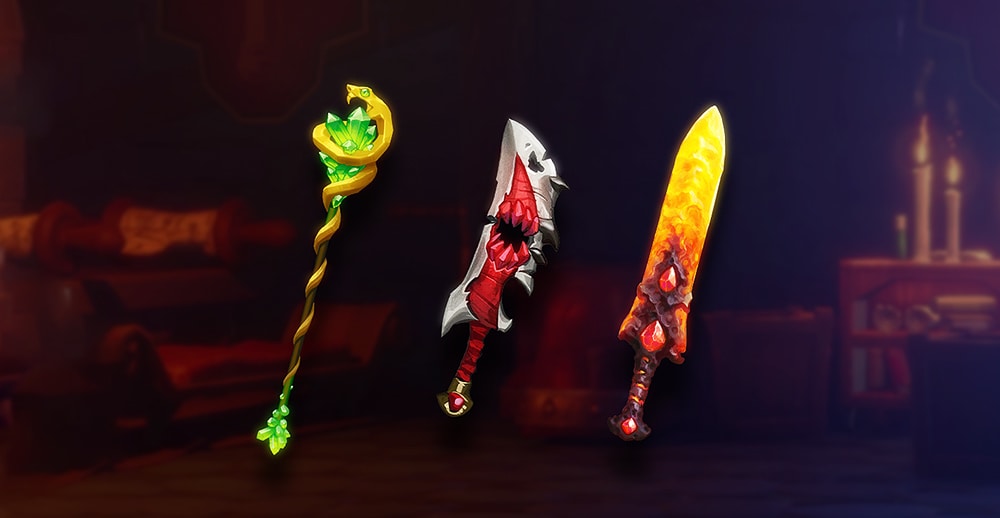 Update 7: Beast Buddies is chock-full of new content and features! The two most notable are expanded pet features and a truly rigorous overhaul of the Relic system. Similar to our tuning of skill progression, we turned to our community for early input on the Relic revamp.

Feedback from our alpha testers and our own internal experience during Updates 1 & 2 showed us that Relics were not hitting the mark. We want Relics to be an impactful and core element of gameplay and character building. So we pulled out the majority of Relics and left Flaming Destroyer, Bane, and Blood Drinker in place while we went back to the drawing board starting with Update 3.

We outlined a few guiding principles to help us during the redesign:

After our initial pitch to the community on the forum (and lots of Discord conversation), our testers carried the discussion and shaped many of the details presented below. One big change that they called for was removing all traces of frontier-specific elements. This ran counter to some of our horizontal progression and other design elements, but was ultimately the right call. Thanks for sticking to your guns and showing us the way!

Relics are crafted items that offer a massive but momentary burst in power when they are activated. Activation does not replace the stats on your current main-hand and off-hand selection, but instead gives you a large damage percent buff and other bonuses. In addition, Relics level up and earn skill points to be spent on abilities that increase the overall effectiveness of your Relic. 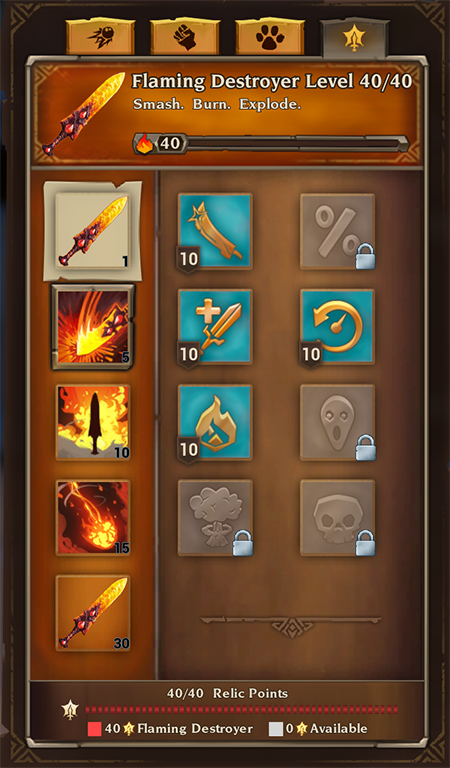 As the name implies, Flaming Destroyer is a Relic that dooms foes to a fiery end.

You can earn up to 40 Relic skill points to be spent on any of 8 skills, and each skill can be upgraded with up to 10 points. In the picture above, the column on the left shows that you’ll unlock a new feature of your Relic at level one, five, ten, fifteen, and thirty.

For the first three Relics that are included in Update 7, your level one skill triggers when you activate the Relic ([W] by default). Each Relic has a different activation ability, which provides an interesting effect along with a significant buff.

Activate Flaming Destroyer: Immediately slam enemies in front of you with a flaming sword for 125% damage. Gain +50% chance to burn enemies for 50% damage over 4s. You and allies gain +15% increased damage for the duration of your Relic activation.

Each skill along a Relic’s path has two complementary upgrades that you can invest in to provide bonuses to that ability as your Relic levels up and gains skill points. All of your Relic’s skills (both active and passive) are in effect regardless of whether your Relic is on cooldown, ready to be used, or in use.

Your level 10 skill, Magma Burst, is a passive that makes it so when you hit a burning enemy there is a chance they will explode and cause damage to the target and nearby enemies. You can invest your points in Magma Burst to add an effect that leaves a burning hazard when an enemy explodes, or add an effect that sometimes causes exploded enemies to be feared.

Your level 15 skill, Firestorm, is also a passive that has a chance to drop a fireball on your enemy’s head. Your points invested in this skill will increase the chance to call down a firestorm, or increase the damage the firestorm does when it procs.

Your final skill, Enhanced Activation, is an awesome improvement to the activation ability gained at level one. It still does everything it did before, but now it also rains meteors from the sky when you activate your Relic weapon.

With 40 points to spend there are lots of ways to allocate your power and lean into different strategies. Will you go for having more burst potential during activation, make your active skill more spammable, or go all in on procs while chasing gear that gives you an even higher chance to proc? The choice is yours, and we’ll keep adding possibilities with each new Relic.

As is the case with many of the features you see us adding to the game during the alpha, Relics are a work in progress, every aspect of which will be improved after it has a chance to be put through the wringer with our alpha testers. Your feedback is critical in tuning these systems and growing Torchlight Frontiers.

Stay tuned for news regarding the date and time of the Update 7: Beast Buddies preview stream happening next week!