Valindra’s foul magic has permeated the Sword Coast and corrupted countless dragons by awakening them to their planar echoes. To address the threat, Lord Neverember has enlisted the aid of notorious dragon hunter Smerdiuk Dragonbane. Smerdiuk and his crew have arrived in Protector’s Enclave to set up a new base of operations in their hunt. They welcome any adventurer who proves they can face off against the might of the dragons.

Smerdiuk Dragonbane is a renowned dragon hunter famous for his books on dragon hunting. He brings with him a crew of expert hunters who fulfill various roles in his dragon hunter’s camp set up past the Deekin Street gate in Protector’s Enclave. Gurness Stormforge is Smerdiuk’s trusty smith, a master of forging the magical scales of dragons into unrivaled weapons and armor. Aerlyna Everfell is the true hunter of the group, tracking dragons throughout the Sword Coast. Zaraloth investigates the mysteries of the Weave and currently researches the effects of Valindra’s mythal on dragons across the Sword Coast. And lastly Smerdiuk’s lifelong friend Dhomir the Pious serves as the group’s healer and aids in matters of curses and cleansing. 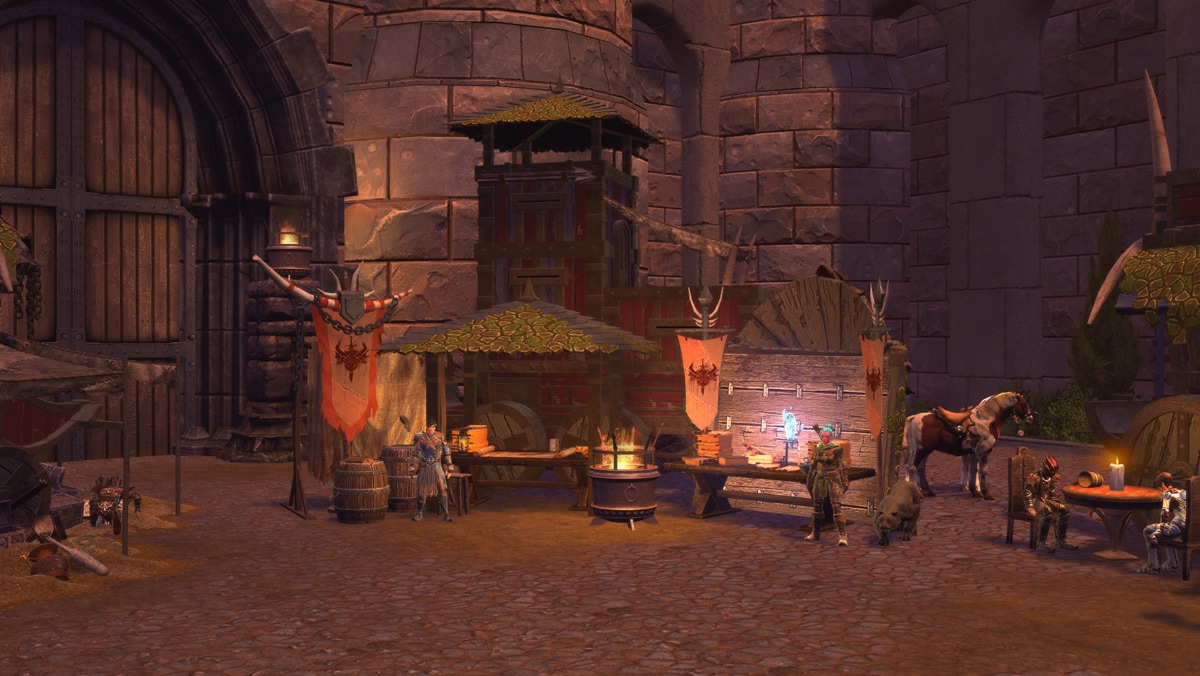 Dragon hunts are a new kind of queue where you can take on young dragons by yourself, adult dragons in a party of three, or the most powerful ancient dragons in a full party of five. As you progress in the Dragon Hunt questline you will unlock access to ancient dragon hunts, and a variety of rewards to be purchased with parts harvested from defeated dragons. 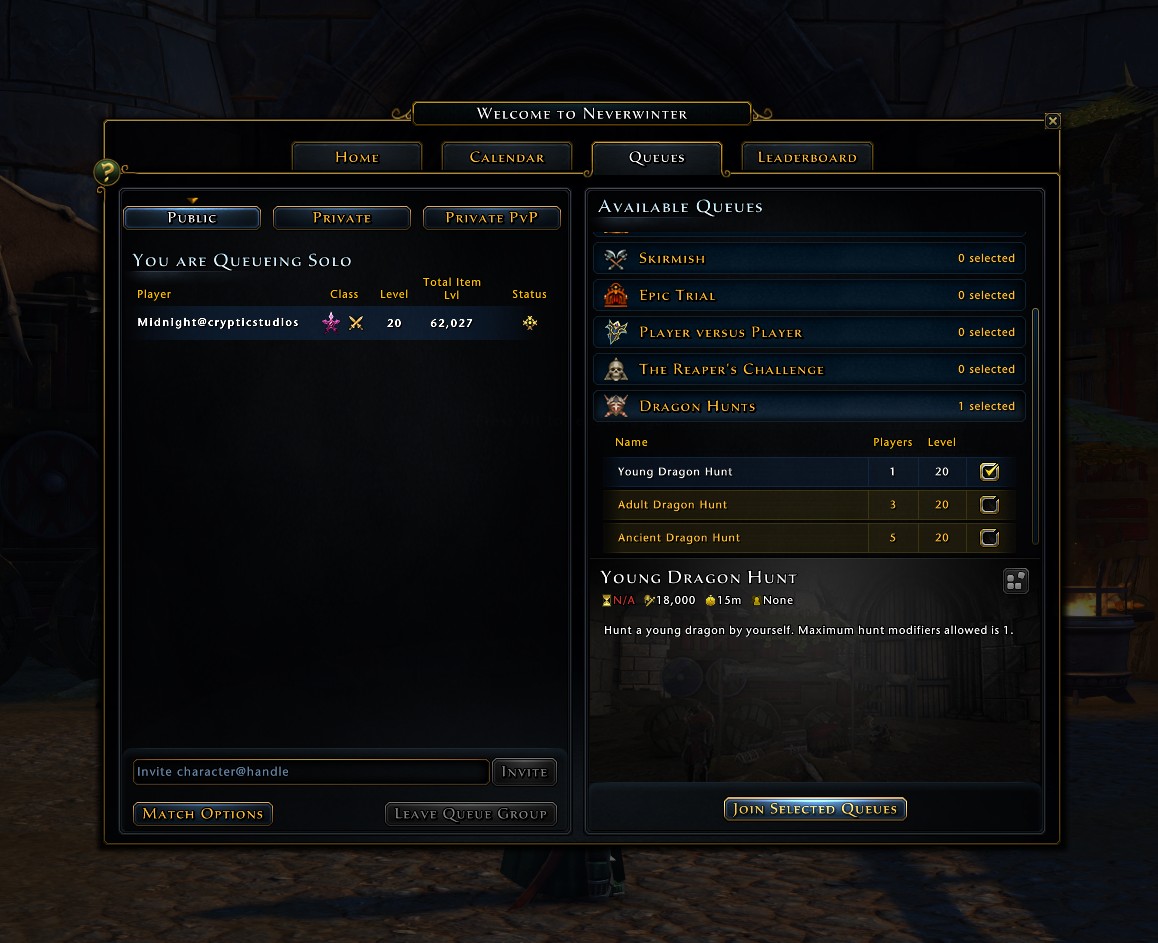 From icy peaks to volcanic depths, dragons make their home in various places across Faerun. You will travel with the dragon hunters to various lairs hunting chromatic dragons affected by the mythal. Dragon hunts will take place across five distinct biomes where the five chromatic dragons have made their lairs and hidden their vast treasure hordes.

More challenging dragons can be hunted by applying hunt modifiers when departing for a dragon hunt. These modifiers change up the way a hunt plays out and empower the dragons. This also increases the rewards gained at the end of a hunt. A new interface will guide players in proposing different modifiers from their collection and the system will then select which modifiers are applied from the group’s proposals. More modifiers can be unlocked and upgraded as you progress. 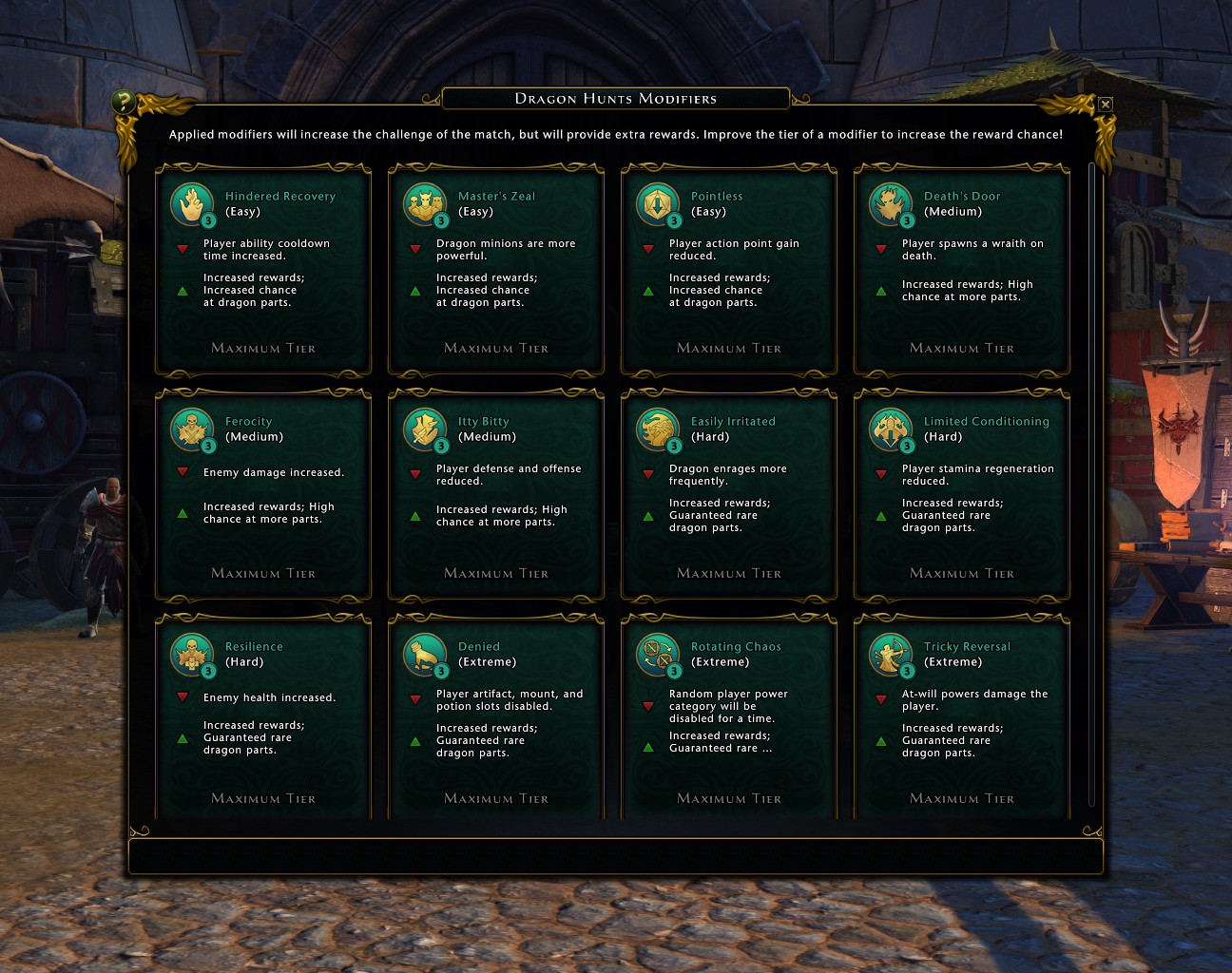 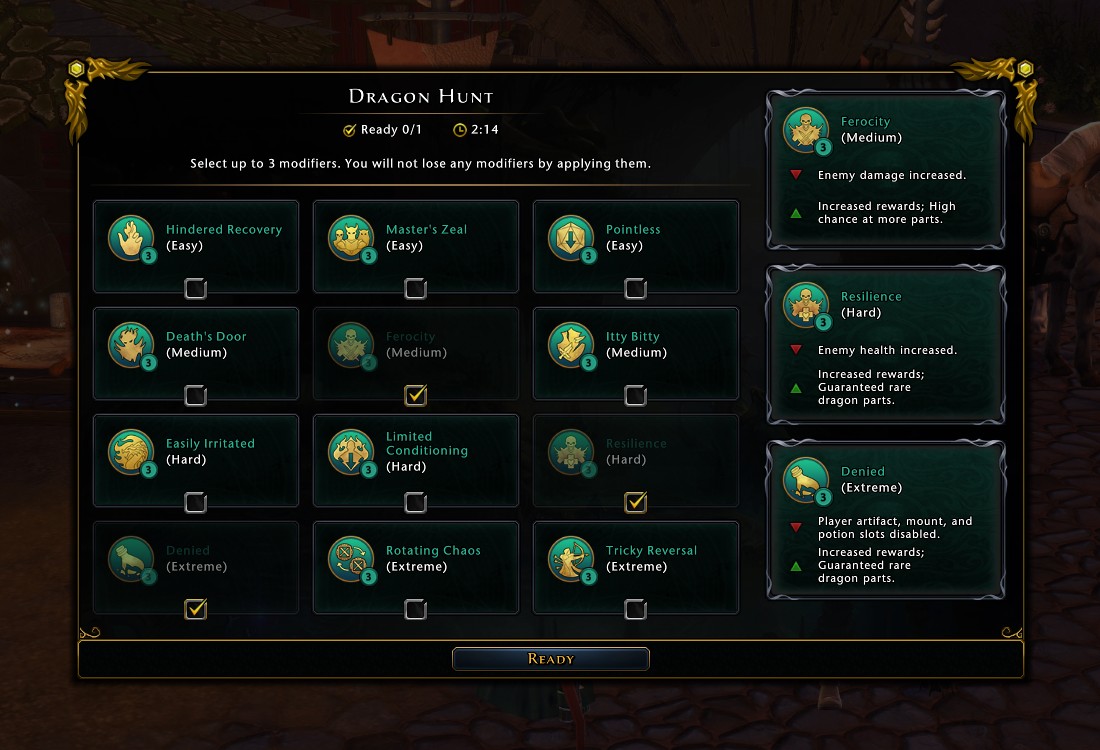 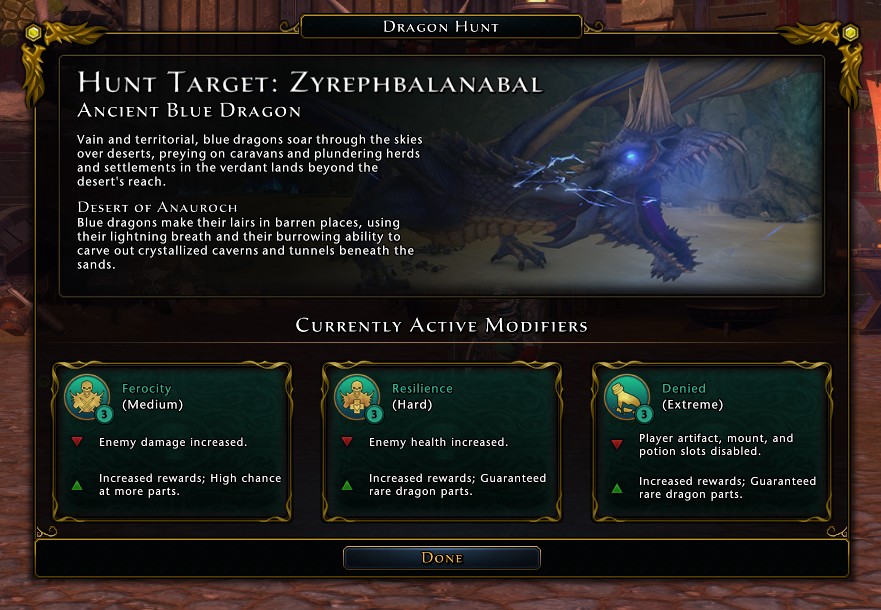 Dragons in Neverwinter have been overhauled and modernized to be mobile, dynamic, and intelligent threats worthy of the D&D name. Along with a major visual update, dragons now command a new suite of powerful attacks and spells. In true D&D fashion, Dragons can now take flight and sweep the lair with devastating breath weapons, or stand on their haunches in an intimidating stance displaying their mastery of magic as flinging powerful spells at their enemies. As they age, dragons’ become more challenging, unlocking the ability to use more abilities with ancient dragons demonstrating the pinnacle of this incredible creature. Whether it be the vicious white dragon or the cunning black dragon, they each chromatic dragon has a fighting style fitting their personality and elemental affinity. This creates a unique challenge to overcome and master as adventurers rise through the ranks to become a top Dragonslayers. 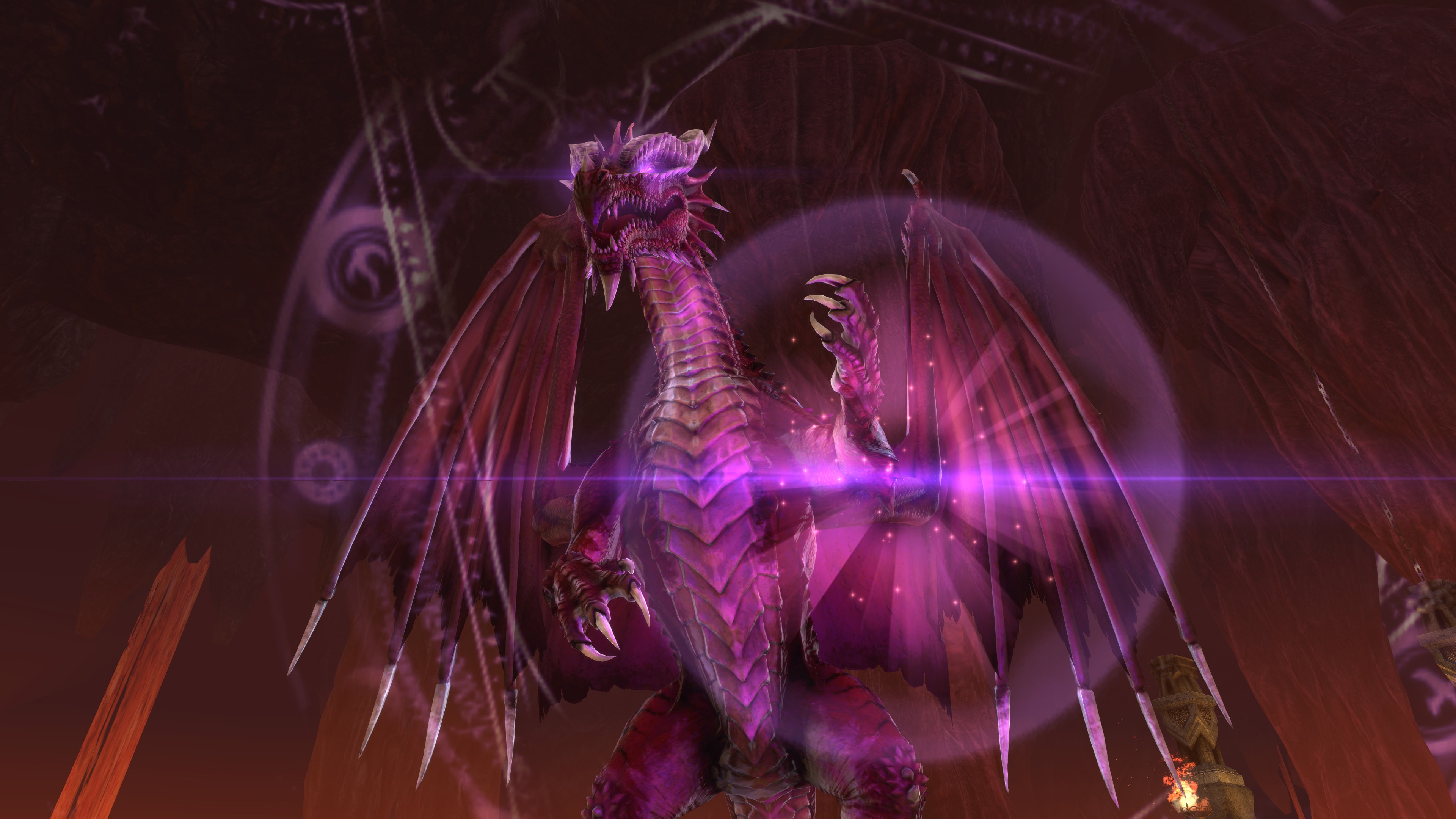 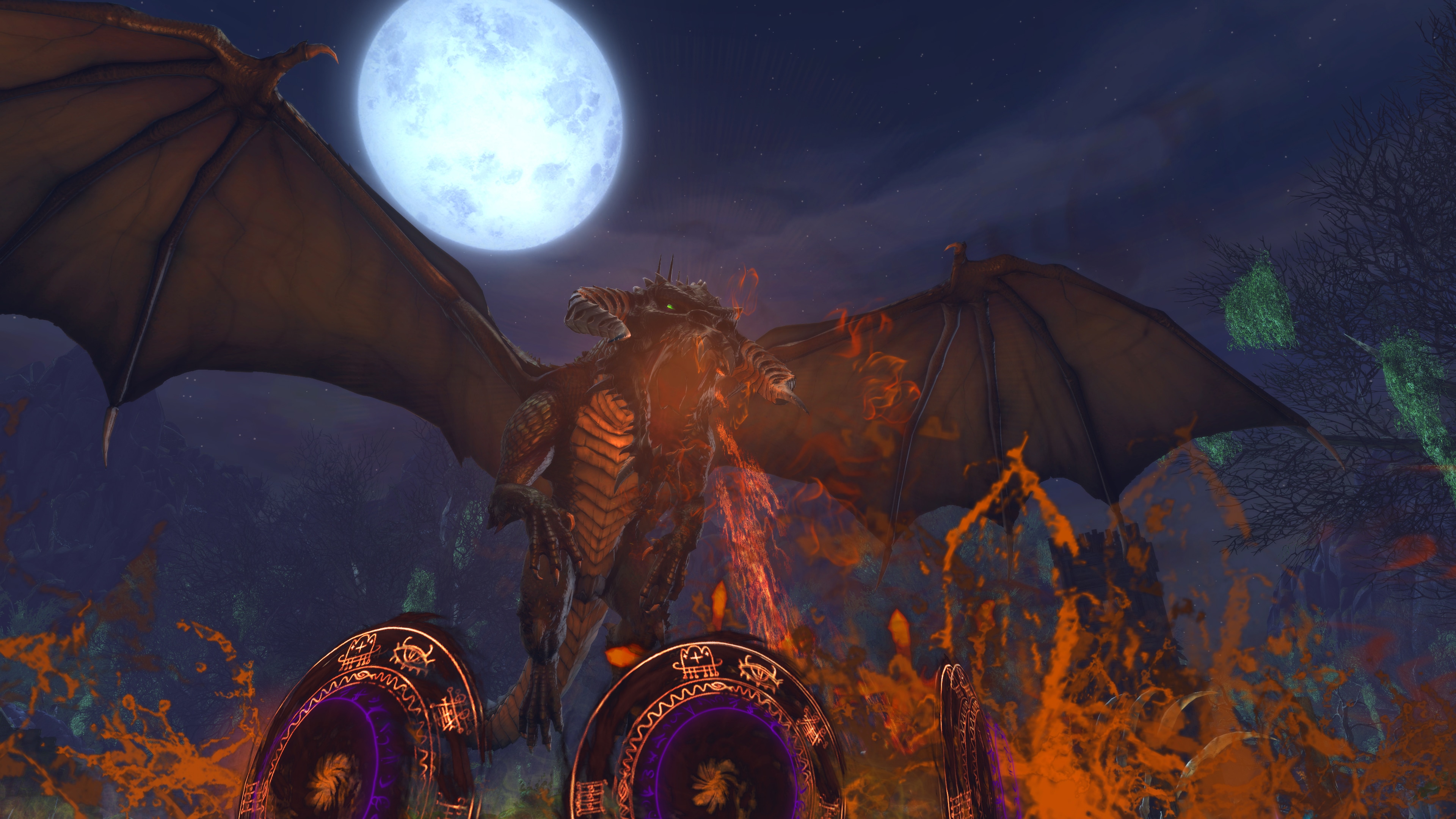 Dragon hunts will have a new Dragonslayer campaign which you will progress by hunting dragons. You will also work to gather Elemental Strands from various Adventure Zones and Queues in order to unlock and upgrade your Dragon Hunt Modifiers, as well as collect epic new dragon hunter gear! 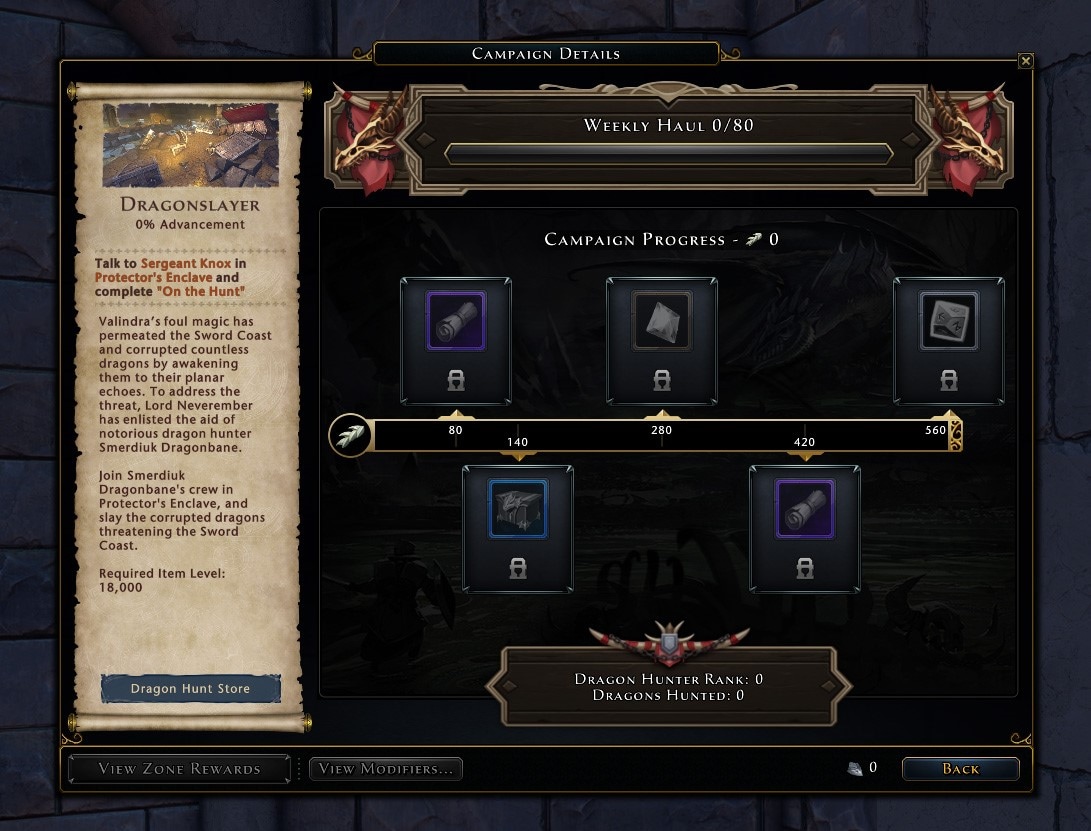