The undercity is an exciting new area to explore in Neverwinter’s new module: Lost City of Omu. These labyrinthine tunnels run underneath the ruined city, and are filled with ancient shrines, fierce monsters, and treasure! Content Lead and Loremaster Randy Mosiondz and Environment Art Lead Nate Herzog bring you more information on this fallen location.

Omu was once a jewel in Chult’s crown, rivaling even Port Nyanzaru in commerce. The Omuans built a rich city with a grand palace for the royal family. The Omuans were envied by many, and they exulted in their status.

But the greed and hubris of its people caused Ubtao, the god of Chult to turn his back on them. Without their god’s support, the Omuans fell to sickness and disease. With the absence of Ubtao, the Omuans turned to worshipping local reclusive spirits known as the nine trickster gods, building shrines to them underneath the city.

But even the trickster gods could not forestall Omu’s doom. The buildings fell to ruin and became overrun with monsters from the encroaching jungle. Violent uprisings caused the nobles to flee the city, and eventually the city was abandoned entirely by the Omuans.

The undercity, as it came to be called by recent explorer’s who rediscovered it, suffered the worse. Large sections of the undercity were cut off from each other by collapsed debris.  Some areas become overgrown, flooded, or fallen into underground lava flows. While hazardous to navigate, there are still many creatures and treasures to be found there, the lost legacy of Omu.

When working on the environment for the Omu undercity Randy and I wanted to give each of the 9 shrine rooms a different look and feel that would include different layouts, separate unique lighting and sky files for each section.  We also wanted to represent each God having a different alignment so each of the Gods rooms are at different elevations underground giving you the feeling you are descending deeper as you approach the Chaotic evil God, Wongo the Su-Monster. 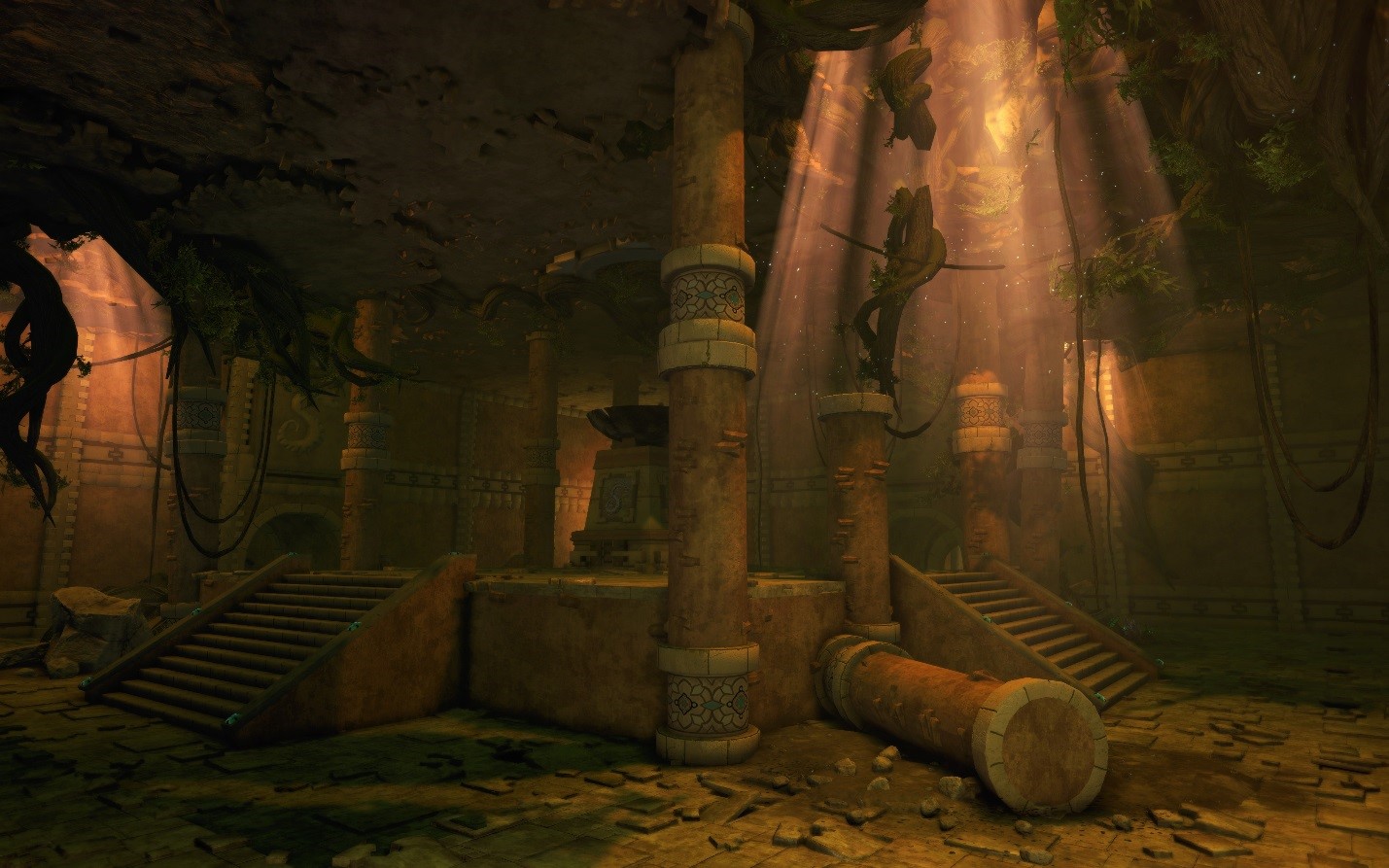 The uppermost shrine room belongs to MOA, THE JACULI.  Moa is a truthful and kind god who never tells a lie.  With this room I wanted to have the lighting only coming from the multiple light shafts.  The roots penetrating the ceiling give you the feeling you’re close to the surface. 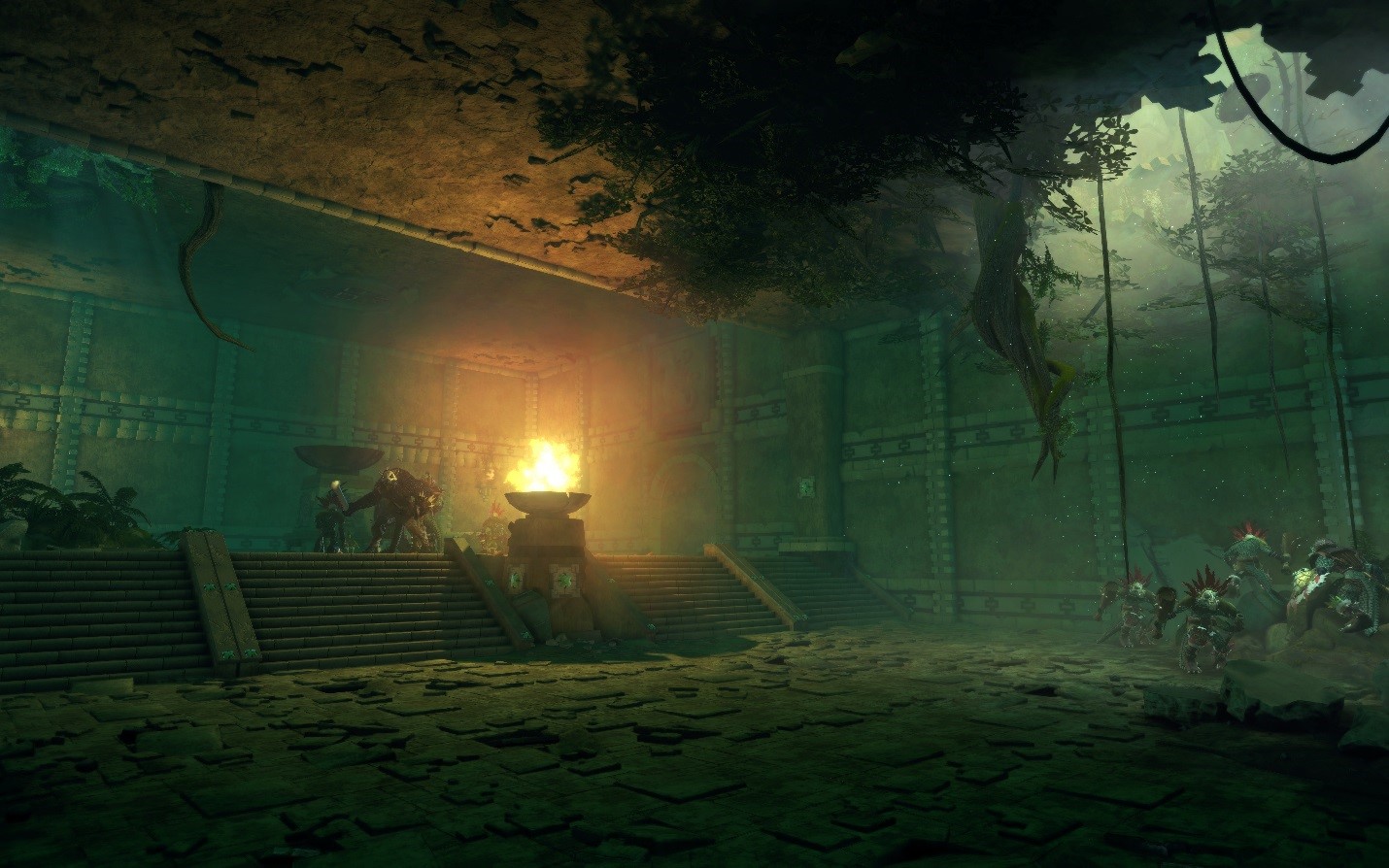 Next comes SHAGAMBI, THE KAMADAN.  Shagambi is a wise and savage god who never shows mercy to evildoers.  This room continues with slightly toned down light shafts and roots, there’s a different feel to this room with lighting and the ground fog. 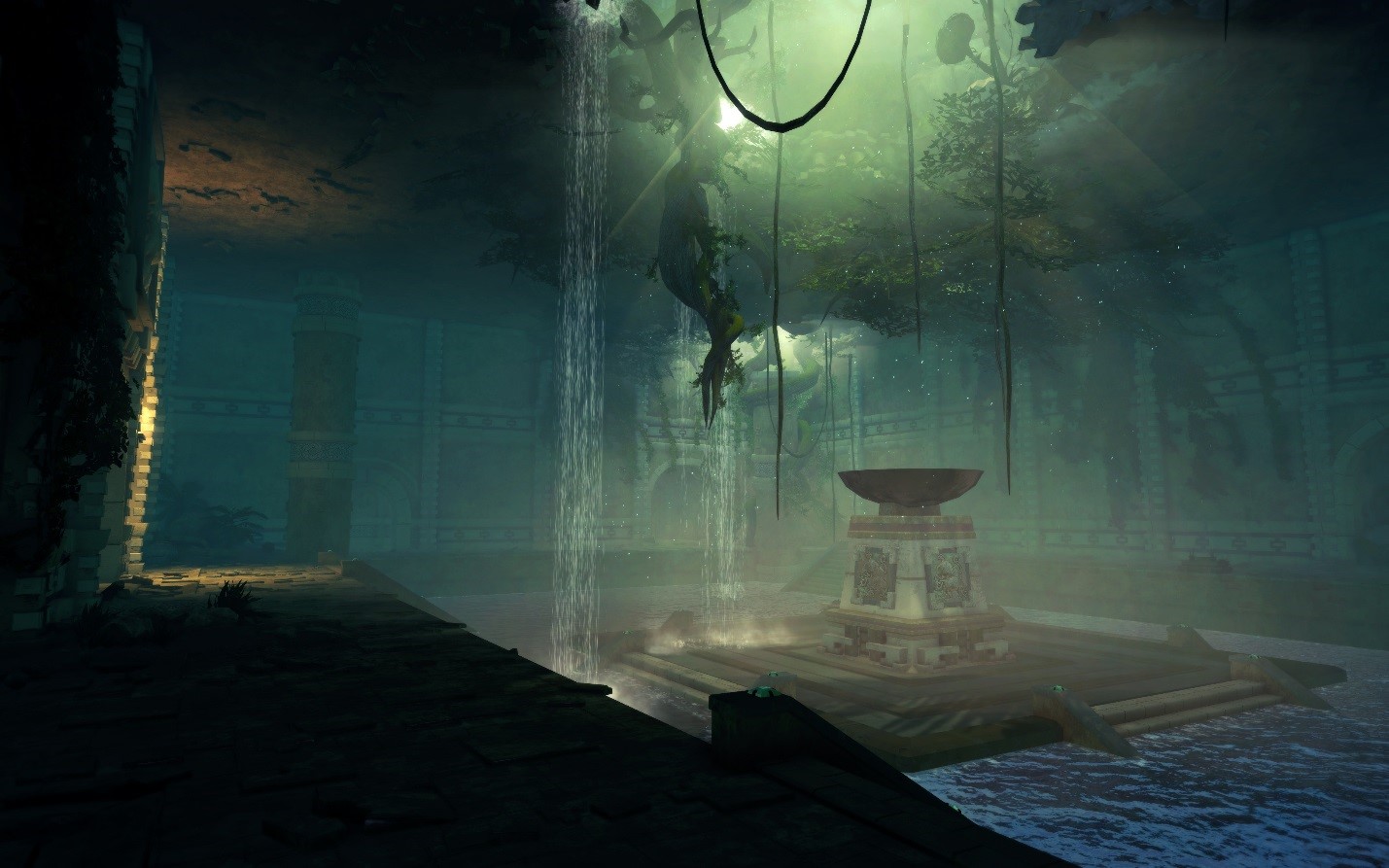 As you continue down deeper you come to KUBAZAN, THE FROGHEMOTH.  Kubazan is a wild and spirited god who is fearless and not afraid to take risks.  Froghemoths are  elephant-sized amphibious predators with four tentacles and three eyes so I wanted to use water in this shrine room.  Because you’re close to the surface the river that runs through the ruins of Omu above you water pours through the damaged ceiling. 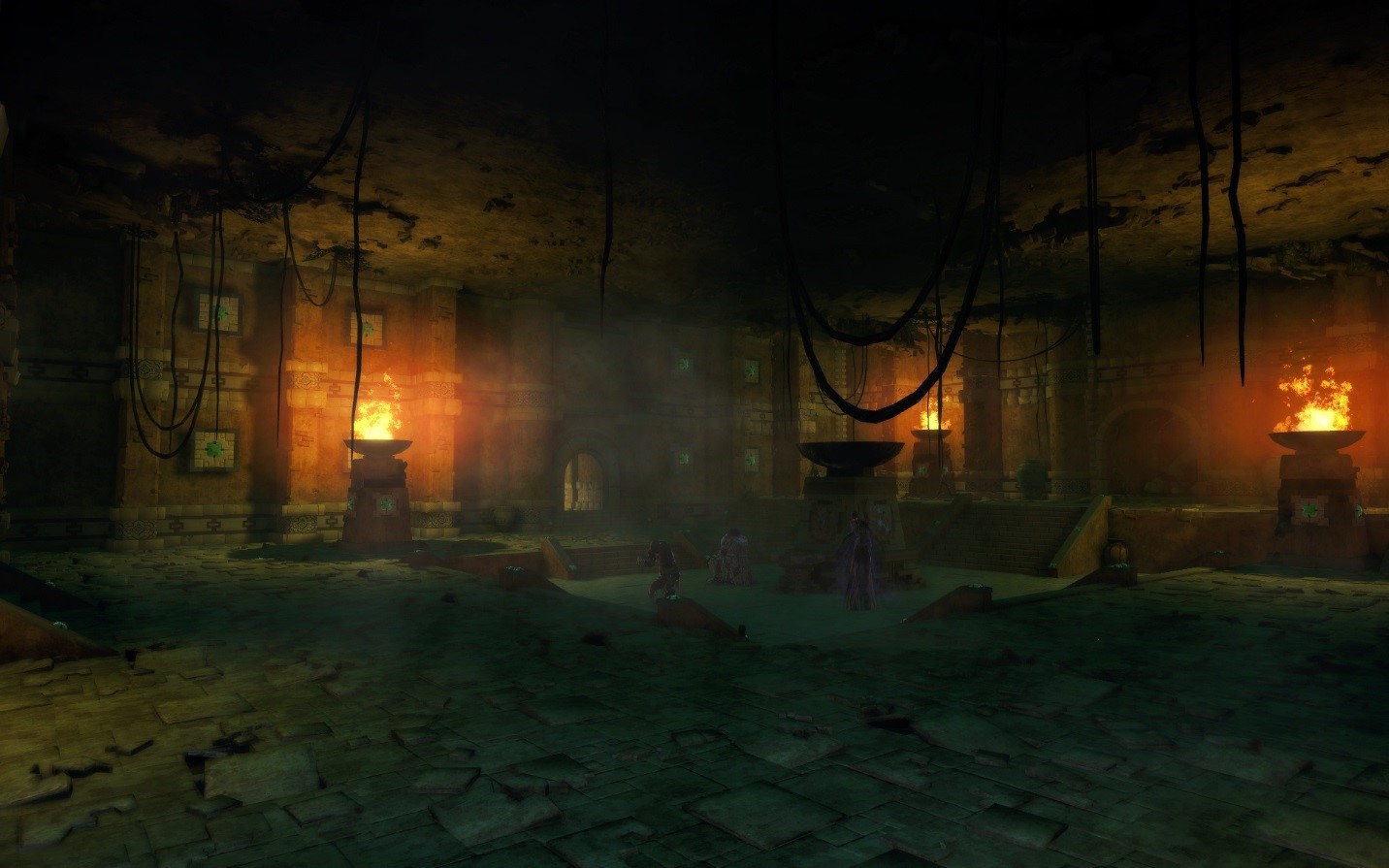 To the west and lower still you’ll find OBO’LAKA, THE ZORBO’s shrine room. Obo’laka is an obsessive compulsive god who is an overly cautious slave to routine.  Because Obo’laka has some obsessive compulsive tendencies you’ll notice the room is clean, no rubble piles, dirt or grime, just the way he likes it.  This room is also deeper down so you only find small vines and roots growing through the ceiling. 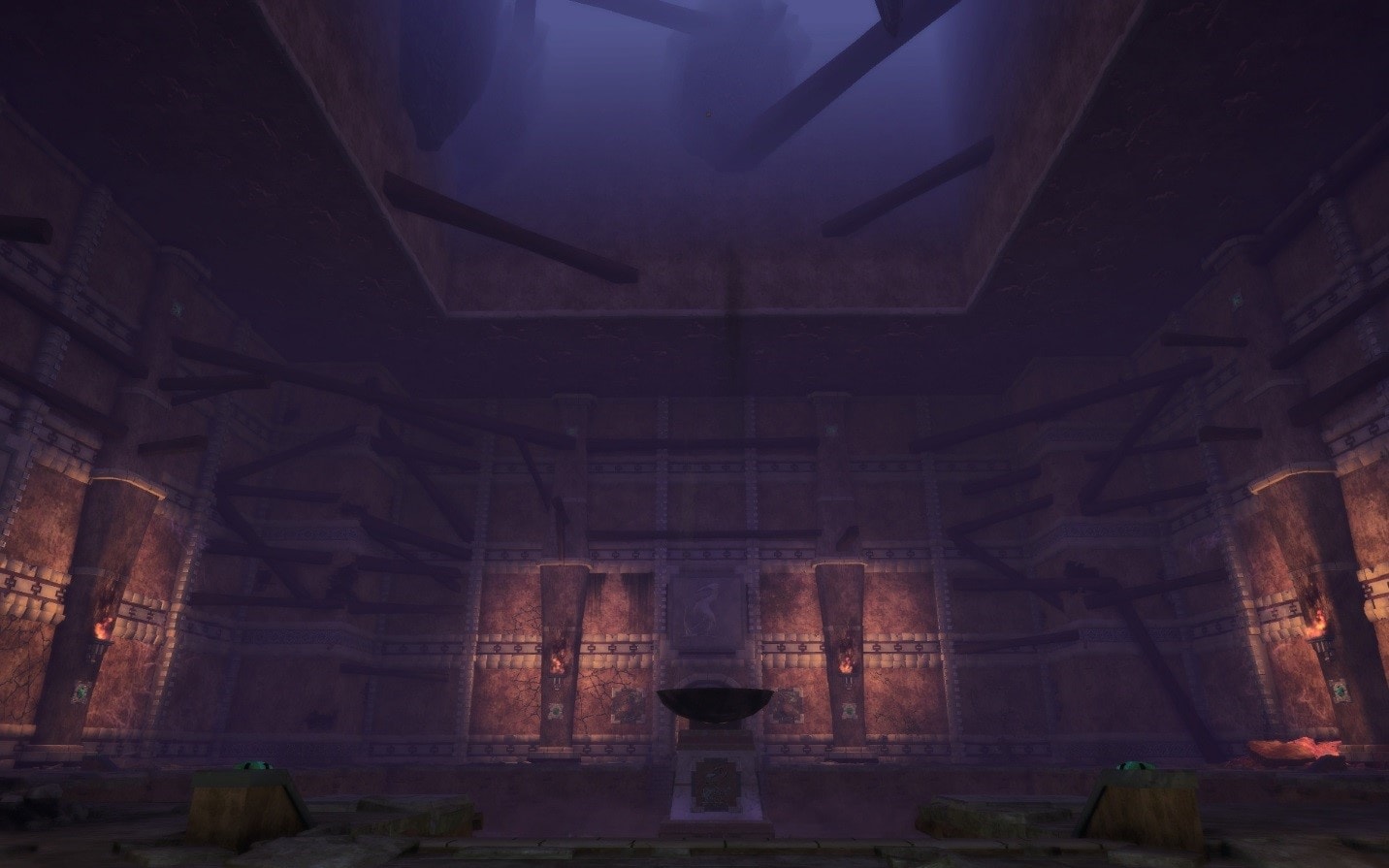 Moving deeper the player comes to PAPAZOTL, THE EBLIS’s shrine room.  Papazotl is a shrewd and conniving god who bows before no one and expects others to do as he commands.  Because Eblis are large birdlike monstrosities with wings that roamed the jungles of Chult. I gave this room a very high ceiling with some nice places to land and a shaft leading to the surface bathing the room in bounce light from above. 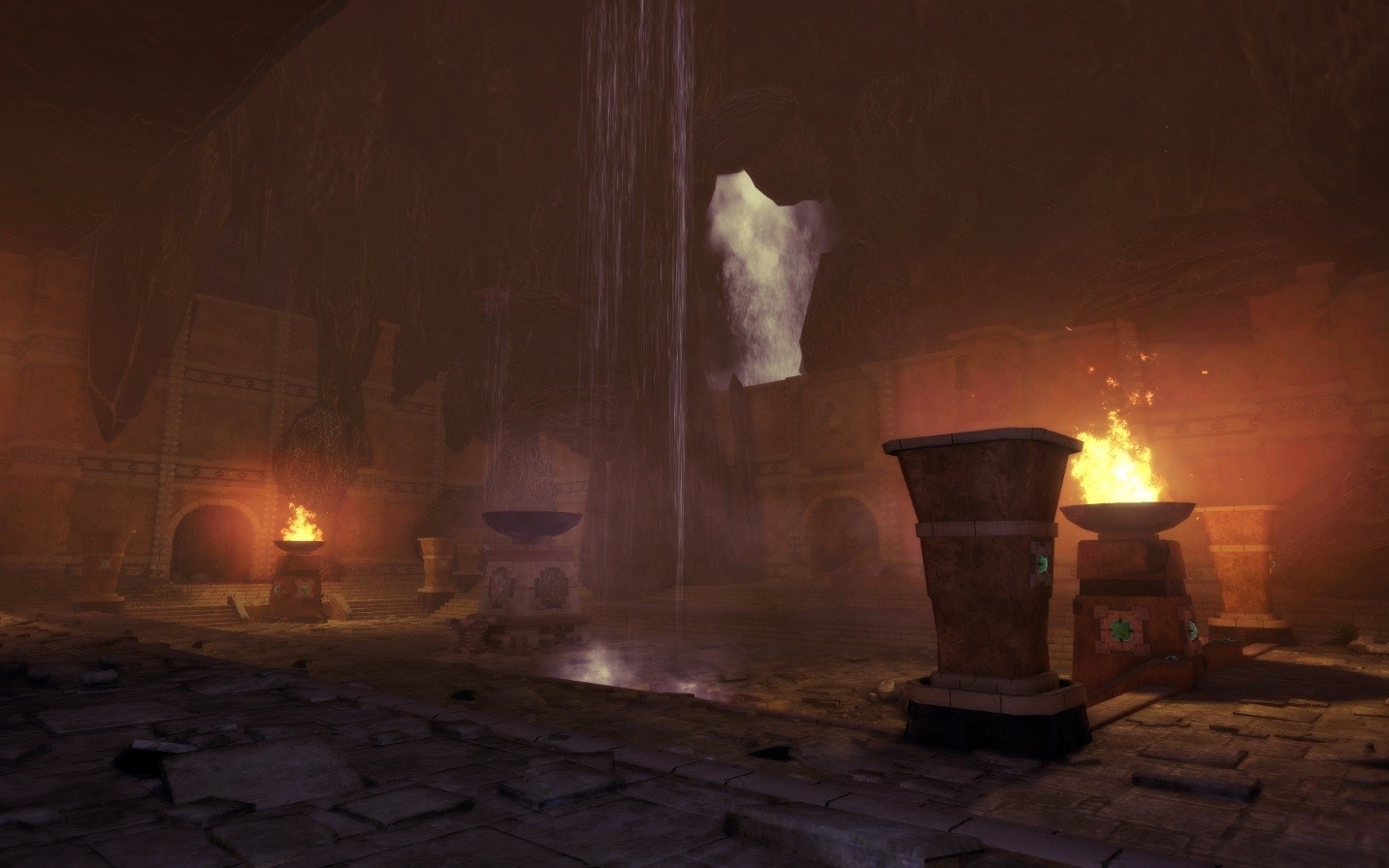 This is NANGNANG, THE GRUNG’s shrine room. Nangnang is a skittish and cruel god who won’t share with others.  Because Grung’s are poisonous frog-like amphibious humanoids I gave this space some water pouring down into the room from high above but it also needed to feel hot because of its proximity to the final and deepest lava room. 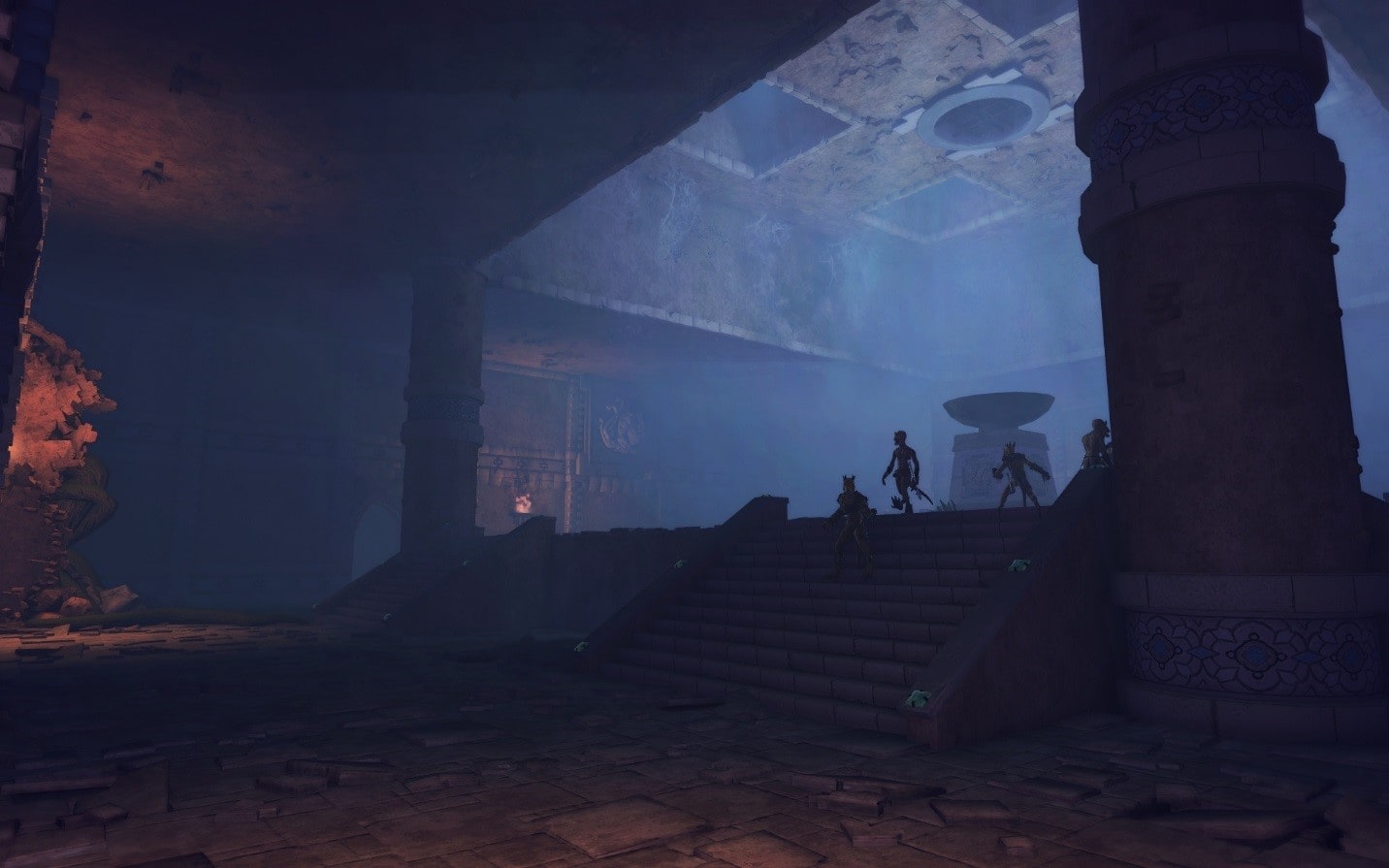 The center shrine room belongs to UNKH, THE FLAIL SNAIL. Unkh is a self-absorbed and overly contemplative god who is incapable of making decisions.  Light shafts from the center of the room give some blue bounce light that works well with the torch lights. 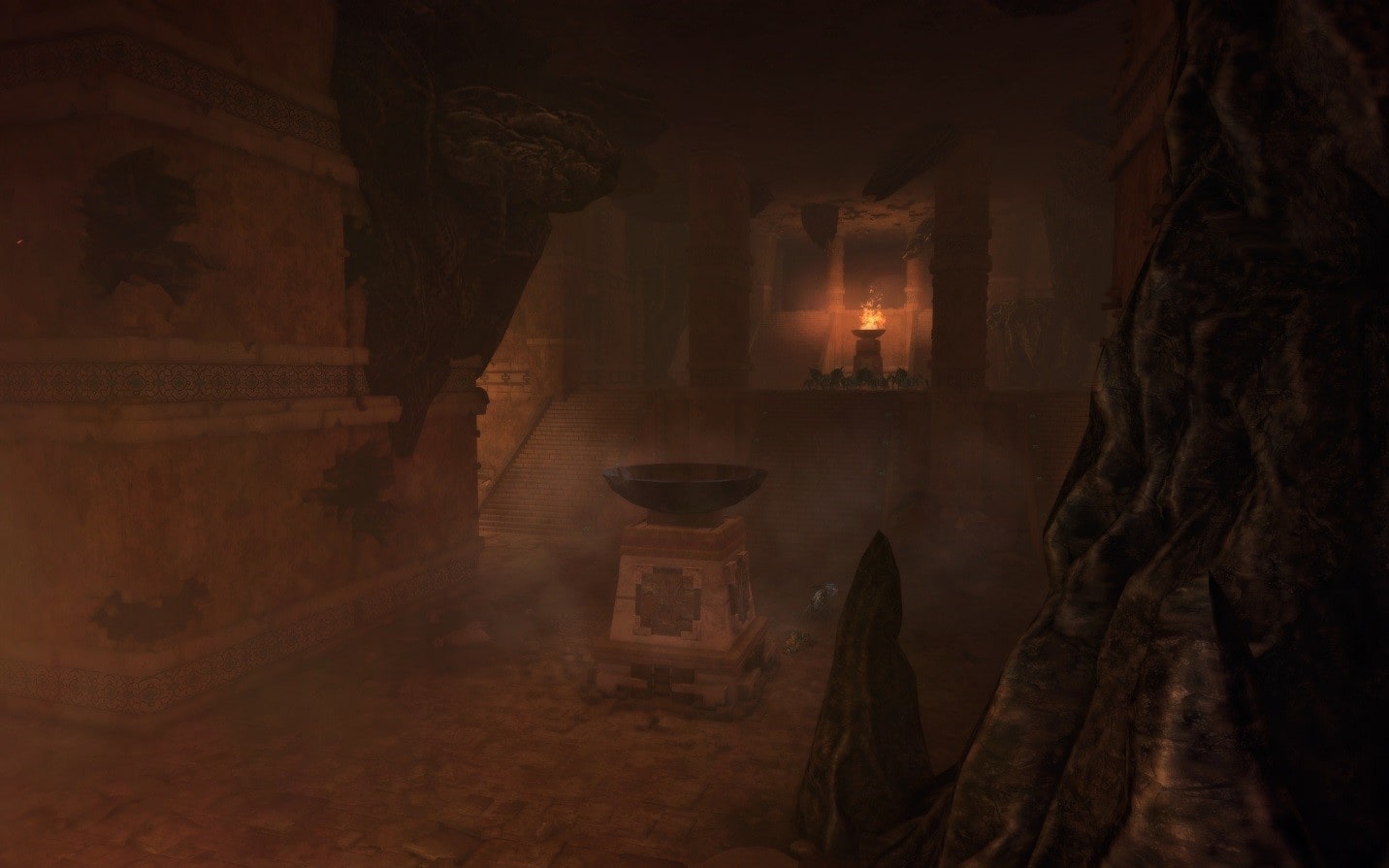 To the east is I’JIN, THE ALMIRAJ’s shrine room.  I’jin is a fickle and unpredictable god who never sticks to a plan.  I gave this shrine room a large descending feeling and implemented lighting similar to Nangnang’s room to imply the feeling of heat. 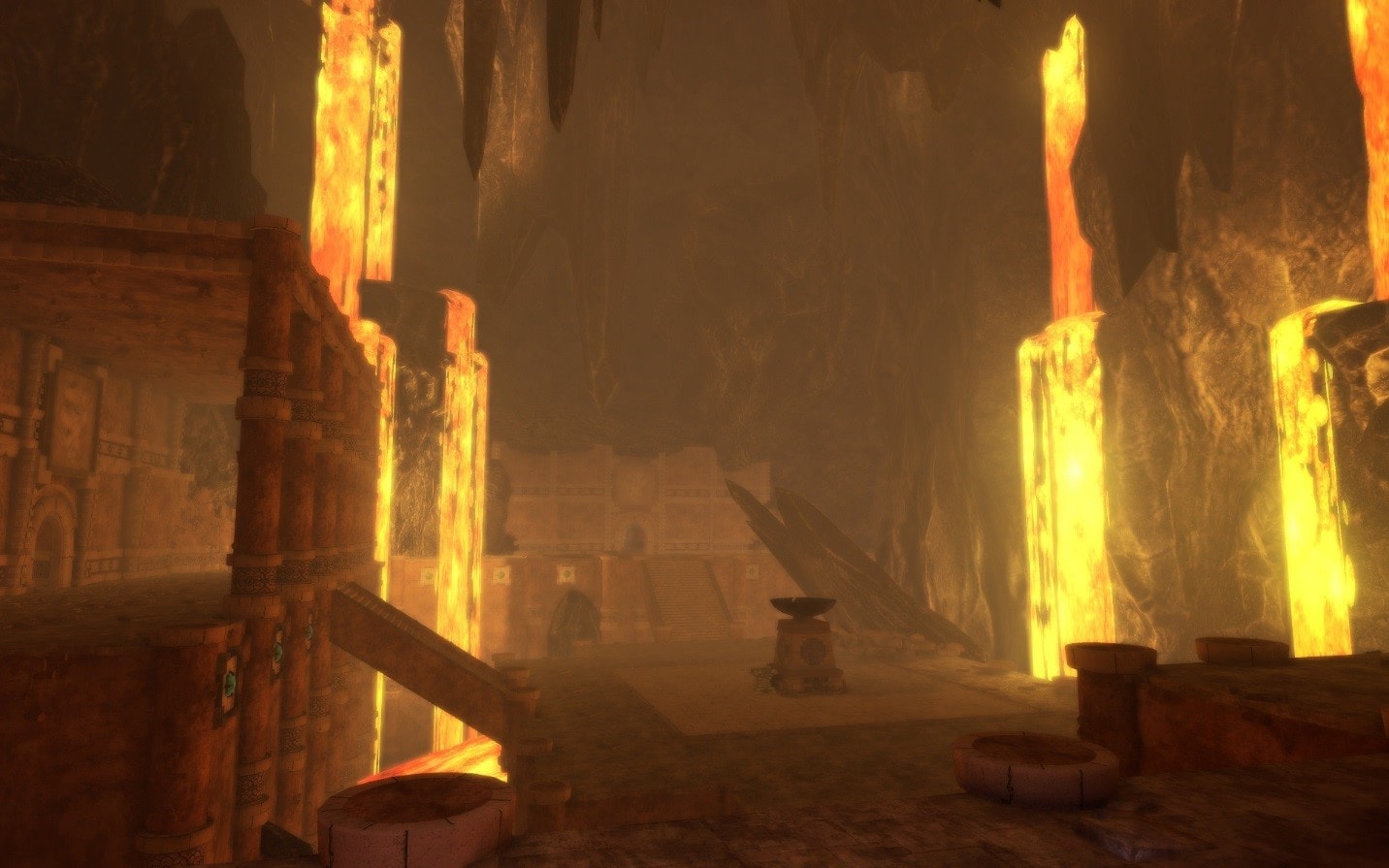 The deepest room belongs to WONGO, THE SU-MONSTER. Wongo is a violent and deranged god who acts recklessly without concern for others.  The room itself is very dangerous, and plays on the fact that Wongo has no concern for you.  Players can fall into the molten lava at any time if they’re not careful.