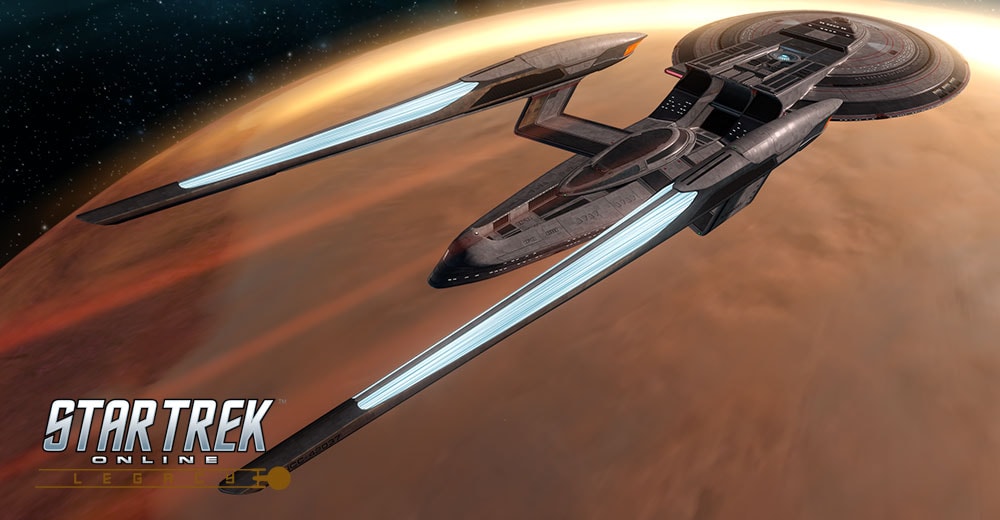 The form evolves as the mission grows, but the core cruiser design of Starfleet has stood the test of time, alternate time, backwards time, anomalous time, and everything in between. Get good systems and a great crew, protect them as much as science allows, and allow them the flexibility to see the mission completed through all the bizarre exigencies they don’t teach in textbooks. The Excelsior II is maneuverable and formidable, able to place itself where it needs to be without fear and render aid or unleash hell as the captain decides.
Continue reading further on for the full details on this new starship offering, coming to the Infinity Lock Box on PC on December 6th!

Created by the Federation in response to a changing galaxy, the Excelsior II employs a number of technologies and strategies normally left to the shadows of the intelligence services. While not itself a spy vessel in the strictest sense, the fusion of information technology and combat readiness with a well-rounded and durable hull, combined with a bit of extra engine power to keep the platform flexible, has culminated in a formidable vessel. The Excelsior II is equipped with the ability to Mask Warp Signatures and employ Active Sensor Arrays.  The former allows the starship to cloak while not in combat, and the latter allows intel craft to gather information about their target to expose a vulnerability.
The Excelsior II comes equipped with Experimental Power Redirection.  This unproven technology allows a combination of Beam Overload and Beam Fire At Will maneuvers to be performed at once by dumping tremendous amounts of power through the weapons arrays, as well as a few auxiliary Phaser arrays configured directly to the console itself. Power to non-Weapon subsystems provides an additional bonus to Energy Weapon Damage during this period. As Foes fall, the energy released by their power sources accumulates in the exposed Phaser banks, increasing the rate at which these additional attacks occur. The result is a tremendous volley of energy weapons fire that cannot be sustained for long, but which Foes are unlikely to endure for long either.
This ship comes with a Commander Engineering / Intel Specialist Bridge Officer seat and a Lieutenant Commander Science / Miracle Worker Specialist Bridge Officer seat.

Activating this Console grants the ship an unpredictable mix of Fire At Will III and Beam Overload III, a large bonus to Energy Weapon damage based on the sum of Shield, Engine, and Aux power, and a suite of overloaded Phaser attacks which strike out at all nearby Foes. As Foes fall, the energy released by their power sources accumulates in the exposed Phaser banks, increasing the rate at which these additional attacks occur.
This experimental system pushes tremendous amounts of power through the ship's beam arrays to create a truly spectacular cacophony of weapons fire. Auxiliary Phaser Array banks channel the excess power to avoid overheating issues, though they are only rated for burst use and cannot be employed like traditional Phaser Arrays. The power drain involved is immense, and while R&D maintains hope that it may be stabilized for more consistent use, the system has found a niche on the battlefield as a contingency weapon.
The console also applies bonuses to Energy Weapon Damage and Starship Weapon Amplification.
This console can be equipped in any starship, in any console slot. You may only equip one of these consoles on any single ship.

While this trait is slotted, activating a Beam Fire At Will or an Intel Bridge Officer Ability improves both Beam Damage and all Damage Resistance Rating in the side arcs. If Threatening Stance is activated, the Damage Resistance bonus is doubled; if not, aggro generated by attacks is massively reduced.
Tooltip:
Jonathan Herlache
Systems Designer
Star Trek Online