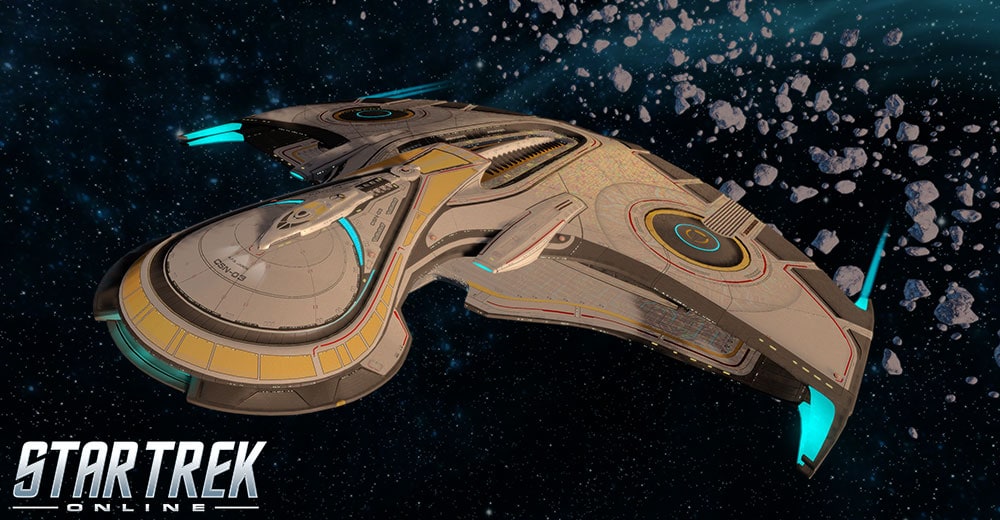 As Star Trek Online celebrates its 12th Anniversary, we will be following our long-standing tradition of allowing players the opportunity to earn a free starship by participating in our Anniversary Event.

And in following a more recently-established tradition, this year’s starship will represent the next in a line of breathtaking vessels we have designed as products of the in-world Alliance, represented primarily by the Federation, Klingon Empire, and Romulan Republic. The latest in the line of Alliance starships will be available to players of all factions upon completion of the Anniversary Event – the Jarok Alliance Carrier [T6].

Earning the ship will require completing any of the various activities available through the Anniversary Event each day, and gathering enough Daily Progress to fulfill the Event’s overall quota. Players may participate in any of the available activities to earn their Daily Progress once per day, per account.

Once you have earned sufficient Daily Progress, you may claim this Starship for your entire account. Just open the Event Reclaim Store to claim an Jarok Alliance Carrier [T6] for each captain on your account.

The Jarok Alliance Carrier represents the latest in the Alliance shipyards' attempts to marry the distinct styles of design and engineering from its primary member factions. The results of this particular design project - led primarily by Romulan Republic engineers - speak for themselves in terms of the role the ship is intended to play in the Alliance's fleets. Its surprising mobility, enormous sensor arrays, and massive hangar capacity place it squarely into a role as a mobile research station - a vessel that is equally capable of leading defensive fleets from the forefront, and of supporting scientific pursuits and dangerous exploration missions.

This sophisticated suite of sensor bafflers is meant to mask the energy signature of smaller vessels across a wide expanse of the battlefield. Activation will cause all hangar pets and other summoned allies to be untargetable by enemies within 10km of them, allowing them ample opportunity to line up critical hits on unprotected components. The initial burst of this activation also includes coordination protocols that will immediately reset the hangar bay launch cooldowns of your own vessel and other allied starships with hangar bays.

Activating any Shield Drain or Energy Drain Bridge Officer ability will add a Charge to your starship, up to a maximum of once per 15 seconds. Whenever a Shield Facing is depleted, it will immediately be restored to full capacity, and consume one Charge. Each Charge has no maximum duration, but only four Charges may be stored.

These agile vessels are specially designed to work in small strike groups, designed primarily for focused takedowns of high-value targets.

They are capable of being used on any vessel with a Hangar Bay, but may only be obtained if you have completed the 12th Anniversary Event, and claimed the Jarok Alliance Carrier [T6].