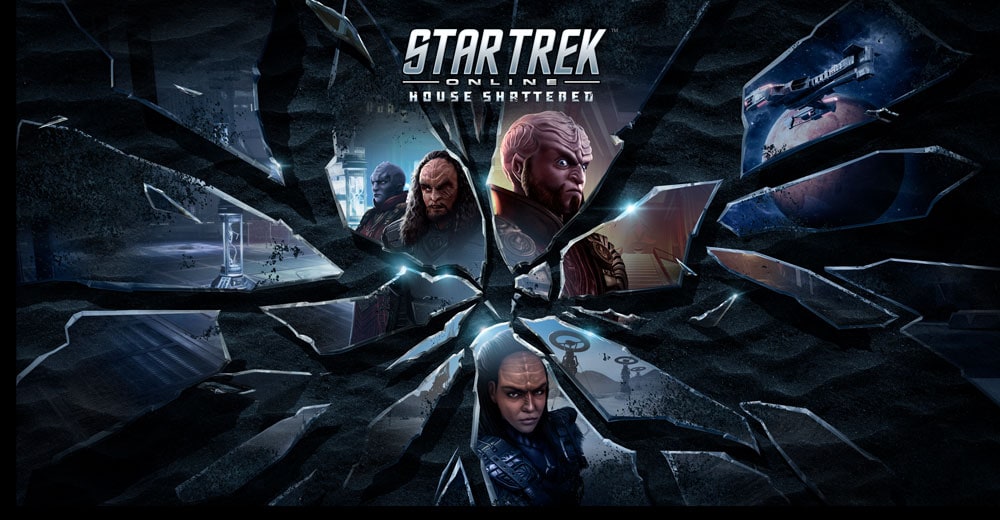 First, the House was Divided, now it will be Shattered. Following the events of June’s House Divided, Captains found themselves on the run, accused of a crime they didn’t commit. Chancellor J’mpok of the Klingon Empire has gone mad with power and jealousy, partnering with Aakar, Gowron’s grandfather, to devastate the peaceful planet of Khitomer. Attempting to destroy all his enemies at once, he framed this crime on the renegade Klingon Matriarch J’ula, legendary General Martok, and you. Now, this ramshackle alliance must find a way to clear their names and try and set things right. With help from the mysterious Witch of Nimbus III, Adet'pa, they might do it, but even that won’t set everything right. If J’mpok is removed from power, there is nothing standing in J’ula’s way of seizing control – and she may be no better than the Mad Chancellor.

House Shattered is our latest story update to Star Trek Online. In it, you’ll find a brand new episode, “Partisans,” where Captains can team up with Martok, J’ula, Adet'pa and the crew of the Orion Syndicate ship The Coldstar, in a race to find the evidence to clear their names. J.G Hertzler as Martok, Robert O’Reilly as Aakar, and Rekha Sharma as Adet'pa all return to Star Trek Online in this brand new adventure that advances the story began in House Divided.

In addition, a brand new Task Force Operation, Synth Wave, takes Captains to the infamous invasion of Mars from Star Trek: Picard. With Utopia Planetia’s android workforce in revolt, how many lives can you save? This scenario brings a brand new gameplay style, with an ever-shrinking environment and wave after wave of Synth ships closing in.

With House Shattered, we’re also adding a brand new ship to the Infinity Lock Box, the Mirror Warship. This Constitution-class ship is overhauled by technology from the Mirror Universe, and turned into a devastating flagship of the Empress. Five new items from Star Trek: Enterprise are joining the Lobi Store, allowing access to long awaited items like the M.A.C.O. Rifle.

The Experimental Upgrade System is live today as well. For a limited time, everyone in the game gets one of these tokens for free, allowing them to add a Device Slot, a Console Slot, and a new Trait Slot to their favorite T5-U or T6 ships. This brand new system brings exciting new options to your favorite ships. Additional tokens are available in the Ultra Rare tier of the Phoenix Prize Pack, and the Zen Store.

Finally, as part of the Year of Klingon, we’ve updated the Warzone Mission Arc for Klingon characters. Play through two completely remade maps, gameplay improvements across all missions, brand new cutscenes, and the debut of Shannon Cochran as the voice of Lady Sirella. Female Klingon Captains will find new head options available, as well.

We can’t wait to see you fight to clear your names, Captains. Qapla!