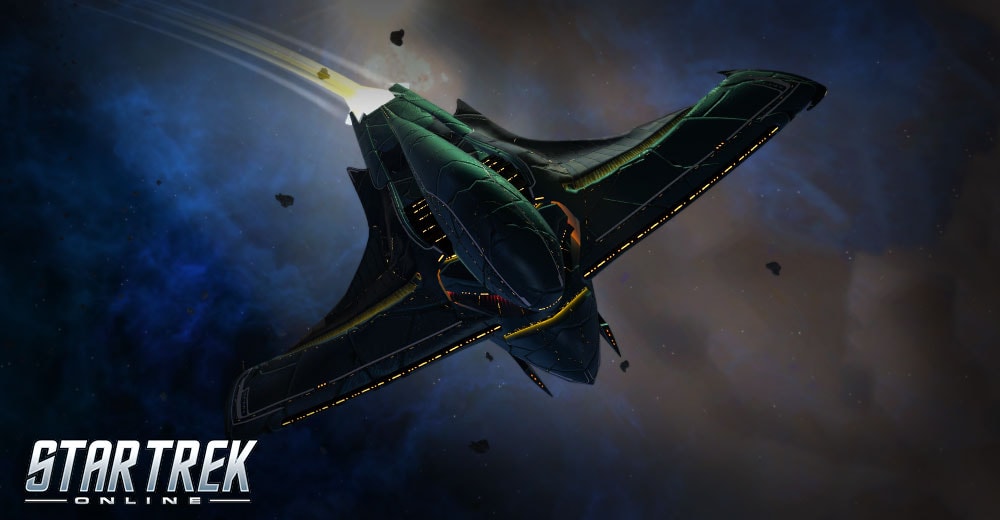 The Lobi Crystal Consortium is pleased to announce their latest featured sale! From Thursday, April 9th  at 8AM PST til Monday, April 13th, at 10AM PST, shrewd Captains will be able to choose from their wide selection of wares, just by visiting the in-game Lobi store. All items in the Lobi Store will be 20% off for this entire sale! Now’s the best time to take command of a Kelvin Timeline Intel Dreadnought Cruiser, or get your hands on a Boolean Heavy Assault Cannon, or fly the stars in a Vaadwaur Astika Heavy Battlecruiser. But that’s not all – for the duration of this sale, the Tzenkethi Tzen Tar Dreadnought will become available in the Lobi Store! This powerful, alien cruiser can be yours for a discounted price of 960 Lobi! Read the details on this magnificent ship below, and head to the Lobi Store to claim one for your own!

The Tzen-tar Dreadnought Carrier epitomizes the Tzenkethi reliance on resilient shielding and coordinated tactics. By utilizing its massive offensive and scientific capabilities in tandem with wings of expertly-piloted frigates, the Tzen-tar commands and controls any battlefield it enters.

As a Miracle Worker starship, this vessel gains bonuses associated with that classification. In addition to increased Subsystem Power and a Universal Console Slot, this also includes the Innovation Ship Mechanic.

Which abilities must be activated, and which Innovation effect is triggered, are both randomized each time the mechanic refreshes. It will refresh after a brief lockout period which follows each triggered effect.

These custom-built launchers allow Tzenkethi ships to safely store and transport the otherwise volatile substance known as protomatter, while also serving as supplementary weaponry in case of attack. Each launcher is filled with a number of projectiles, and disperses them quickly when set to firing mode, acquiring targets automatically from available enemy energy signatures. The explosions caused by these weapons deals both Kinetic and Radiation damage, and have a chance of leaving behind deadly Radiation hazard clouds upon impact.

This console may be equipped in any console slot on any Tzenkethi starship. You may only have one of these consoles equipped at a time.

A ship with this trait will automatically launch a protomatter-laced explosive at the nearest foe when activating certain abilities. Each explosive device inflicts a combination of Kinetic and Radiation damage, and has a chance of leaving behind a short-lived Radiation hazard which can deal additional damage to foes caught within it. These explosives move quickly, but target your foe's current location and therefore have a lower chance of impacting against highly mobile foes.

These nimble and resilient Frigates support their carrier by supplying considerable firepower to any conflict. They are capable of brief uses of Lock Trajectory, allowing them to keep their forward-facing weaponry trained on foes with increased reliability.

Compared to other Frigate Hangar Pets, these have increased Shield Capacity at the cost of lower Hull. They may only be obtained if you own the Tzen-tar Dreadnought Carrier, but may be equipped on any starship that has a Hangar Bay.

Availability = Pre-equipped, or Most Shipyards

With the introduction of the Protomatter Barrage Launcher, a new Console Set can now be completed by players that equip it alongside either (or both) of the Consoles obtained from the Tzenkethi Lock Box ships. This set is comprised of: