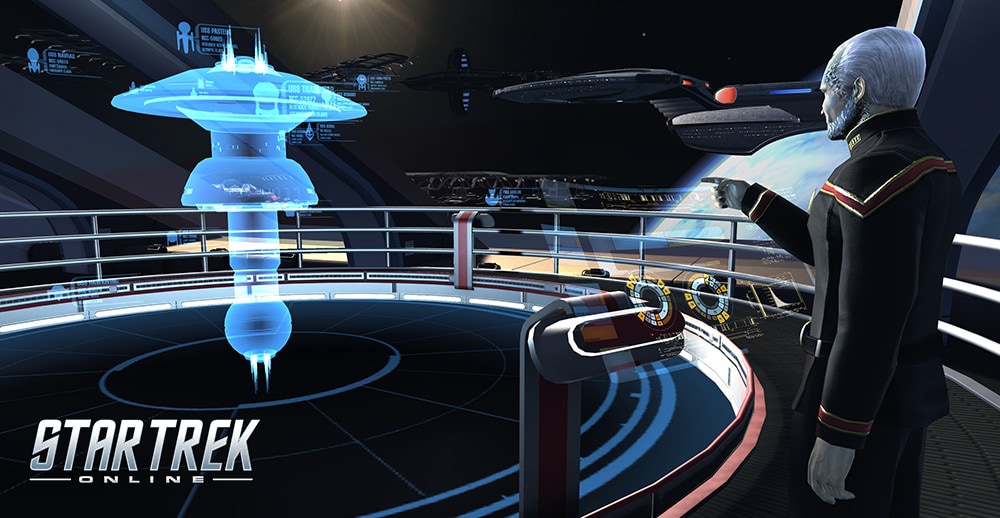 During your captain’s meteoric rise through the ranks, you have taken command of multiple starships, and facilitated the career advancement of countless crew members. As an Admiral / General / Subadmiral, the administration of large portions of the Alliance’s combined fleets has come to rest in your capable hands. The starships you have earned access to will now be waiting for your commands, ever at-the-ready to head into the unknown on your behalf.

Via the Admiralty System, players will send their Admiralty Ships on challenging assignments, in hopes of retrieving valuable assets and advancing your influence and prestige. Progress will be earned in various Campaigns, undertaken on behalf of the major political powers of the galaxy. Players who wish to use their stable of ships as efficiently as possible can perform Campaign Tours of Duty; special assignment chains that yield astounding rewards.

The roster of Admiralty Ships at your disposal is comprised of all starship classes you currently have access to. This includes all commissioned starships, starships in dry-dock, and starships that have been dismissed from your active roster. Your Admiralty Ship roster does not include starships still inside Reward Packs, or starships which have yet to be claimed.

Upon gaining access to a new Starship class, a corresponding Admiralty Ship will automatically be added to your Roster. Your Admiralty Ship Roster is limitless; every ship you have access to will be ready to use. Captains will have a single Admiralty Ship per class of ship they have access to, but “Fleet” and “Mirror” versions of existing ships are counted as separate classes for this purpose.

Rarity is defined by the method through which the ship is acquired (e.g. Dilithium, Lock Box, Event, etc.)

Stats represent the Admiralty Ship’s ability to succeed on certain Assignments, and are broken down into three categories: Engineering (ENG), Science (SCI), and Tactical (TAC). The values for each Admiralty Ship are based on their in-world capabilities, so Escorts generally have higher TAC stats than Cruisers or Science Vessels. Higher Tier ships will have higher Stat totals.

Maintenance must be performed on every Admiralty Ship after the completion of any Assignment, regardless of outcome. The Tier of the Admiralty Ship determines the length of this Maintenance Period, with higher Tier ships requiring more time spent in Maintenance.

Progression in the Admiralty System is divided up into multiple groups of assignments, each with their own themes and rewards. These groups are referred to as Campaigns.

Players will progress through ten (10) Tiers within each Campaign, with each tier improving the quality of rewards given. Additional rewards, such as Titles and numeric bonuses, are rewarded along the way. Every Assignment offers Campaign XP as one of its intrinsic rewards, and the first Assignment completed each day offers a large Campaign XP bonus.

Each Campaign has a unique Tour of Duty. These Assignment Chains take a minimum of several days to accomplish, but offer substantial rewards upon completion. Tour of Duty progress is reset on completion, allowing players to continue earning these impressive rewards on a recurring basis.

Reaching Tier 10 in any Campaign grants players a unique Epic-quality Admiralty Ship related to the Campaign in question.

Campaigns represent major political factions within the galaxy, with your progression representing a measure of the efforts you’ve undertaken on their behalf as an acting Admiral. The following Campaigns will be available with Console Update 1.2:

While we expect all players to eventually participate in Assignments on behalf of these political powers, each specializes in a particular type of reward. This allows players to decide for themselves what they would like to pursue as their primary reward for participating in Admiralty.

Additional Campaigns will be released in the future, allowing the system to continually expand and offer new choices and challenges to Admirals.

Players will enter the Admiralty system with three (3) Assignment Slots available to them. Players can access up to eight (8) slots by progressing within their available Campaigns.

Each Campaign will offer a set of three (3) Assignments to the player, pulled from a list of several dozen possibilities. These availability lists are defined per player, and will persist through map changes, logouts, etc. Players rotate through their available Assignments either by completing the current offerings, or by using a Pass Token. Pass Tokens are primarily acquired via Critical Successes within the Admiralty System. Players can also see their Upcoming Assignments, so you can plan ahead and make your choices accordingly.

Standard Assignments vary in duration from as little as 15 minutes up to a maximum of 4 hours. These relatively low durations allow players to participate as much, or as little, as suits their playstyle. Tour of Duty Assignments always require 20 hours to complete.

Once an Assignment is chosen, the planning stage begins. Each Assignment allows for up to 3 Admiralty Ships to be slotted, though any Assignment may be started with as few as 1 ship present. The ships chosen for any Assignment should correspond to the requirements and challenges it presents. These come in two forms:

State Requirements: Divided into ENG, SCI, and TAC requirements, these are the target stats that represent a 100% chance to success on any given assignment. Any excess above the individual stat requirement will improve your chance of getting a Critical Success.

Events: These additional modifiers are randomly assigned each time an Assignment becomes available. This results in the same Assignment having different end requirements each time it is run, requiring additional care when choosing which Admiralty Ship will participate. Events have different effects, resulting in different Stat Requirements, as well as a positive component, such as improving Critical Success rates or offering additional rewards on Success.