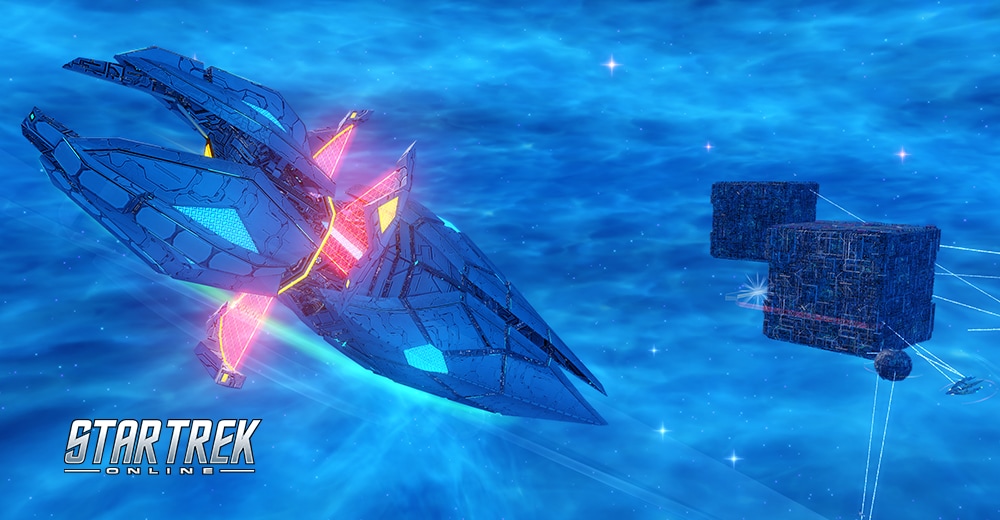 Nenid opened her eyes, only to see the worried face of Centurion D’mev staring down at her.  “Status report,” she said hoarsely, having taken in a lungful of smoke during the last exchange of fire.  Coughing, she got to her feet with the junior officer’s assistance and took a seat in the command chair.  “Preferably before the Tholians manage to find and destroy us, if you please, Centurion. “

D’mev blanched before speaking.  “Commander, we are under cloak, per your orders. A Tholian fleet is massing within the Azure Nebula; it seems we encountered their vanguard during our investigation of the temporal anomalies there.”  Nenid nodded as she called up tactical data to the main viewscreen.  And in a moment, a mission of science becomes a mission of war, she thought silently.  “Engineering,” she said as she activated her command channel.  “What’s our situation?  That volley from the Tholians nearly rattled all of my teeth out of my skull.  I hope my ship’s in better condition.”

“Damage control operations have begun,” replied the chief engineer from her chair’s personal speaker.  “I can’t speak for your dental situation, Commander, but the ship will be ready to fight in minutes, per Republic battle doctrine.  Engineering, out.”  Nenid chuckled to herself as she beckoned her young, Academy-fresh science officer. He was clearly shaken; this was his first actual experience with space combat.  Nenid silently vowed to herself that it wouldn’t be his last.

“Science officer,” she said confidently as she studied the battle data flowing into view upon the main viewscreen.  “Begin passive scans of the Tholian fleet.  I want to know their combat disposition, ship types, crew compliments – everything – and quickly.”  As the young Reman at the nearby science station began to comply with a single “Yes, Commander” in response, Nenid turned to her communications officer.  Another fledgling barely old enough to enlist, she thought.  I ask for veterans and they send me children. So be it.  Here begins the lesson.

“Comms,” Nenid said calmly, hoping to inspire some composure in the young Romulan officer.  “Prepare one of our cloaked Comm-Drones; set it for tight-beam transmission to the sector relay station.  Prime it to self-destruct after it beams the message back to Fleet Command.  Understood?”  He nodded in response as he carried out his orders.  “Commander,” he asked softly.  “What shall I have the drone transmit?”

“Everything we’re about to learn on that Tholian fleet,” Nenid replied with a confident smirk.  “That, and a very cordial invitation to the Republic Fleet and any allies that wish to join us here.”  She paused as her smirk turned into a predator’s grin.  “I’d hate to blow all of these insects back to whatever gods they hold dear by myself.”

The Tholian Red Alert will be available for a limited time to all players level 50 and up (Romulan players must have selected a faction). Players will be directed to an alert when a Tholian fleet appears in Sector space. Simply travel to the Tholian ship and select it to queue for the event and earn Romulan Marks.