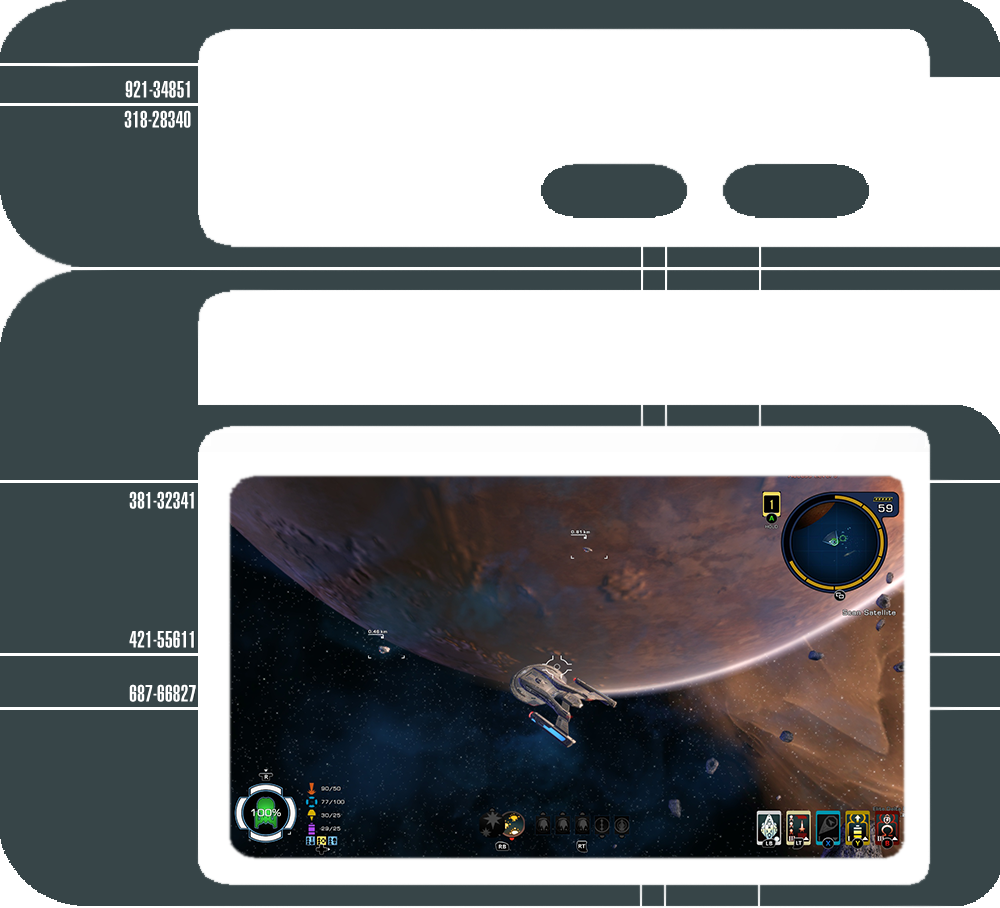 “Star Trek Online is a game that offers such a breadth and depth of tactical possibilities in its space combat that your build and engagement options are nearly limitless. All of these options make for some truly compelling gameplay, but result in a wide variety of abilities at your captain’s disposal at any one time. When we were thinking of bringing Star Trek Online to consoles, this fact was at the forefront of our minds. At first blush the general consensus was “This is impossible! We have a game that utilizes nearly an entire 72 key keyboard, how on earth are we going to get it to work on a 12 button controller!” We decided that before we would start development of this project in earnest, we would rapidly prototype control schemes until we found one that made sense. In surprisingly short order, we came across a raw layout that was simple, accessible, fun, felt good on the sticks, and still offered that classic Star Trek combat that we’re known for. With the control scheme well in hand, the game was put into full production and we began the long process of polishing and honing that raw control scheme into something far more refined. As a lifelong console player, making sure this game felt good on a controller was of paramount importance to me, and I believe we’ve achieved that with a combination of radial menus, point targeting, optional powers automation, and system streamlining.

One of our earliest wins while prototyping the control scheme for the console was to create a radial menu for handling all of your bridge officer powers, captain’s powers, console powers, and consumables. In order to make some abilities available instantly, captains will select a single power per category (Captain, Science, Engineering, Tactical, and Console) that can be quickly activated by simply tapping its home button. If you only have one power in that specific home button category, then it will automatically be set as the quick fire default. By attaching each of these distinct power groups to their own home button, and providing a radial menu for accessing them if you hold that home button, we created a quick system for accessing your considerable combat options. These options combine to give captains both easy accessibility and as much depth as they choose to engage in within the same control scheme.

As we continued to playtest, we noticed it still took a while to activate several abilities in sequence rapidly. Our next iteration allowed captains to quickly cycle around an open radial menu, using the right trigger to activate as many abilities in a row as they liked without having to close and reopen the menu. This opened up a really convenient path to a lot of high end tactical options like alpha strikes, team wide heals, effective crowd control, and buffing or debuffing en masse. Once we had this up and running, the control scheme felt very slick, and we knew we were on the right path.

We knew in order to make this game feel good with sticks we would need target selection that felt natural on a controller, but still offered the flexibility our players are used to. We came up with something that should feel new, but natural, to console players everywhere. Captains will be able to freely aim the cursor to engage any and all targets in range, but they can also toggle on a target lock by clicking on their right stick. While target-locked, the camera will keep the player and enemy ship in a combat effective view, leaving captains free to select their powers without having to touch the right stick.

In addition to the target lock toggle, we found that we needed to offer a way to quickly select between several targets without requiring people to have twitch-level reflexes. Our solution is simple and effective, just as it should be when you’re dealing with something that needs to happen in an instant. While target-locked you can simply flick right on the right thumb stick to target lock on the next closest target, or flick left on the right thumbstick to select the previous or next farthest target. This sounds really simple, but it was a revelation when we actually thought of it and finally got to get our hands on it.

Once we had ability and target selection down, we were able to dive in and play with the control scheme on some higher-level content. We noticed that while it played well and gave us easy access to all of our combat options, we still wanted to make sure we had a good balance between flying, ability selection, targeting, and assessing your tactical situation. At this phase of development, we found some people were playing the UI more than actually playing the game. To iron out this latest wrinkle we developed ability automation technology.

While we’re still refining the specific options for ability automation, we have one iteration that we’re happy to share as an example. Engineering Team, a debuff cleanse and hull heal, can be set to auto-activate when a debuff is applied to your ship or when your hull health has hit a certain health threshold. Of course cooldowns still apply, so while your ability will fire based on your predetermined settings, that could mean it isn’t available in another moment when you may need it. Some players may want pinpoint control of all of their abilities all the time, so they can choose to simply keep all of their abilities off of auto-activate and execute them all manually through the radial menus. We are leaving the decision to you on how hands-on you want to be with the timing and activation of your abilities.

By this point in the control scheme development we felt like we had a great feel for the game. Based on playtesting results, we decided to make some additional adjustments to button availability to generally streamline play. The two main adjustments from the PC version are shield redistribution and power level swapping. In this version of the game you will be able to rebalance your shield levels across all four facings by simply clicking on the left stick, but will be unable to select a single shield facing to send power to. This was a simple change, but it freed up significant controller space, and it felt great to quickly redistribute shields and keep fighting.

Power levels are now defined by maximum power to a specific sub system. Captains can easily put maximum power to weapons, shields, or auxiliary via presets by tapping right on the D-Pad. This makes it simple to pop into the best preset for the abilities that you want to fire at maximum effectiveness, and then switch right back to the preset you were in a moment before.

It’s been a long journey of discovery for the Star Trek Online team to come up with a control scheme that brings the space combat we’re famous for on a keyboard and mouse to a controller. We’ve spent a lot of time and effort to hone the controller layout from our original designs, and we have a lot of internal testing and focus testing yet to go before we can say we can say we’re 100% complete with iterating on the layout. Some specifics may be refined and adjusted between this blog posting and our release this fall based on playtesting, but I hope you’re as confident and excited as the rest of the Star Trek Online team to get a controller in your hand and join us in this new frontier.