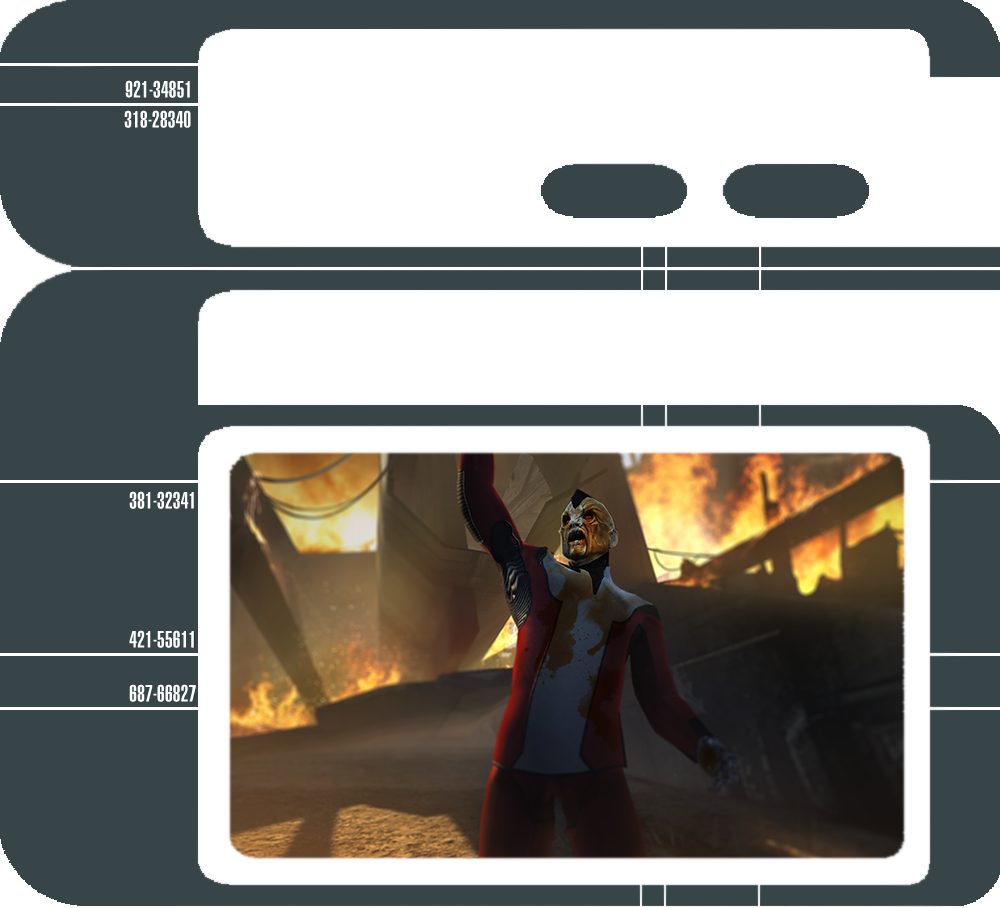 A man in combat armor peered through smoke and sparks into the wreckage as one of his comrades shined a bright light on the subject in question – a pale-skinned, hairless man in some sort of flight suit, golden blood trickling from several recent wounds.

“Some kind of new Augment, I’m thinking,” muttered another soldier as he trained his weapon on the unconscious figure. “Might be one of Singh’s new freaks. The Colonel’s gonna want to see him, in any case.”

“Looks like some kinda damn vampire or somethin’,” said the man with the light. “Whaddya call it, nosferatu? Somethin’ like that.”

“Oh, lord,” replied the other soldier with a roll of his eyes. “That ain’t Dracula, private. Now get in there and grab the damn thing before any of its buddies come along… or what’s left of its ship blows up.”

“Welcome back,” said a deep voice. “I was beginning to think you might be leaving the world, but here you are.”

The Operative managed to sit upright, his red eyes blinking as they adjusted to the bright florescent light that shined down into his cell. A tall, powerfully built human male stared at him from another cell. His eyes were nearly as dark as his full, coal-black beard.

“Yes,” the Operative said to his fellow prisoner. “Though I have no idea where here is.”

The other man smiled, revealing that some of his otherwise perfect white teeth were either missing or badly broken. “Here is where many unfortunate enemies of the state are taken to die,” he said. “Oh, but not swiftly, to be sure. Not until our hosts have learned all they can.”

“Ah,” said the Operative with a gallows-ready smile of his own. “I suppose they will employ torture, drugs, and other primitive means of coercion to seek such knowledge.”

“It is a certainty, my friend. I wish it were not so.”

“Let them try. I’ve been trained to resist methods of torture and information extraction that haven’t been invented yet.”

The human’s smile faded as he shook his head in response. “I think you will find these men possess a singular talent for inflicting pain. When they find you resistant to their methods, they may well invent one you’ve not been trained to resist. And on that day, may you find the strength you need to endure.”

The Operative contemplated this in silence for a few moments. The human may well be right; this era of history was infamous for its brutality, its savagery.

“You seem well-informed on the subject,” the operative said. “What do they call you, soldier?”

“My name is Ajai. I am a servant of the great Khan. And you are?”

“Vrell is my birth-name,” said the Operative. “I serve the glory of Na’kuhl.”

“Na’kuhl? Where is this place?” asked Ajai.

“Not on this Earth,” said Vrell with a smirk. “It orbits a star you can barely see in your skies, if at all.”

“You are not an Augment, then, nor a mutation. You are… extraterrestrial.”

Ajai laughed, a booming rumble that echoed through the cell block. “My friend, I am an Augment of the great Khan’s design. My strength, my speed, my intellect… these things are vastly superior to that of a normal man. In my grandfather’s time, such things were unheard of, and yet? Here I am – a miracle walking. So I say to you, who am I to question that a man could come here from space?”

“Who, indeed. A pity your viewpoint is not universal.”

“Truly. And this Na’kuhl, it is a place of beauty?”

“It is barren and cold, a wasteland incapable of supporting life. We live beneath its surface, huddled in artificial habitats, clinging to existence.”

Ajai nodded sadly. “You may get the chance for that sooner than you’d like.”

Vrell opened his remaining eye slowly and found himself back in his cell once more.

“The man from the stars returns,” said Ajai from his cell. “Worse for wear, sadly.”

The Na’kuhl forced himself to sit, despite the sharp pains that wracked his body, and regarded his fellow prisoner. “They took your beard. Why did they take your beard?”

“They didn’t like my answers to their latest questions,” said Ajai. “I think I might have touched a nerve in the little one… Cooley? Cooper. I can’t tell the two of them apart.”

“Cooley is the one with the growth on the end of his nose. Cooper is the dullard with one eyebrow.”

“So you say,” replied Ajai with a grin. “Then it was Cooper who took offense and relieved me of my luxurious beard. A crime I hope to avenge one day.”

“The list of crimes in need of vengeance grows quite long,” said Vrell. “I propose a joint venture on our parts when it comes to meting out this justice. Otherwise, we might fall to old age before we finish.”

Ajai blinked, and then let his booming laugh fill the air.

“Agreed! An eminently sound plan, sir. And which one of them shall we deal with first?”

“I plan on starting with Cooley. He owes me an eye.”

Ajai had not returned. Vrell began to think he was now the sole resident of the cell block. Another crime for the very long list, should that be the case.

He thought about his mission. How he’d been selected to return to this time and place to find, isolate, and eliminate the forebear of a temporal operative. How his commanders had told him that the turmoil of the Eugenics Wars would provide him with all the cover he needed to achieve his goals, and how primitive the human tech of the era was.

His ship? Invisible to these backwater mongrels! His weaponry? Superior in every way!

And yet, with the failure of his power systems after a temporal shunt gone awry, his now-quite visible (and vulnerable) ship was shot down by primitive space defense systems. After he crashed, he was taken prisoner before he could fire a single shot from his superior weapons.

Green was the architect of his pain and misery and leader of his human oppressors. He was a vicious, treacherous zealot who preached the litany of genetic purity and called for the utter destruction of the different. Vrell’s would be the last face Green would lay eyes upon, if there was any justice.

His brooding was interrupted by the arrival of two guards carrying an unconscious Ajai between them. They roughly deposited him in his cell and locked the door.

“You’re next, Dracula,” said one of the guards as they walked toward his cell door.

“Good,” Vrell sneered. “I was beginning to think you inbred thugs had forgotten about me.”

A series of explosions shook Vrell from his sleep. The fluorescents dimmed, and some grit fell from cracks in the ceiling. Across the way, Ajai had already risen and was peering out of the single window of his cell.

“Is it possible,” said Vrell as he coaxed his injured frame out of his rack. “Can there be people in the world that hate these mongrels more than we do? People with bombs and the will to use them?”

“That certainly seems to be the case,” called Ajai from his cell. “Bombs, and plenty of them.”

Almost on cue, another round of explosions shook the foundation of the prison around them. Once more, the lights flickered… and then went out. Moments later, the red emergency lights went on, and the sound of alert klaxons filled the air. Ajai turned to face Vrell with a wide smile on his scarred face.

“Get ready,” he said. “If we’re lucky, we’ll get to meet the owners of all those bombs.”

Before Vrell could reply, the sound of gunfire came from beyond the cell block’s main entrance. He heard men cry out, some in pain, some in rage, and some in fear. After a few short minutes, the sounds of pitched combat began to fade, and then there was silence.

“Wonder who won,” asked Vrell as he listened for any sign of life outside the cells.

“Hopefully someone on our side,” replied Ajai, absently stroking the stubble on his chin as he stared intently toward the main entrance.

A moment later, it was blown open by an explosion, the volume of which nearly deafened the two prisoners. Through the smoke, a number of soldiers in combat armor ran into the cell block. Vrell didn’t recognize their uniforms, but Ajai did… and it brought a smile to his face and tears to his eyes.

“Brothers!” Ajay shouted as he rushed to his cell door. “Brothers! We are here! “

“I am not your brother, Ajai,” said a low, but feminine voice. “But I will take you from this place just the same!”

“Sohana! I should have known,” said Ajai joyously. “You are my sister in blood as well as arms!”

“What about this one, Lieutenant?” another soldier asked, pointing at Vrell as he stood and watched the reunion from within his cell.

“What of it,” Sohana responded. “I’m not even certain what it is. We came here for my brother, and nothing more. Leave it.”

“Leave that man, and you shall leave without me as well, Sohana,” said Ajai, a threatening rumble in his voice. “He who we both serve will not take such news kindly. Do I make myself adamantly clear?”

“You do, brother,” replied Sohana. “Get them out of those cells. Now.”

Vrell opened his eyes – one for the first time.

“It’s the same lovely shade of red,” said a grinning Ajai. “I was quite specific with the cyberneticist about that. I trust you approve?”

Vrell laughed as he took in his surroundings. “I do… except for one small detail.”

“And what trivial matter is that?”

“I can’t read the language in the HUD.”

“But I don’t speak Punjabi, Ajai.”

“Yet! You don’t speak Punjabi yet,” said Ajai with that booming laugh Vrell had come to enjoy so well. “It’s a gap in your education I intend to fill, my starborn friend.”

“I look forward to it, then.” Vrell stood up to join his brother-in-arms. “And when will we be getting to the matter of our mutual list of grievances?”

“Ah,” smiled Ajai. “The great Khan, who we both serve, has some thoughts on that matter. I think you will find them most… agreeable.”

Vrell returned Ajai’s wide smile. “Let’s get to it, then.”