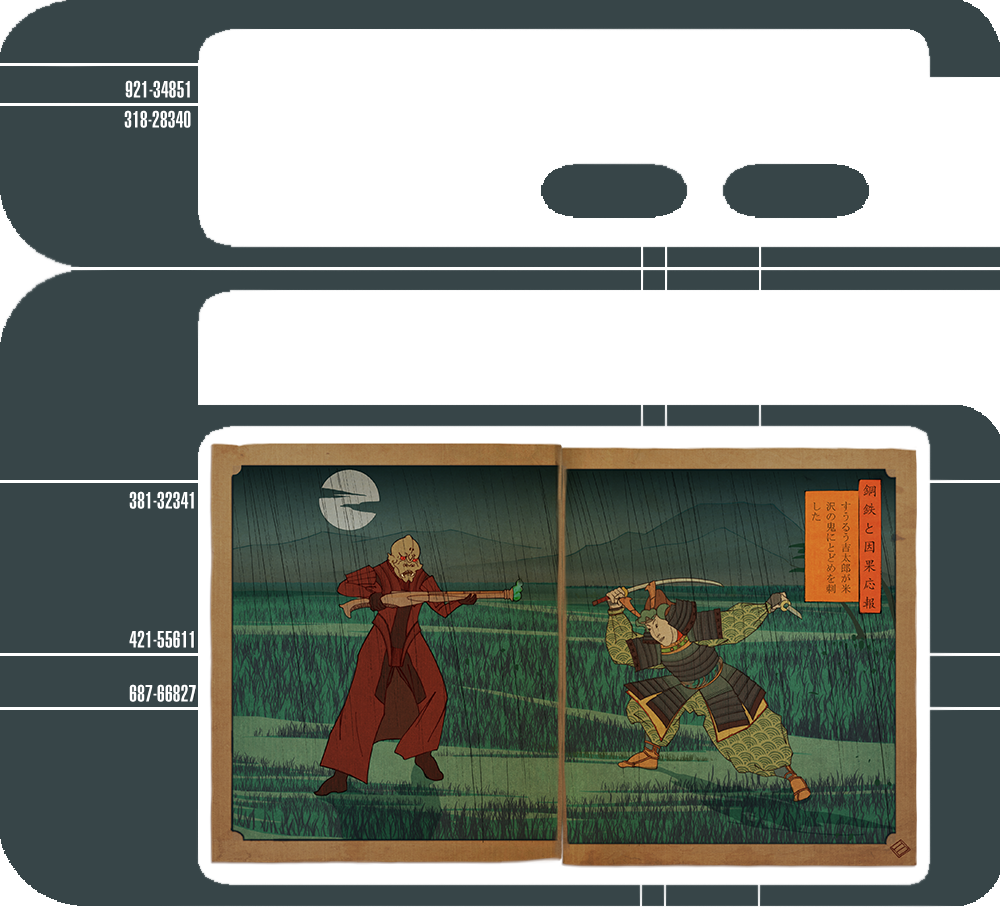 Sūrū Yoshitaro tensed his fingers around the hilt of his katana as the rain poured down on him and his two soggy compatriots. A flash of lightning illuminated his daimyo’s castle behind him. Silently, he pondered the chain of events that led him to this place; how the local peasants had been petitioning his lord, desperately claiming that an Oni had been spotted around the town. Intrigued, he had volunteered to investigate these claims, along with his closest friends, on Lord Uesugi’s behalf.

This Oni, the peasants said, came out only on rainy nights, when the clouds blocked out the moon’s light. And so, here he was, on such a miserable night.

Sūrū turned to the others. “Likely, this is but peasant superstition. Still, it is our duty to see this through. And if there is an Oni, we will put it down for Lord Uesugi, the Tokugawa Shogun, and Emperor Higashiyama.”

“Or we will die trying,” responded the ever-calm Naoe Kanemasa. “A peasant swore that he saw the creature use evil magic to immolate some rice. If this creature does exist, we must be cautious.”

“Bah!” chimed in the third, Maeda Takamaru, a beast of a man. “Let this Oni come! I fear no demons!” He belted out a laugh to emphasize his point.

Sūrū shook his head and scanned the surrounding darkness. If he were to die this night, it would not be due to his letting his guard down. His mind drifted to his pregnant wife – she was certain it was a boy. He would train his son to be a great and honorable samurai like his ancestors before him. And then he saw it, a silhouette of man-shape, but not quite right.

The figure let out a horrible sound, definitely not Japanese nor like the Christian foreigners. The three samurai moved quickly, drawing their katana and spreading out. Lighting flashed again, revealing the Oni’s face, gray and twisted, with blood-red eyes. The creature started to glow, and suddenly there were two. Maeda charged with his nodachi, a large blade for a large samurai. He swung at the demon but his blade went through its body, doing no harm.

Sūrū ran at the other figure. A green burst of magic exploded overhead as Naoe tackled him to the ground. “The Oni’s magic is real,” he observed grimly. The two leapt up to their feet to assault the monster. The Oni continued throwing blasts of energy at them, originating from a weapon that looked like a teppo arquebus, but didn’t require reloading the way the teppo did. The three samurai closed in on the demon, too close for a teppo to be effective.

The beast kicked away Maeda – it was strong, as expected for an Oni. It hit Naoe with the butt of his gun, bloodying his face and dropping him. But in that moment Sūrū took his chance slashing with all his might. The Oni stared into Sūrū’s eyes, surprise on his face to be defeated thusly, and then it fell.

Sūrū wiped the yellow Oni blood off his blade, sheathed his sword, and checked on his friends. Though their pride was wounded, both Naoe and Maeda survived the encounter. They turned back to the slain foe in time to see it fade from sight in a strange haunting light. “The beast returns to Jigoku where it belongs. Lord Uesugi will be pleased to know that Yonezawa and his people are safe once more.”

“You’re telling me that a Na’kuhl operative was taken down by an ancestor of Hikaru Sulu’s family line? Would you call that a coincidence? Or perhaps karma?”

Captain Walker didn’t know what to make of the report. It looked like the Na’kuhl were targeting a Sulu ancestor on purpose – his own recent experiences supported the theory. The Sulus had a history of serving with distinction in Starfleet; their loss would have a great impact on Federation history. Without Hikaru Sulu in command, would another captain have pushed the crew of Excelsior to reach Khitomer in time to prevent the destruction of Enterprise? How would the first tour of duty for the Enterprise-B have went without Demora Sulu at her helm? Would Earth Spacedock have survived the Iconian attack without Akira Sulu in charge?

“It’s hard to say for certain, sir.” Professor Maureana Barkley took a deliberate breath. “There are few records of the era, and as with most of these stories we are finding, they are shrouded in mythology. Whether these ancient warriors were the targets of this operative or just the ones to happen upon him, they definitely stopped the agent. We are currently looking through other records of the 17th century on Earth to see if we can find other sightings. If the operative was transported up after the battle, it is possible that he wasn’t working alone.”

“That leaves us yet another question,” Walker replied grimly. “If they had a ship with which to transport the operative, then why are there no records of its activities? Earth at that time was primitive, and had no way to defend itself against the technology of a fully operational Na’kuhl vessel. There must be more to this story.”

“I’m inclined to agree with you, Captain,” Barkley said softly. “It’s an enigma I’d like to unravel, to be certain.”

“That makes two of us,” Walker smiled. “I’m counting on you and your team to find the answers to that riddle, Professor. Thank you for your hard work. Walker out.” His screen went blank and he found himself with more questions than answers. Resigned to his fate, he contacted his first officer on the comms.

“Walker to Nereda. Clear your calendar, tonight’s going to be another long one…”