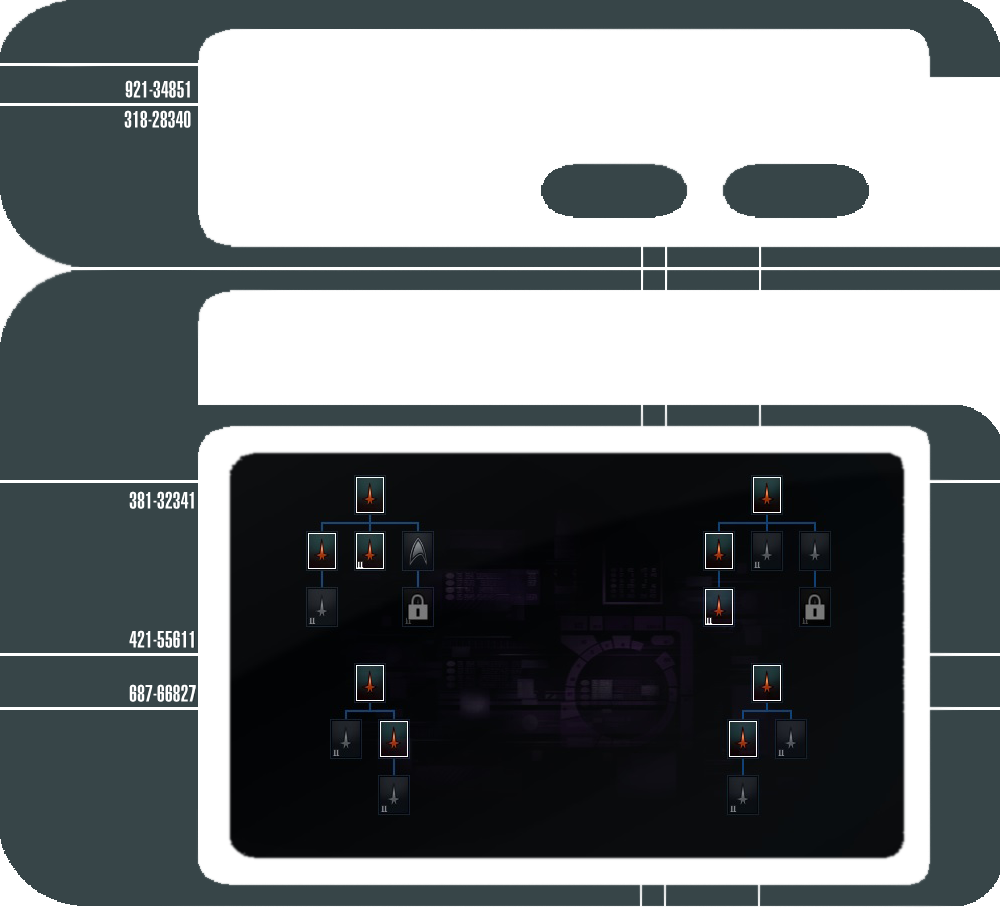 As you gain levels and ranks in Star Trek Online, you are exposed to a vast array of choices in how you progress your character, and how you choose to improve your effectiveness. The core way this is accomplished is by improving one of the many, many Skills made available to you.

For some time now, we have been looking to improve this progression system. We know that new players often have a difficult time coming to understand the many options presented, what they do, and what the “right” choice for them might be at any time. And, even more fundamentally, mechanics such as the Ground/Space point split ratio and what controls when each Tier of skills unlocks, have never been thoroughly understood or explained.

When faced with the daunting task of overhauling and improving such a core aspect of the Star Trek Online experience, it was important to carefully decide what we wanted to accomplish. What we arrived at were the following guiding principles:

With those concepts guiding the way, we have set out to create a more streamlined experience that makes gaining levels and skills more enjoyable and impactful. 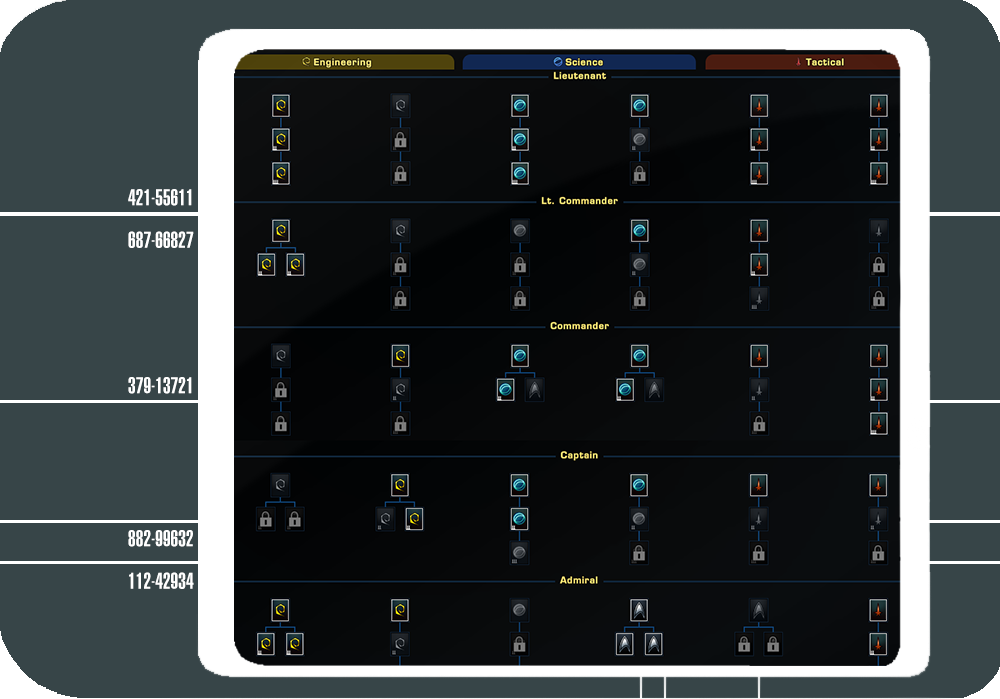 To facilitate the new process of leveling up and purchasing Skills, we started with simplifying some core concepts of the game.

First, we are eliminating the idea of “Skill Points” as the numeric you earn from completing actions. In its place, the standard RPG numeric of “Experience Points” will now be given out. This change makes it more obvious that what you’re earning is attributed to increasing your Level, and not your Skills.

While the current system includes 405 different skill ranks that can be purchased (315 Space, 90 Ground) for costs that vary from 1,000 to 3,000 Skill Points each, every single one of the 110 ranks (90 Space, 20 Ground) that exist under the new system cost either 1 Space Point or 1 Ground Point to purchase, with entirely separate Skill Trees and costs based on region. No more feeling as though you’re forced to sacrifice performance in your Starship for the sake of Ground Skills, or vice versa!

Passive Progression in your Space Skills is tracked by a series of Unlock tracks, separated by skill category (Engineering, Science, or Tactical), offering additional passive benefits based on the number of points spent within that category. For example, Active Progression via the purchase of a skill under the Science Category will apply Passive Progression to the Science Unlock Track.

If a player invests at least 24 of their Space Points into a single profession-themed category of Skills (Engineering, Science, or Tactical) they will unlock a new “Ultimate” ability. These powerful new options offer additional tactical choices during combat situations, without overriding or replacing your existing suite of abilities, and are presented as additional incentive for those players interested in spending deeply in a single thematic category of Skills.

Ground Skills don’t have separate profession-themed categories, and instead present only a single Unlock Track. However, each Unlock presents a choice between two options, allowing every Captain to progress in their own way as they gain levels.

Lost, But Not Forgotten

But, if 405 skill ranks are becoming 110, doesn't that mean something is being lost? Well, I’m glad I asked.

We had a difficult time arranging a new Skill Tree that would eliminate sub-optimal choices, re-balance the skills offered by all 3 different profession categories, and still keep all options available to players. In the end, the answer ended up being a combination of Skill/Mechanic Consolidation and moving some Skills into the Unlock paths, rather than having them cost Space Points or Ground Points to purchase.

A list of Skills that were turned into Unlocks includes:

The most notable example of old Skills that received a consolidation come into play in the Science category, with the creation of two new Skills:  Drain Expertise and Control Expertise

Drain Expertise combines the mechanical benefits of what used to be Flow Capacitors, Power Insulators and Subsystem Repair. In other words, this single Skill now oversees both the offensive potential, and the player’s resistances to, all Shield Drains, Energy Drains, and Subsystem Offline effects. A potent combination!

Control Expertise plays a similar new role, combining the previous mechanical effects of Graviton Generators, Countermeasures, Subspace Decompiler, Inertial Dampers and Sensors. With investment into a single Skill, players can become a Control powerhouse. Ignore the Skill at your own peril, lest you remain vulnerable to these same effects!

Ground Combat has also received a significant streamlining through the introduction of a powerful new consolidation of existing skills: Kit Performance

The new skill behaves the same as the old ones did, except that you no longer have to make the choice between improving the duration of your Weapons Malfunction debuff vs. the amount of Shields your Phaser Turret has, or the damage of your Chroniton Mines.

One profession-specific skill missing from the above lists is Combat Specialist, which is getting a slightly different treatment. It will be granted automatically to all characters (not just Tacticals), but no longer improves critical hits and melee-themed kit abilities.

Other consolidated Skills exist, such as combining both existing “Weapon Specialization” skills into superior choices that improve both Energy and Kinetic weapons, rather than encouraging players to ignore one or the other.

In the end, the list of Skills that ended up on the cutting room floor is extremely short:

With all of this consolidation occurring, there must be empty places in this new Skill Tree that require filling in, right? Of course you’re right!

New options are being introduced that will allow players to invest in Skills that will increase Shield Hardness, Hull and Shield Regeneration, Armor and Shield Penetration, or provide cooldown reductions for certain Bridge Officer Abilities.

We are also introducing entirely new mechanics as options players can purchase from their Skill Tree:

With these new options spread across all Engineering, Science and Tactical sections of the Space Skill Tree, we anticipate players feeling many compelling reasons to step outside of their usual comfort zone and perhaps even exploring new ways of progressing their captain and starship.

We are extremely excited about the changes we’ve made to leveling up and earning skills by overhauling this core feature. With strong guiding design principles and a thorough understanding of how our players interact with the existing system, we believe that progressing your character is going to become a far more enjoyable and interesting experience for all of our existing players, as well as removing a significant barrier to entry that previously existed for new players.

Obviously, with such an enormous amount of change happening simultaneously, it would be hard to imagine that everything involved is seen as perfect by everyone, or meets everyone’s needs and expectations. So get your feedback heard early! We will do our best to answer further questions as they arise within the community, and provide more detailed explanations of any mechanical changes, in an effort to keep everyone well-informed and excited about this revamp.

We’re also going to be keeping a very close watch on feedback from our Tribble Test Server over the coming weeks, while this new system undergoes its final tuning and tweaking. We greatly encourage all existing players to try out the changes, both with new and existing characters, and offer whatever feedback you can before the new Skill System becomes a permanent part of the Star Trek Online experience with the launch of Season 11.5 later this Spring!