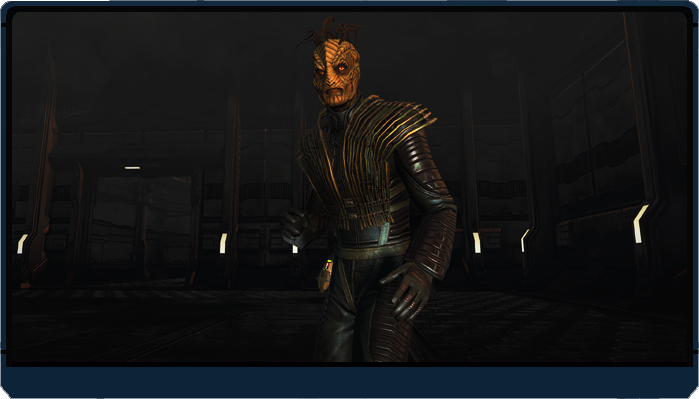 The five allied species that make up the Xindi are among the most reclusive members of the Federation. All of the Xindi developed on the same planet in the Delphic Expanse, but were rivals throughout much of their history.  They united under one government after a brutal war led to the extinction of the Xindi-Avians and the destruction of the Xindi homeworld. Even then, each species continued to jockey for dominance.

In the mid-22nd century, the Xindi heeded the call of their "Guardians" to preemptively attack Humanity, the race that the guardians said would be the end of the Xindi. Although millions were killed when the Xindi attacked Earth, the plan ultimately failed, and the guardians were exposed as transdimensional beings attempting to reconfigure space through the construction of several spheres in the Delphic Expanse.

After the Xindi rejected the Sphere Builders, they chose to retreat from galactic society, devoting much of their resources to restoring the Delphic Expanse. The discovery of the Dyson spheres in the Delta Quadrant, and their connection to the Iconians, has prompted the Xindi to come out of their self-imposed exile.

The Xindi species was introduced during the third season of Star Trek: Enterprise, presenting the crew with the unique challenge of dealing with a foe that was at times at odds with even itself. In stark contrast to enemies such as The Borg or Species 8472, the Xindi asked fans of Star Trek to explore the shades of grey that lie between good and evil.

Within the timeline of Star Trek Online, the Xindi species joined the United Federation of Planets long ago. Even then, they preferred to remain isolated within the Delphic Expanse.  The Xindi’s tumultuous past as puppets of a powerful extra-dimensional force gives them a historical context for the type of danger the Iconian threat represents. They have not forgotten how the Sphere Builders manipulated their species and they will not allow other species to fall prey to such deception again.

In the context of Star Trek Online, we are portraying the Xindi species as a highly intelligent and experimental species, still capable of fantastic feats of science and engineering such as those that led to the creation of their infamous “Super Weapon” in the 22nd century. By opening a Xindi Lock Box, players will find the opportunity to benefit from the experimental technology of the ingenious Xindi. Their affinity for Research and Development also goes well with the release of our newly-revamped R&D System.

The grand prize of the Xindi Lock Box will be the Xindi-Aquatic Narcine Dreadnought Carrier. Although the exterior of this elegant warship hasn’t changed much since it was first encountered by the NX-01, Xindi engineers have updated its internal systems on a regular basis. The addition of two full-sized hangar bays and two contingents of Mobulai Frigate pets only serve to further augment its already considerable arsenal.

Narcine Dreadnought Carriers are equipped with a Console - Universal – Cascade Resonance Catalyst. The emissions caused by activating this console will resonate with the hull and shields of all nearby vessels, causing additional ripples of energy to continue spreading throughout the nearby region. Allies are immune to any detrimental effects caused by the cascade, but foes will find themselves suffering periodic kinetic damage, along with reduced damage resistance. These effects can stack, if bounced off multiple nearby starships.

In stark contrast to this elegant brute, is the Xindi-Reptilian Contortrix Escort – a nimble offensive starship built for hit-and-run tactics, and precision strikes. This vessel will become available on the Lobi Crystal Store with the launch of the Xindi Lock Box.

Contortrix Escorts are equipped with a Console - Universal – Xindi Weapon Platform. This console is capable of replicating a powerful mobile weapons platform that is reminiscent of the infamous “Super Weapon” launched against Earth in the conflicts of the 22nd Century. This sturdy combat construct will fire a strong blast of Phased Biomatter energy at the target of its owner every couple of seconds.

Equipping both the Cascade Resonance Catalyst and the Xindi Weapon Platform consoles further enhances the weapon platforms that can be constructed by doubling their Hull and Shield Capacity, while also offering a small increase to the damage output of their Beam weapon.

The Xindi Lock Box will re-introduce the idea of the Cross-Faction Console, but with an added twist – in addition to offering a few of the last remaining consoles to players of the opposite faction, we are for the first time including Romulan Warbird consoles into the mix, and offering players a choice of which item they will receive with each time they open this pack:

Much the same as the previous Lock Box, we are continuing the new standard of offering updated Mirror Universe Starships that have never before been released! Three entirely new Mirror Universe variants can be obtained as prizes from this pack, featuring material and seating options that were not previously available for their respective factions:

We are also continuing the trend of offering new and unique gameplay-altering Traits in our Lock Boxes, through the use of Genetic Resequencer Packs. Six (6) new Traits will be made available. Each of these offers a “build-up” mechanic; growing more and more powerful the longer the player remains in Combat / Red Alert, and vanishing as soon as combat ends.

Xindi Experimental Kit Frames focus on the Expose/Exploit ground combat mechanic, allowing you to benefit from either an increased chance to Expose, increased Expose duration, or increased Exploit damage. Every one of these kit frames will have one of these new unique modifiers, in addition to the standard assortment of skill modifiers available on existing Kit Frames.

To complement these new Kit Frames, Xindi Experimental Kit Modules offer the latest in combat readiness and defensive countermeasures. Players will receive a Kit Module appropriate to their profession and level, from the following new abilities:

The last of the experimental offerings from the Xindi weapon labs, comes in the form of Phased Biomatter Weaponry. This specialized form of phaser energy is powered by a biological power cell, giving it unique coloring and properties. The energy beam has a chance to lose cohesion when it impacts its target, sending a shower of harmful phaser energy over the surrounding area, potentially damaging other nearby foes.

To coincide with the release of the new R&D System, we are adding Catalysts to the Boost options typically contained within all Lock Boxes. Players will be able to receive a 5-Pack of +25 Skill Catalysts, or an 8-Pack of +10 Skill Catalysts, both used in R&D to assist in crafting high-end items.

The Fleet Support Duty Officer Cadre will appear for the first time in a Lock Box as a full-size duty officer pack – the exact same as previously retired from the C-Store, including the full range of potential secondary prizes (commodities, consoles, etc). A Fleet Support Duty Officer Mini-Pack can also be received when opening any Xindi Lock Box.

Every Lock Box includes a guaranteed minimum of four (4) Lobi Crystals, with a chance to jackpot up to fifty Lobi Crystals, in addition to any of the prizes listed above (except the Contortrix Escort, which must be purchased using Lobi). The Xindi Council has decided to work alongside the Lobi Crystal Consortium to offer a few additional items to anyone willing to pay the price.

Players may requisition a Xindi-Reptilian Tactical Bridge Officer to join their crew. Cultural traditions among the Xindi have established an expectation, for better or worse, that the Reptilian subspecies is intended to bear the responsibility of military defense of the Xindi territories. As a result, most Xindi-Reptilians are raised to be fierce warriors and dedicated defenders of the Xindi people. The Xindi-Reptilians have earned a reputation for their cunning tactics and vicious tenacity in the face of conflict.

In addition to this officer’s outstanding combat performance, they are also fully customizable – capable of wearing any uniforms applicable to your faction. As an additional bonus, adding this officer to your roster will also unlock the Xindi-Reptilian Soldier Outfit for use on your captain and crew.

If combat uniforms aren’t really your style, you can also obtain the Xindi-Reptilian Robes as a Costume Unlock from the Lobi Store. This formal attire is an accurate recreation of the robes typically seen worn by Reptilian representatives on the Xindi Council.

The experimental Xindi technology contained in the latest Lock Box and the additions to the Lobi Crystal Store will provide a staggering addition to any Captain’s personal holdings both in increased starship power, as well as ground combat abilities. The reclusive culture of the Xindi will no longer impede the flow of information and shared tech with Starfleet, the Klingon Empire and the citizens of the Romulan Republic. We welcome their increased presence in the defense of our commonly shared quadrants, and look forward to further collaboration with a truly unique member of the Federation.

The Xindi Lock Box, as well as these thematic additions to the Lobi Crystal Store, will become available starting July 17th, 2014, at approximately 10:00am PDT.

Discuss in the Forums