Hello all!  I’m the Systems Designer known as AdjudicatorHawk, and I’m here again today to talk to you about more details regarding the upcoming “Crafting Revamp”, also known as the Research & Development system.  In previous blogs, we’ve talked about changes to gathering materials and outlined the basic, top-level design of the R&D system.  Today, I’m going to give you details on some unique new items, traits, and powers that can only be accessed via crafting.

First, let’s talk about unique items.  At launch, each R&D school will contain one unique item that can only be made by captains who reach Level 15 in that school.  These items are Very Rare (Purple) quality on a normal success, and Ultra Rare (Ultraviolet) quality on a critical success.  Here are the items that can be made, and which school they fall into: 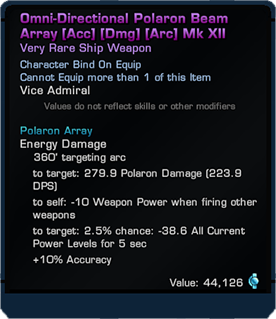 This Beam Array has been modified to fire in a 360 degree arc.  While it gives up a modicum of hitting power for this modification, its ability to hit any target drastically increases its uptime on targets and thus its DPS. 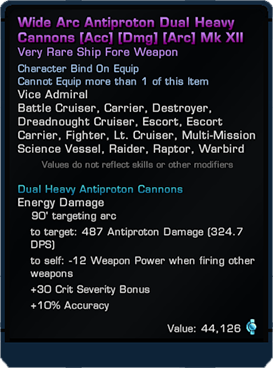 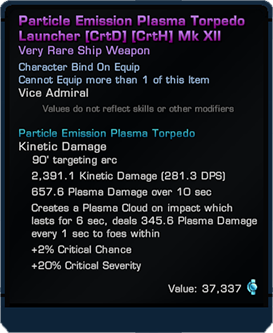 This Plasma Torpedo Launcher has been modified to create a field of Plasma on impact with its target.  This cloud slows any targets struck and deals damage in a sphere of 1k diameter, allowing it to be used both as a form of crowd control and as an extra boost to damage. 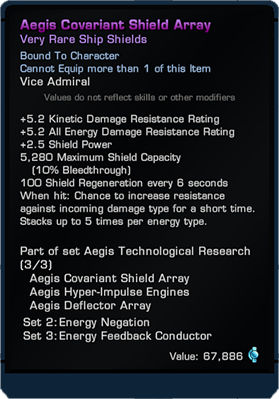 The Aegis Set as a whole has been improved, and for the Shield school, this means the improved Aegis Shield can now be crafted.  The shield provides resistance to Kinetic and All Energy, along with 2.5 Shield Power.  The previous 3 piece bonus of the set is now baseline in the Aegis Shield -- each attack against the shield has a chance to increase the user’s resistance to that damage type, stacking up to 5 times.  Most importantly, the Aegis Shield is now a Mk XII item, meaning its Shield Hitpoints have been drastically increased. 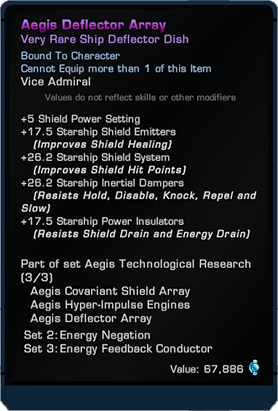 The Aegis Set as a whole has been improved, and for the Science school, this means the improved Aegis Deflector can now be crafted.  The Aegis Deflector now provides a direct boost of 5 Shield Power, as well as augmenting stats affecting Shield Healing, Shield Hit Points, Control Resistance, and Drain Resistance.  All told, it makes for a potent defensive offering in the Deflector slot. 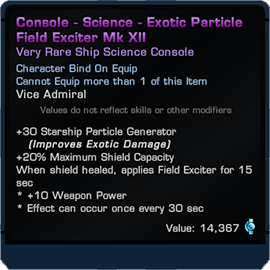 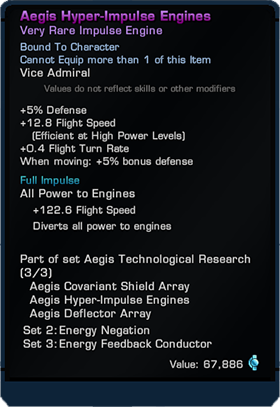 The Aegis Set as a whole has been improved, and for the Engineering school, this means the improved Aegis Engines can now be crafted.  The Aegis Engines now provide a defense boost at all times, and double that defense boost while the user is moving.  They also provide bonus flight speed while power levels are high. 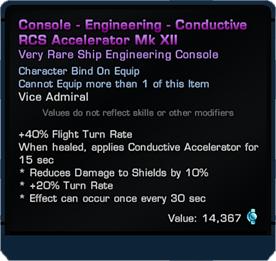 This console provides a passive increase to your turn rate equal to a standard RCS Accelerator.  When the user of the console receives a Hull Heal, he or she gains an additional boost to Turn Rate and Shield Hardness, allowing them to elude subsequent attacks. 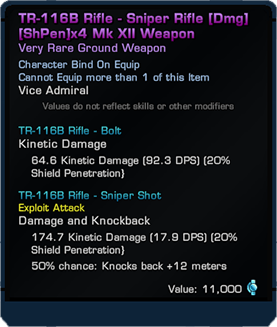 This TR-116B sniper rifle has a secondary fire mode that shoots a transported bolt at a single target dealing high damage with a good chance to knockback.  The upgrades made to this weapon cause it to deal more damage and penetrate 20% of the target’s shields, but as a trade-off, this iteration of the TR-116 model requires line of sight to hit its target.

Secondly, let’s talk about Traits!  After your crew has spent countless hours studying the inner workings of their technology, they emerge with a greater knowledge of how it works in combat.  This is represented by Trait unlocks at Level 15 of each school.  Keep in mind that all of this is on our Tribble Test Server right now and is subject to change, but presently, here is how the R&D Traits work:

Finally, there are some unique item modifiers, or “mods”, that can only be found on items created by the R&D system.  These item modifiers have a chance to appear on any crafted item of Blue quality or higher.  Here are some example mods for various types of item – as with the traits, all of these are subject to change pending testing on Tribble:

So, there you have it!  The Research and Development system is currently available to test on the Tribble test server, and is part of our Season 9.5 Update.  I hope you’ve enjoyed this sneak peak at the details of the system, and I encourage anyone who’s interested to log in to Tribble and post feedback on the system to the forums.

Thanks, and see you around the galaxy!