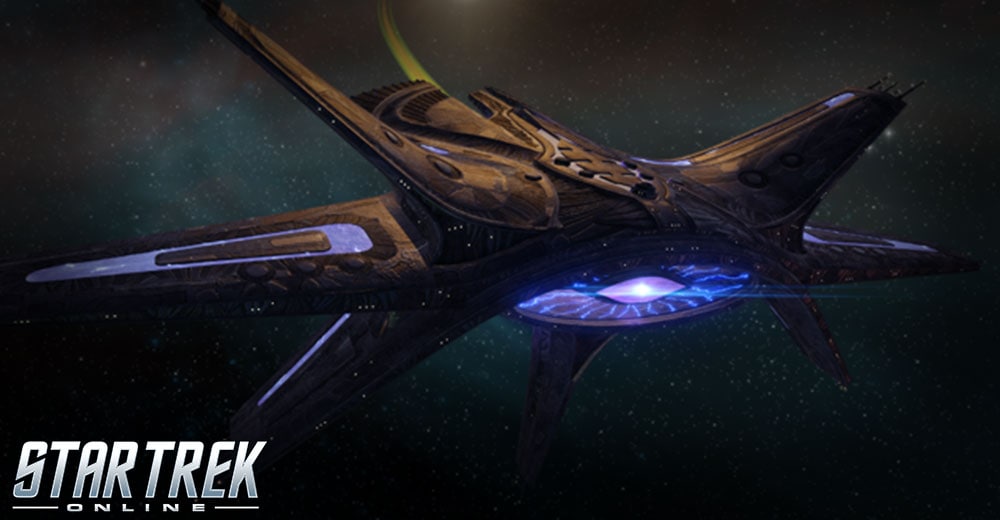 Star Trek Online’s 13th Anniversary celebration will soon be upon us! This year’s Grand Prize for participating in the Event will be a truly alien starship – the Compiler Science Dreadnought [T6]!

This fantastic starship is visually inspired by a mix between the visuals of the V’Ger Entity as seen in Star Trek: The Motion Picture (as well as concept art from the same), along with a portion of custom designs created in Star Trek Online for fleshing out the technology and enemies associated with “The Other” as seen in the current story arc.

Earning the ship will require completing the daily activities available as part of the Anniversary Event and gathering enough Daily Progress to fulfill the Event’s overall quota. Players may participate in any of the available Summer activities to earn their Daily Progress once per day, per account.

Once you have earned sufficient Daily Progress, you may claim this Starship for your entire account. Just open the Event Reclaim Store to claim a Compiler Science Dreadnought (T6) for each captain on your account.

Originally fabricated to serve as remote processors for the entity known as "The Other," these incomparable vessels have been reconstructed by the V'Ger Entity as means to aid in the safekeeping of our known galaxy. These inscrutable entities went to great lengths to provide starships that simple corporeal lifeforms can operate in a similar manner to other modern starships, but with a few additional strange pieces of technology built into their subsystems. It is unknown if we have unlocked their full potential, or if there is more to learn from their entirely alien design.

Digital transformation is not too dissimilar from transporter technology, but on a scale of refinement beyond modern imaginings. This process is capable of reading and digitally storing absolutely anything imaginable, including the subconscious thought processes of intelligent biological and non-biological lifeforms, then recreating them in perfect detail. This particular adaptation of the technology serves as a weapon in starship combat, by completely digitizing your starship and crew into volatile energy which may be used to harm enemies, before rebuilding all transformed matter exactly as it previously was.

As a gift from V'ger and Ilia, this technology is capable of being installed in all modern starships.

This console may be equipped in any console slot, on any starship. You may only have one of these consoles equipped at a time.

Toggle, Lasts up to 20 sec or until Deactivated

Whenever an enemy of Frigate rank or higher is defeated after receiving Exotic Damage from you, they will be transformed into a Digitizer Probe which will chase nearby enemies, dealing Plasma Damage to any that they are near.

You may have up to 5 Digitizer Probes active at a time from this Trait. Enemies digitized by this Trait will not Warp Core Breach.

These automated drones are large enough to be considered “Frigates” by many modern starship standards, and thus only support at maximum of two being deployed, per wing.

Digital Construct Drone Hangar Pets are unlocked by owning the Compiler Science Dreadnought and may be equipped on it as well as any ship with 2 Hangar Bays.