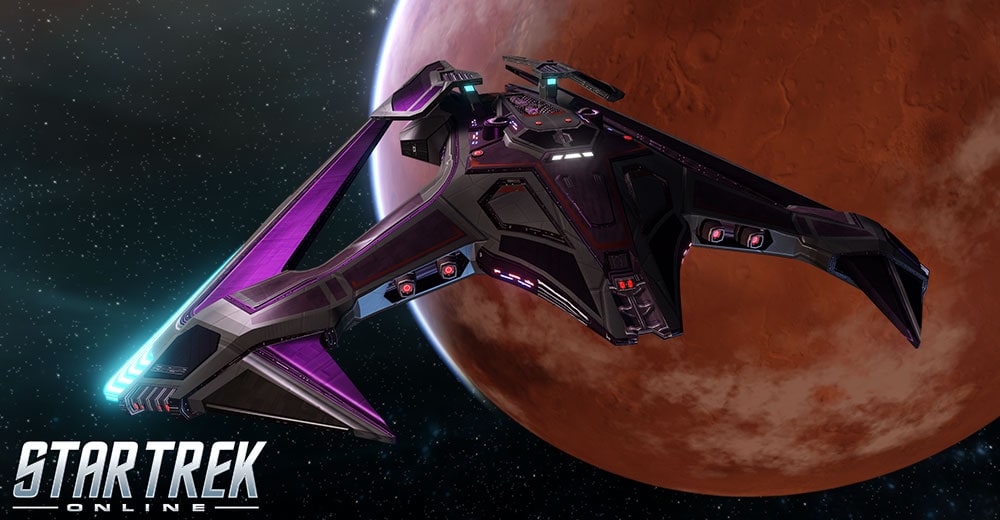 Soldiers of the Dominion are bred for battle, and prepared to face the hardships of a violent galaxy before they have even been gifted their first vial of Ketracel-white. Yet even with some focused breeding and training, there remains room for improvement.

Coming very soon, captains interested in the Dominion experience will be able to bypass a portion of that further progress by instantly boosting one Jem’Hadar soldier directly to level 65, and gaining special equipment and benefits unique to their experience, by way of obtaining the Legendary Dominion Captain Bundle.

This immense bundle will be available for the price of 9,000 Zen, with a special introductory offer of 50% OFF for a limited time, until 4/28 at 10am PT! This bundle will release on 4/14 on PC and is scheduled to appear shortly thereafter on Console platforms.

We acknowledge that there is a difference in the relative value of elevating a Jem’Hadar character to 65, due to their already accelerated starting experience. The pricing of this bundle, and what types of additional items are included (and which are not) compared to other factions’ Legendary Boosts have been adjusted to reflect this.

Provided these restrictions are met, the process is as simple as claiming the Special Item unlocked by your purchase of the Bundle, and applying it to the character of your choosing. This will immediately elevate that captain to their highest available rank, and place an Equipment Bundle into their inventory.

Ready to Serve the Founders!

After being boosted to max rank, your newly-elevated Dominion captain will find themselves in possession of an equipment pack begging to be opened. This bundle-within-a-bundle represents an incredible value of high quality gear and other resources, ready to put you on the path to immediately enjoying what life at Max Level has to offer!

Let your Honored First defend the Dominion in style in a never-before-released Legendary Starship, and unlock access to this incredible starship for all characters on your account. This modern update to the classic Dominion design has finally joined the ranks of the Vanguard, and aims to take its rightful place as the pinnacle of its family of agile and fierce attack ships.

Like other Legendary Starships, this vessel is meant to represent the pinnacle of an entire line of vessels. It will include – in a single starship – all of the Consoles, Starship Traits, and Costumes, from the entire line of Jem’Hadar Attack Ships. This includes:

This ship also has a small added bonus of being added to a very short list of ships that unlock a player’s ability to obtain “Jem’Hadar Attack Ship” and “Jem’Hadar Vanguard Gunboats” hangar pets, provided the player also owns a Jem’Hadar ship with a hangar bay.

Purchase of this Bundle will unlock the ability for all characters on your account to claim and fly this versatile cruiser, and will be the first Vanguard starship to be released without a Faction restriction.

Since the days of first contact with the Dominion, and throughout the course of multiple conflicts that led eventually to the Dominion War, the formidable Jem'Hadar Attack Ship has earned its reputation as a challenger whose capabilities outmatch its relatively small size. Their adversaries have learned to never underestimate what feats a trained crew of Jem'Hadar can accomplish from the bridge of one of these graceful and deadly starships.

The Legendary Jem'Hadar Vanguard Pilot Attack Ship comes with the following features from previous ships within its lineage:

Upon reaching level 5 in this starship's mastery, you will unlock the "Go For The Kill" Starship Trait. This trait can be found on a previous version of this starship.

Upon reaching level 6 in this starship's mastery, you will unlock the "Vanguard Specialists" Starship Trait for all characters on your account! While this Trait is slotted, all of the following Specialist Bridge Officer Abilities will have their recharge times reduced by 33% of their base recharge time: Surgical Strikes (Intel), Suppression Barrage (Command), Reroute Reserves to Weapons (Pilot), Recursive Shearing (Temporal Operative), Exceed Rated Limits (Miracle Worker)

While this Trait is slotted, all of the following Specialist Bridge Officer Abilities that provide Weapon Modification Abilities will have their recharge times reduced by 33% of their base recharge time:

Dominion weaponry has always had a knack for undermining and manipulating the protective energies used by starships, and this experimental armament is no exception. By exciting a localized tachyon resonance, the targeted foe's shields will quickly drain over time. The resulting energy cascade will also interfere with the subsystem components of the enemy vessel, causing electrical damage and occasional subsystem failures.

The Dominion has taken a page from the Federation’s playbook after their experiences during the Dominion War, and developed an analog to the super-charged weaponry found on one of their most noteworthy adversaries from that dark time. These special weapons hit harder than standard Dual Heavy Cannons, but drain Engine Subsystem Power when firing (alongside their Weapon Power drain). They also have the standard Polaron energy proc.

Jump-start your career as an Honored First of the Dominion!