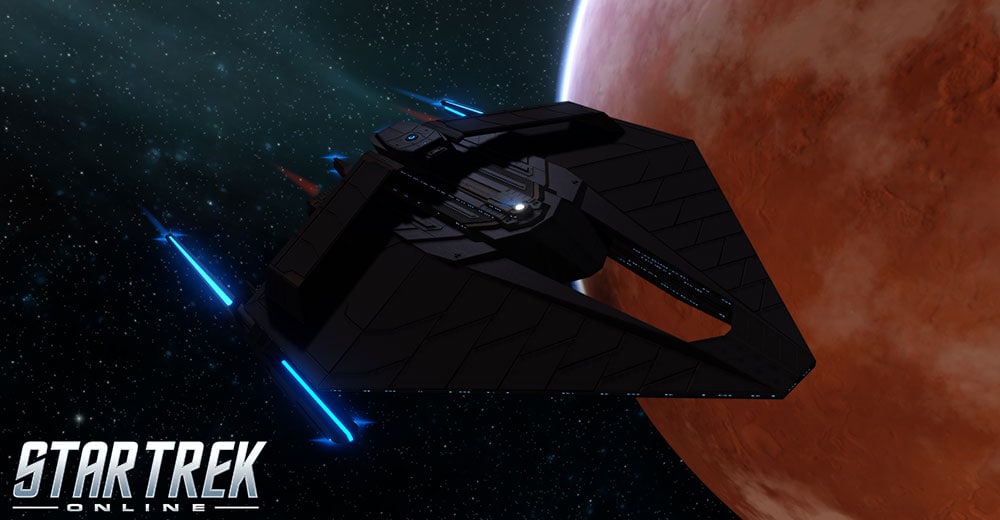 Emerging from the shadows comes the next top-secret vessel of the secretive organization founded to defend the Federation at any costs, by any means – the Section 31 Intel Dreadnought Cruiser!

From March 17th until April 7th on PC, we will be running a promotion that will provide an additional bonus when opening newly-purchased Research and Development Packs, or Duty Officer Packs.

We are excited to announce a brand new addition to the impressive list of Tier 6 Starships that are included in this Promotional Ship Pack: the Section 31 Intel Dreadnought Cruiser (T6)!

Deep beneath the altruism and honor of the United Federation of Planets, a darker underbelly may be found, and those who believe in the old saying that the "ends justify the means" may find like minds within the ranks of the secretive Section 31. Although their clandestine nature may run counter to the concept of fielding large flagships, the needs of this organization occasionally necessitate a strong arm to enforce their drastic measures.

Leave it to Section 31 to create a torpedo designed to not explode. These projectiles burrow into enemy hulls with the primary purpose of then injecting streams of nano-scale drones into the subsystems and wiring of an enemy vessel, causing chaos and confusion in an attempt to undermine an enemy's effectiveness on the battlefield. The initial impact of these projectiles is powerful enough to breach most hulls, dealing Kinetic Damage in the process.  Then the nanobots go to work, overloading subsystems to cause Electrical Damage over time, and rendering the afflicted starship incapable of distinguishing Friend from Foe.

This console also provides a passive boost to Starship Stealth and Auxiliary Power, as well as providing bonuses to Maneuverability while under any Cloaking effect.

** Control Expertise skill extends the duration of Confuse, and the linked Electrical Damage-over-Time.

Your ship's hangars are outfitted with fleets of tiny drones, designed to interfere with incoming fire, and distract enemy targeting sensors. While this trait is slotted, launching Hangar Pets will grant your ship Temporary Hit Points. This will trigger upon activating your Launch ability, even if no new hangar pets are created.

Additionally, while you have Temporary Hit Points from any source, all of your summoned pets (hangar, consoles, devices, etc.) deal increased damage. This bonus will be checked once per second, and only affects your pets if they are within 20km of you.

Dark Mode grants stealth to your starship, but lowers your shields while active. This special variant of standard Dark Mode can be activated while in combat.

When activated, your shields will drop for a few seconds before the Dark Mode fully engages.

The strength of the stealth effect is determined by your starship's auxiliary power setting.

When activated, hundreds of fighter vessels will pour out of your ship, and fire on anything hostile that approaches you. A number of these drones will frequently peel off from the main swarm to attack any larger vessels that approach you.

(As seen previously on the Section 31 Command Heavy Battlecruiser) 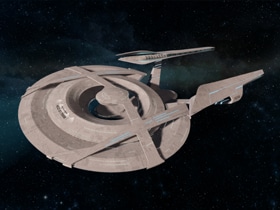 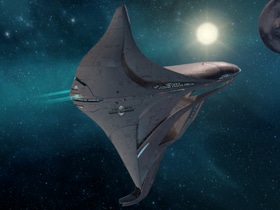 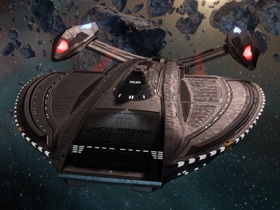