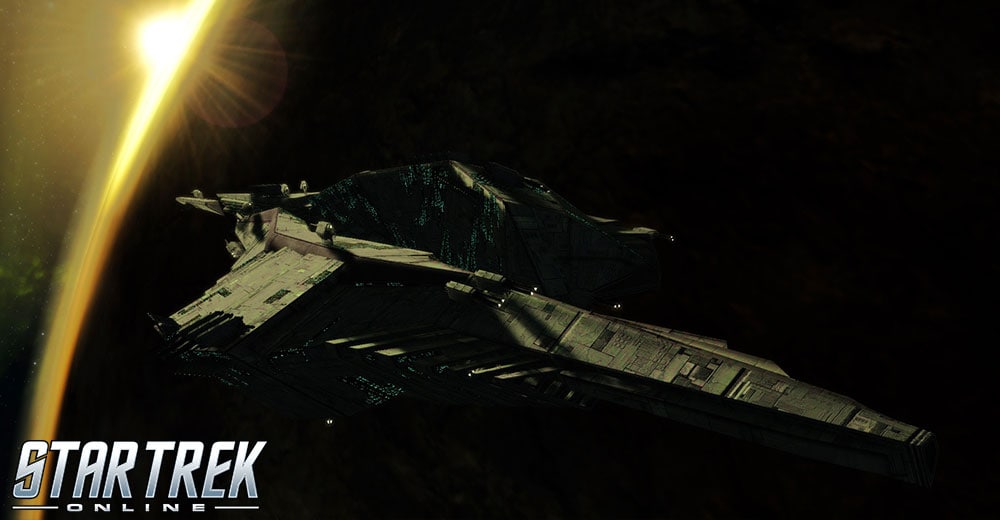 With the release of the Emerald Chain Lock Box alongside Star Trek Online’s 12th Anniversary Event, the flagship of a deadly new enemy will soon be available for players to pilot as their own. This mighty vessel looms over all who would dare approach it from a position of authority and malice.

Implementing such an enormous starship in Star Trek Online was not without significant technical challenges. In addition to necessitating a re-scale (our version is much smaller than the “canon” reference), we have developed special technology that allows the many cannon emplacements lining this vessel’s hull to track your primary target. We are very excited to see these new developments in-action, and proud of the work we were able to accomplish to bring this new feature to our players.

To say that this vessel was designed is likely an overstatement, and it is more likely a cobbled-together collection of various ships, ship parts, and technologies from any culture unfortunate to find itself under the lash of the Emerald Chain. The gargantuan size of the vessel is clearly intended to intimidate others, as are its many obvious weapon mounts. Although primarily designed to subdue and conquer, this vessel is also no stranger to subterfuge, as sometimes a lighter touch is necessary to undermine your enemies' capabilities, regardless of how much firepower you bring to bear.

While serving aboard the Viridian, the brilliant scientist Aurellio devised a plan to vent a cloud of programmable matter into a charged particle stream emitted by the deflector. This pushed the matter outwards and cohered it into an immobilizing blob, solving the crisis of the moment and planting the first seeds of the powerful tentacles encountered later by the crew of the U.S.S. Discovery.

This console additionally provides a passive bonus to Cannon Damage and Exotic Particle Generation. This console may be equipped on any ship in any console slot.

Starship Trait – Lash of the Chain

While this trait is slotted, using Cannon: Rapid Fire or Cannon: Scatter Volley negates the shared 15 second cooldown time of those abilities. This effect can occur once every 45 seconds.

After a short charge up time, this built-in weapon fires a massive blast of Plasma Energy directly in front of your starship, disabling and massively damaging anything that survives contact.