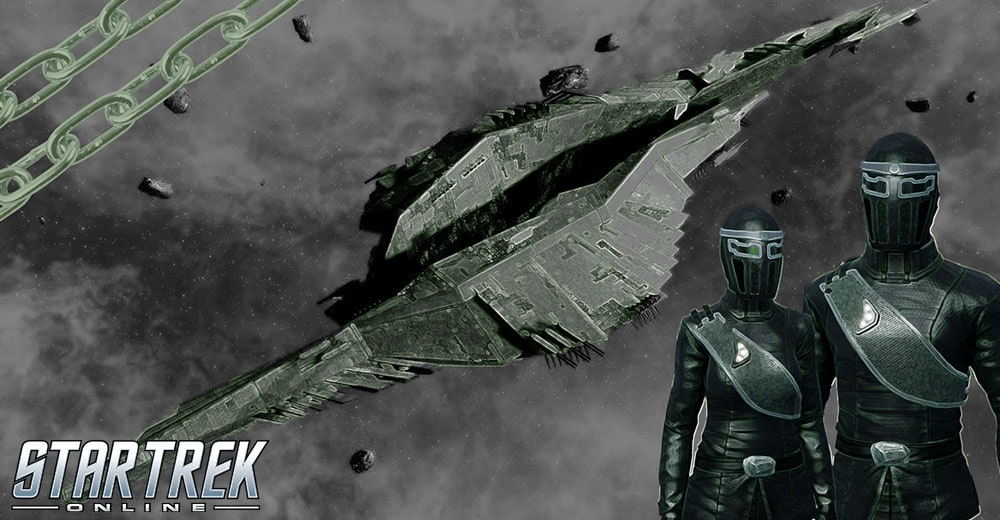 The pursuit of profit is ruthless. It rewards success, not scruples. In this way, it is the accretion of power; a completely unregulated market is the tumbling cloud of asteroids that will one day become an autocracy. In this way, the Emerald Chain is the glowing ball of magma at the middle – not quite formed into a true state, certainly not free, but neither is it completely lost. Hope grows, as it always does. A greedy heart will only plant a tree if it will enjoy the shade, and so the works of greed do not last beyond a shallow lifetime. The crew of the Discovery and the people they inspire work together to build beyond one lifetime, and while this smoldering place is bound by an Emerald Chain, it was free once and it will be free again.

Star Trek is born from a vision of a better world. We gaze off into the stars and imagine in them a brighter future of common ground. During the original series, a whole generation grew up in the shadow of a mushroom cloud but found their way through the atmosphere and to the stars above, coming together to voyage into the final frontier. The wheel of history has turned, a new generation finds themselves in darkness, divided and commodified in a place that feels less familiar by the day. Yet even as barons of greed loom higher overhead, their rockets heralding the return of the gilded age, a simple truth remains: Humanity will always look up and dream of a better tomorrow. In those dreams, unity. In that unity, strength. Strength that endures beyond a shallow lifetime, strength enough to set a chained world free.

The Lobi Consortium can shine the way toward a brighter future with the golden glimmer of pressed latinum. Hu-mans should remember the seventy-sixth rule of acquisition: “every once in a while, declare peace. It confuses the hell out of your enemies.” In case that doesn’t work, it never hurts to invest in some powerful weapons! Fresh from temporal backsluice of unknown origin, these bits of future kit are available to the highest bidder. Remember, all debts must be paid in full, even by your inheritors!

Captains opening the Discovery: Emerald Chain Lock Box may find themselves fortunate enough to win the Emerald Chain Intel Juggernaut [T6].  To say that this vessel was designed is likely an overstatement, and it is more likely a cobbled-together collection of various ships, ship parts, and technologies from any culture unfortunate to find itself under the lash of the Emerald Chain. The gargantuan size of the vessel is clearly intended to intimidate others, as are its many obvious weapon mounts. Although primarily designed to subdue and conquer, this vessel is also no stranger to subterfuge, as sometimes a lighter touch is necessary to undermine enemy capability regardless of firepower brought to bear.

The time has come to feel the frequency forces of a new Universal Console in the Emerald Chain Lock Box: The Directed Dilithium Resonance Destabilizer. Sympathetic resonance using frequencies derived from the Kelpien Su’Kal’s scream excites the dilithium in foes’ ships, delivering ongoing radiation damage and disrupting the operation of enemy engines —accelerating their speed and disabling their ability to turn. Feedback from the resonance also enhances your own ship’s systems, providing additional speed and shield healing. The console gives passive bonuses to Flight Turn Rate as well as Current and Maximum Shield Subsystem Power.

Not just one, two new Starship Traits are available. The first Trait is a cousin of the above console: Directed Dilithium Burn. This trait grants a chance to trigger a Dilithium Burst Event anytime your enemy is destroyed, dealing a great deal of plasma damage within a 4 kilometer radius. If you get exceptionally lucky, you may be able to deal enough damage to cause a chain reaction of destructive mayhem.

Carrier Wave Shield Hacking is the second available Starship Trait. Activating a Tractor Beam or Intel Ability cause the target foe’s shields to go offline for a brief period of time. This trait also passively grants bonus damage to Tractor Beam, as the greater power required for invading foes’ subsystems lends itself well to pulling on their hull.

There are many spectacular technologies in the 32nd Century.  The Hurricane Wave Device is one of them, being able to send out an unexpected cone of Kinetic force to make quick work of the forces of gravity -- and foes that get caught in it.  The resulting blast sends your enemies backwards to impact on surfaces for additional injury, while lowering all of their Damage Resistance for a time thereafter. It can be used repeatedly, as recharging the Kit Module is quite efficient.

Capture target Foe in an escape pod and fling them into a nearby Foe or, failing that, up into the air and down again. When the escape pod collides with the ground, it detonates for Kinetic damage against the initial target and any nearby Foes, knocking them to the ground.

Fire a canister of a mild nerve agent that overwhelms the internal chemistry of targets, causing a fragile Hold with unpredictable effects. All targets are Held, and depending on physiology some may laugh, dance, cower, or otherwise rigorously emote. The gas is deployed by a pressurized canister, effecting the target and foes nearby.

Beams in out-of-Alliance partners to assist in providing security guarantees in a ground scenario. They will fight for you for a moderate surge duration before returning to the ship, ready to deploy again on a moments' notice. Lower rank versions of the power beam in fewer people, while the Tactical Kit Module can deploy up to four security team members. The Kit Module also works on a charge system, expending all charges when the power is activated and deploying one security guard per charge consumed.

Unlocking both a costume piece and a kit frame, this device replicates the look of raider Wen’s helmet as a costume. As a kit frame, it allows the wielder to retrieve desperately needed materials from defeated Foes (though organic opponents only rarely provide the opportunity). This grants a bonus to Health and Damage, which can stack up to five times. At maximum stacks, instead there is a chance to trigger a powerful Captain ability based on the profession of the Kit Frame.

A cadre of eclectic duty officers is available to openminded Captains, providing unique capabilities when placed on Space Active Duty.

Six new Captain’s Traits are also available within the Emerald Chain Lock Box. They are universal and available to all species.

When combat starts, receive a large bonus to Critical Chance for a moderate duration.

Receive a bonus to Run Speed and Recharge to Kit Modules and Captain Abilities for a moderate duration.

Damaging and enemy Marks them for a moderate duration seconds (or refreshes an existing Mark). Marked enemies receive a Damage Resistance Rating penalty for each new Damage Type they receive during the Mark’s duration.

When combat starts, receive a large bonus to Critical Chance for a moderate duration.

At the end of combat, receive a bonus to flight speed, maneuverability and Captain Ability recharge for a moderate duration.

This sinister weapon deals significant Antiproton damage and has a chance to overload the neural net of its target, causing Confusion in foes. The secondary fire is a channeled beam; as long as the trigger is held down, the beam Holds and damages the foe, though this initially doesn’t work against larger foes and does have a maximum duration. If the beam is held long enough, the foe will be Confused after they are released, and even larger foes may be Held in such cases. 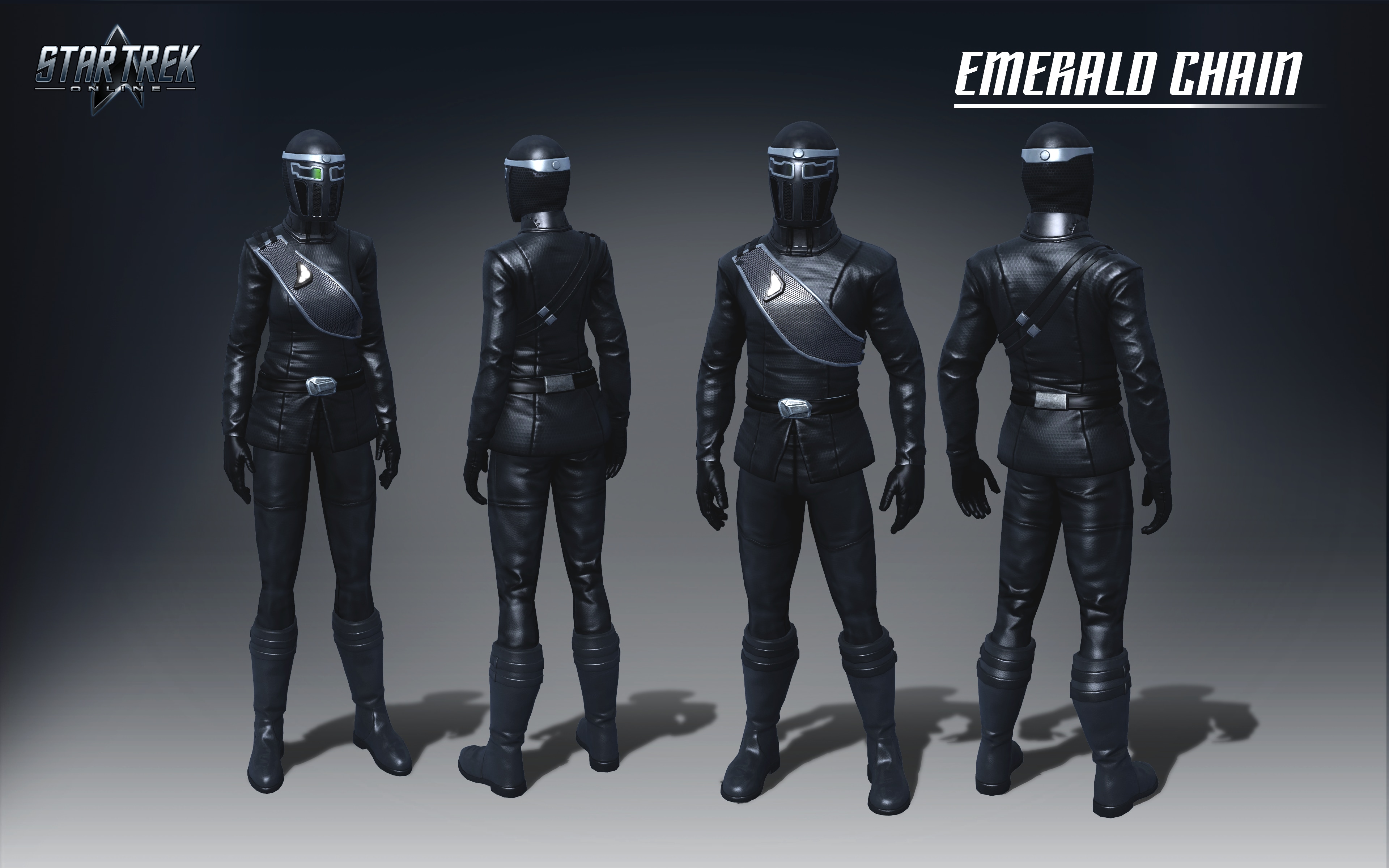 This unlocks both a costume and an armor. The eclectic ensemble is a common sight in Emerald Chain installations of the 32nd Century. The armor itself provides balanced protection with a lean toward physical threats. Activating the armor’s special capability reduces the recharge time of weapon secondary fire.