The Fall of the Old Ones 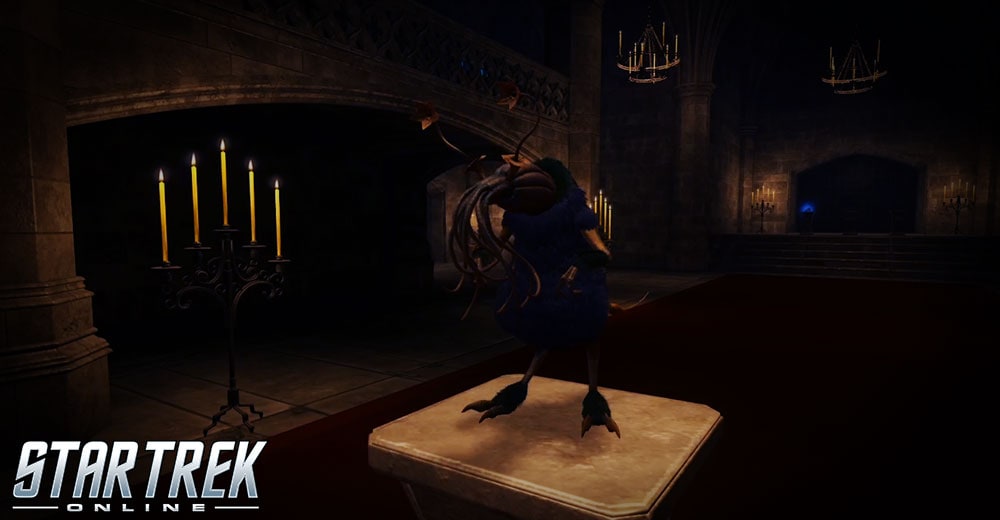 Powerful extragalactic beings known as the Old Ones have traveled to the Milky Way galaxy to study the worlds and life forms there. Through the use of a powerful device known as a Transmuter, the OId Ones are able to perform amazing feats, including mind control, illusion, and teleportation.  This tremendous power was detected by a group of Devidians, and the malevolent creatures moved to seize the Transmuter and imprison the Old Ones.  Should the Devidians learn the secrets of the powerful device, every living being in the galaxy will be vulnerable to attack.  It’s up to a squad of brave officers to travel to Castle Pyris and thwart the latest Devidian plot!

It's time for STO's first ever Halloween Event! Like the First Contact Day event, this new three week event begins with a single activitiy, and will be expanded in the years to come. This time, Captains will find themselves transported to an ancient castle on Pyris VII. The classic aliens from the Original Series episode "Catspaw", the Old Ones, have returned once again to study humanity - but their plans have been disrupted by the Devidians! Can you navigate the darkness and terror of two of Star Trek's spookiest villains, and escape with your lives, or even your souls?

Participating in this event grants daily progress towards the Grand Prize: The Transmuter Wand Universal Kit Module, and the Old One Vanity Pet. Additionally, the first character on your account that claims this reward will also receive 25,000 Dilithium Ore, and 3 Featured Episode Reward Boxes. Obtaining the Grand Prize requires 14 daily progress, and Captains can earn one daily progress per account per day by playing the brand new Task Force Operation: Cat's Tale!

Activating the Transmuter wand artifact transmutes the target into a sentient black cat. This unfortunate cat creates a Bad Luck Aura around its allies that disables Shields and most Powers when too close. The transformation is so terrifying that most of the cat's former allies will flee at the sight!

Non-combat pet. This ancient being, an Old One, took an interest in you for helping its people. He is observing you as much as you are observing him. It is more powerful than you can possibly imagine - you are more likely his pet.

This is a special event for the spooky month of October, and is not part of an Event Campaign. You'll be able to try out all of this new content October 13th on PC, Xbox and Playstation. We hope you enjoy this special event, Captains, and try not to get too scared.