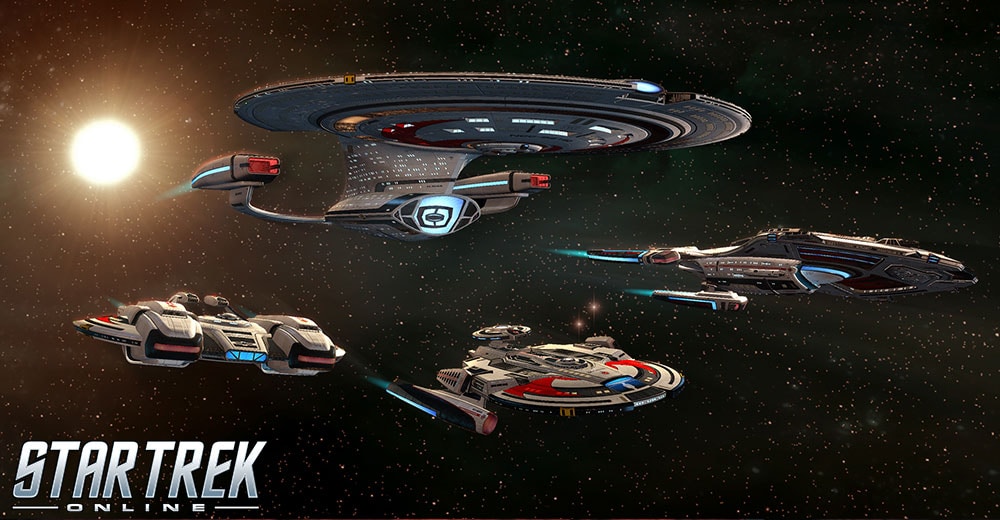 NOTE: THIS TRANSMISSION HAS BEEN FLAGGED FOR REVIEW BY STARFLEET INTELLIGENCE. SECURITY CLEARANCE PI-1-1-0

This report describes initial qualitative and quantitative findings for several new variant starship classes deployed in the past several months. These starships rep//resent an essential step on the path to glory for the Terran Empire. While there is merit in pursuing generational leaps in technology, it would be foolish for us to simultaneously neglect incremental progress // and improved flexibility as we see more new construction come online. In the wake of years of conflict and tragedy, we see the demands on Starfleet expand almost daily. To meet those needs we must be creative // and maximize the yield from our efforts by matching the platform to the mission. When we do not have an appropriate weapon to accomplish the mission, // we must prioritize the development of new class variants based on existing or planned construction to meet these needs quickly and efficiently.

This is, of course, a long-standing tradition in Starfleet, but is especially relevant now as we utilize advancements in rapid prototyping, decalithium power systems, and // confiscated technologies from Imperial conquests. Starships have never been more modular, and to bring the Empire’s might to bear we must be willing to adapt our hardware as well as our tactics.

Review the attached readiness reports and mission profiles for several new starship variants launched earlier this year. //  This report has been compiled from reviews of logs, internal sensor data, and crew interviews. From these results I remain bullish on the viability of further “Flight II” variants, // and expect their versatility to be a powerful arrow in the Imperial quiver.//

The Cabot was initially slated to be a the eleventh Shran-class starship to be commissioned for long-range anti-piracy duty, but the escalation of tensions within the Klingon Empire suggested a need for a starship that combined the Shran’s strategic endurance // with a heavier alpha-strike capability. The Cabot features two large dorsal pylons attached to the main hull inboard of the nacelles. These pylons // mount versatile probe and warhead launchers. Compared to the Shran, the Cabot has much more limited cargo space as // a large portion of its troop bays have been sacrificed for an increased magazine size. // To accommodate these new systems, the Cabot’s sensor and deflector systems are more tightly focused favoring accuracy in a small area over general situational awareness.

Inspired by the Soyuz-class that saw service in the late 23rd century, the U.S.S. Bozeman began life as a Reliant-Class Advanced Light Cruiser. // Compact and versatile, the Reliants are an unglamourous but vital asset to the Imperial Fleet. As the God-Emperor Napoleon once said, “Amateurs discuss tactics, but professionals study logistics.” // With this increased logistical capacity, along with the launch of the multi-mission light cruiser U.S.S. Clarke and her sister ships, we have seen a rapid replenishment of Starfleet’s frigate and light cruiser // Order of Battle.

To supplement these lighter units, The Bozeman was earmarked to pilot a “Heavy Frigate” program. Starting with the Reliant-class space frame, the Bozeman received a suite // of additional sensors, variable payload launchers, communications equipment, and an extended aft superstructure housing a third shuttlebay.

With these improved command and control facilities, the Bozeman could serve as a small squadron flagship, orchestrating survey or defense operations for a frontier sector, working in concert with other light units. // During fleet engagements, the Bozeman is perfectly suited to coordinate screening elements and remove combat load from the larger fleet combatants.

While the increased capabilities and firepower do make the Bozeman superior to its Reliant cousins in every measurable sense, the resources required to build it are 70-85% of the tactically superior Shenzhou class, // so it is likely that if any more Bozemans are made they will be Reliants slated for an upgrade, amortizing the increased cost over a longer service life.

Even for the most bellicose among us, I will be the first to admit that the Trailblazer is a bit of a monstrosity. // When I initially reviewed the proposal to modify the sleek Pathfinder-class Trailblazer into a gnarled mess of right angles covered with phasers, sensor arrays, and launch tubes, I // almost had the engineer responsible shot into space. But after enduring a bit of her groveling, I came to see Commander Whetu’s reasoning: by combining the extremely robust and sensitive sensor suite of the Pathfinder // with a variety of weapons and particle emitters, the Trailblazer could become a valuable long-range laboratory able to conduct large-scale experiments using exotic particles and radiation.

Of course, the Pathfinder’s warp power system is not designed to handle such a huge collection of // weapons arrays, so in a combat scenario it would not be able to make use of its entire arsenal at once. That said, with its state-of-the art sensor suite, it could use its instruments to detect weaknesses in a target’s shielding and tune its specialized equipment to exploit any weaknesses it discovered in real time.

The Andromeda-class Exploration Cruiser was one of the earlier examples of sixth-generation Starfleet technology, and it proved itself a capable but temperamental starship during Operation // Delta Falling and the subsequent Iconian Campaigns. Still, its versatility, survivability and range made it a powerful// exploration cruiser at the hands of an experienced crew. After a small round of upgrades, the base Andromeda design has had its kinks ironed out.

One of the newest Andromeda-class starships, the U.S.S. Pegasus was heavily damaged at the Battle of Empersa but was able to return to Spacedock under its own power. // While discussing its repairs, ASDB engineers proposed a variety of upgrades and structural modifications. Compared to the Andromeda, its power systems have been supplemented to drive an advanced suite of // heavy defensive systems. This comes at the tradeoff of lower power output for the Structural Integrity Field generators and some C2 capacity, but it should provide an interesting mix of capabilities as a heavy explorer capable of long-range exploration and defense.

//Any imperial officer worth their salt knows that vigilance and adaptability are key tools to survival. This is true for the individual and for the // starship. The true strength of Starfleet and its Engineering Corps lies in its diverse persp//oyalty to the Emperor, of course, but also its ability to innovate when it comes to tools of viol//ploration.

In the 11+ years that Star Trek Online has been boldly going, we have brought hundreds of ships from the Star Trek Universe to life. Not only have we recreated ships featured in Star Trek shows and films, but we have also developed a unique language for what starships look like in the second decade of Star Trek’s 25th century.

Beginning with Age of Discovery, we found ourselves building Starships to an ever-increasing level of detail, and over the past few years have remastered many of our fan-favorite ‘canon’ ships to an unprecedented fidelity. But this has left a gap in quality between the newly-remastered “canon” starships and some of our older “STO-Original” ships meant to be the evolution of canon-fan favorites such as the Galaxy to the Andromeda or the Intrepid to the Pathfinder.

And so, when we decided that the plan for our next huge story arc was going to be the Mirror Universe, we got excited, as this was the perfect time to address that quality gap. We wanted our STO original designs, starships made with our signature style, to match the fidelity and detail we had been able to imbue in the starships from Discovery and our recent Legendary ship remasters. In the Mirror Universe, the 25th Century Starfleet would be the ‘bad guys’ and we could set aside time to make sure their ships were up to snuff.

This meant that we could remaster some of our favorite 25th-century designs, and in addition, create some new variants to add variety to the updated Terran Imperial Fleet. (NOTE: These new variants are NOT available as playable ships for the time being!).

The goal with these changes was to be able to put these STO-era starships next to our remastered Galaxy or Intrepid class and have them both co-exist with a similar quality and attention to detail. We can’t wait for you all to get a closer look at the hard work that has been done, and we hope you enjoy taking some of these ships out for another spin.

Here is a breakdown of all the Starfleet ships that have been updated. Some were total remasters, while others were less-extensive material and detail updates. If you have one of these ships, make sure to visit the Ship Customization interface and select the proper preset, then apply it to your ship, to see the update correctly.

See you out there, thattaway!