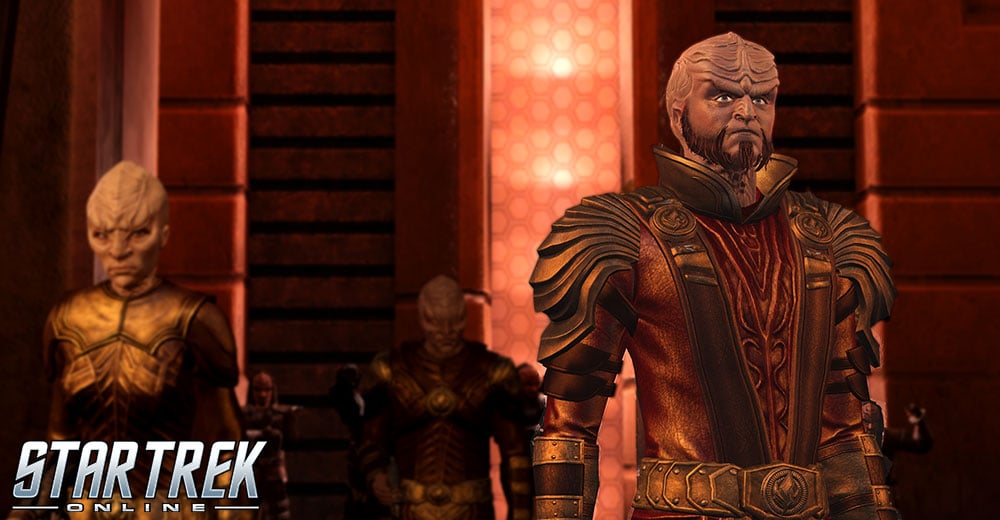 As part of our upcoming content release, from May 25th to June 24th (for PC Captains) and later this year for Console Captains, a special event calls to glory: Only Qo’noS Endures. This new event will provide brave Captains with honor and epic rewards – the Imperial Assault Ground Set. Read on to find out more about the event and its rewards.

Once Captains have obtained 40 daily progress on their account, they can claim the Imperial Assault Ground Set. After that, the event will still be playable, granting a scaling Dilithium reward that begins at 8,000 Dilithium Ore and scales by 1,000 Dilithium Ore for every day you participate in the event, up to a cap of 50,000 Dilithium Ore per day.

Aakar’s web of deception tangles around him as he approaches the decisive hour. His signature blend of brutal force and cunning electronic subterfuge are on full display in his personal regalia, including the devastating Mycelial Rift—his armor contains a fabricator capable of deploying drones, which in turn open personal Rifts on his enemies. The set’s weaponry combines nanopulse plasma and traditional disruptor technology, allowing either the pistols or the bat’leth to inflict foes with both a plasma burn and disruptor damage resist penalty simultaneously. The shield contains the always important backup plan, should things become… untenable. It refills itself and provides several seconds of enormously improved Critical Strike Chance. However, it is in combination with each other that these devices truly shine.

As these elements gather, they rapidly become more than the sum of their parts. Engaging foes with weaponry taxes the processing power of the technology protecting their fragile bodies, making it ripe for a Cunningly Timed Hack (2 pc) to slow their escape. With a third system in place, the personal decimation of a disloyal squad becomes almost elegant. When many Foes Experience Bij! (3 pc) at the same time, Kit Module and the armor’s Mycelial Rift Drone Fabricator recharge times are dramatically reduced. With all four items in place, Imperial Destiny (4 pc) is assured: the armor’s Mycelial Rift Drone Fabricator deploys two drones at once, Cunningly Timed Hack roots foes, and Experience Bij! applies a colossal bonus to Kit Performance for a moderate duration.