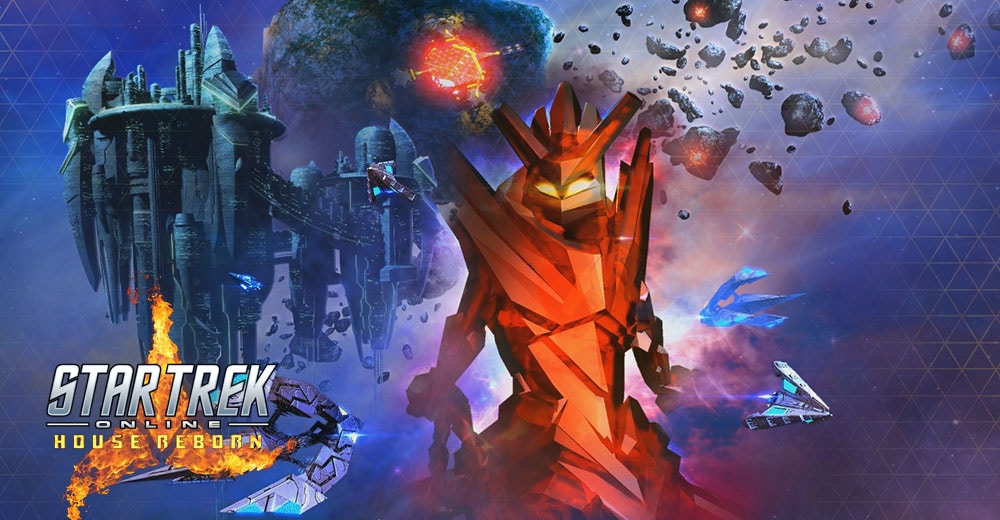 While major powers struggle for stability in the midst of a Klingon crisis, the Tholian web extends unseen above their prey. They make no distinctions between the Romulan Republic and the Tal Shiar. They are advanced, enigmatic, and patient… and they have chosen this moment of galactic distraction to strike. Beginning on May 4th for PC and soon after for Console, the Tholians imprison a significant portion of the Romulan Flotilla in the Azure Nebula while they attempt to ensnare and abscond with the formidable Vault. How many ships can the Alliance spare to deal with this machination? Will it be enough?

For three weeks, we’ll be running a special event in Star Trek Online called Tholian Trouble. This Event will include multiple TFOs previously featured individually in a combined Featured Event that will allow players to choose their preferred trial each day, while earning Daily Progress toward a new grand prize reward. Play Azure Nebula Rescue to pluck captured Romulan ships out of Tholian webs in a murky nebula, or select Vault: Ensnared to prevent them from stealing away a massive fortress full of priceless research.  We've made several updates to polish these two TFOs, to make your experience even better.

Participating in this Event will give all players the opportunity to win the Universal Console – Tholian Web Array for their entire account! Keep reading for details on this item, how you can participate in the Event, and what additional prizes may be earned.

As you're rescuing Romulan ships from the Tholian web-bases, you'll now be assisted by the I.R.W. Leahval—the flagship of the Romulan Republic. But be careful, because during the fighting, more Tholian reinforcements will show up to hunt you down!

In addition, we've streamlined the optional objectives so that they should be approachable, and instead of rescuing a small number of ships over two small periods of time, you now gain bonuses for rescuing some ships early through the event, and for reaching a higher total overall during the event.

We've also added map markers so that when you use your overhead map, you can see exactly what Romulan ships are being held and where, along with their values for the TFO.

Plus, our environment team has revisited the Azure Nebula itself to update its beautiful coloration and gaseous shapes!

When you arrive to assist the Vault, you'll now find that the various Reman ships defending it are ensnared in webs. Fight off the Tholians, destroy the webs, free the Reman ships and you'll earn bonuses. Plus, if you free all of the ships quickly, you'll automatically advance to the next stage of the TFO—no more waiting!

Once the Tholian vault weavers arrive to ensnare the Vault, they'll take a tighter formation, and they travel in groups. This means you'll spend less time flying from one side of the Vault to the other, and more hunting down Tholian ships! You'll need to be quick about it, because if you don't manage to stop the Vault from being ensnared, Obisek will trigger a thalaron cascade that will destroy the webs but will also do serious damage to your ships.

Finally, when you enter the micronebula to fight the Tholian flagship, you'll see UI elements on the map to show you where to go, and your mission tracker will show the name of the additional dreadnought. Defeat the flagship and the additional dreadnought quickly for bonus rewards, or focus on just destroying the flagship and its escorts to finish the mission. You'll have to fight them in the micronebula, though, so remember what you learned from Star Trek II: The Wrath of Khan—tactical view will be inoperative, and shields will be useless!

To go along with these changes, we've also increased the number of marks rewarded by both TFOs.

This Featured Event is the second of a series of upcoming Events that will participate in the second installment of our multi-event system known as an Event Campaign. For the 2021 Event Campaign, a few changes have been made.