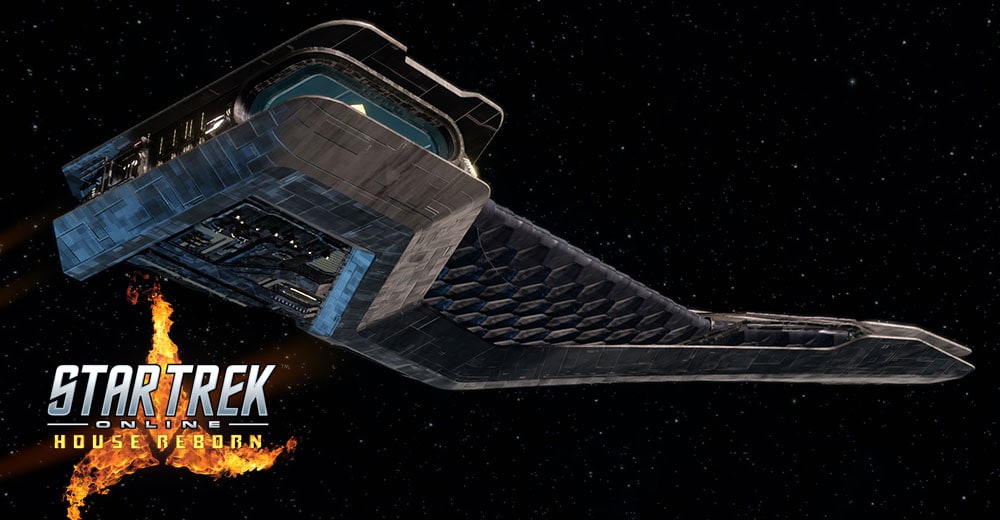 The current run of the Infinity Lock Box will continue with the addition of items found in the Angel’s Wake Lock Box, as well as yet another all-new Starship!

Starting on May 4th, 2021, players on PC will have the chance to obtain and captain the Kwejian Pilot Frigate (T6). This agile and versatile vessel was flown on-screen by the former-courier Cleveland Booker, as an ally of the U.S.S. Discovery during Season 3 of Star Trek: Discovery.

Few ship designs so perfectly marry high maneuverability with sturdy defenses as this Frigate. While ships of this class are most frequently used by privateer pilots, smugglers, and other fringe types who most frequently look to run from a fight, the overall design is more than capable of standing toe-to-toe with other modern ships of the line, and has an edge in combat against larger bulkier capital vessels. Its integrated 'morphing' technology only adds to its flexibility and versatility, making this ship truly a joy to pilot, and an exceedingly difficult fly to swat. This Frigate definiteely holds a grudge.

Initiate a sudden reversal of direction, using the ship's morphing mechanisms. The massive power draw from this maneuver will briefly disable your Weapons and Auxiliary Subsystems, but you will benefit from increased Critical Chance and Critical Severity for several seconds after it is completed.

This innate ability is part of the ship, and does not require any items to be equipped in order for it to be active.

The morphing tech employed by some 32nd century vessels allows for unique geometric hull configurations that can dramatically reduce, or even eliminate, the damage that can be caused by hull-to-hull impacts. This assembly leverages this technology to turn the ship into a projectile, allowing extremely high-speed ramming maneuvers that leave the ship unscathed.

While transformed into this mode, the ship can repeatedly execute a maneuver dubbed a “Superluminal Smash” which deals heavy kinetic damage to foes in a cylindrical area of effect while sending the ship approximately 5km forward with each successive jump. This maneuver may be executed multiple times with a short recharge, as long as the Smasher Assembly is active. The strain this causes to other ship subsystems means it can only be deployed for a limited amount of time, however.

This console mod is restricted to the Kwejian Pilot Frigate, but may be used in any console slot. Only one of these consoles may be equipped on a ship at a time.

While this Trait is slotted, the ship will gain a scaling benefit based on the highest rank among nearby foes once every 5 seconds. This benefit will manifest as a bonus to Defense Rating, Physical and Kinetic Damage Resistance and a quick burst of Shield and Hull restoration, while also reducing your outgoing Threat Generation (if Threatening Stance is not active). The value of these benefits is based on having a high-rank enemy within close proximity: Cruiser, Battleship, or Dreadnought.

This benefit only triggers if there is a Cruiser, Battleship, or Dreadnought within range, and only the highest possible benefit will apply. The benefit will only be active while in combat.

32nd Century Phaser space weapons have a chance to recover the recharge time of Bridge Officer Abilities, providing an upfront burst of recovery and accelerating the recharge for a significant duration thereafter. Repeated triggers of this effect provide the upfront burst again and refresh the duration of the over time bonus. The cannon versions of these weapons that come with the Kwejian Pilot Frigate will not be upgradeable, but these weapons will be available elsewhere in the future.

The Kwejian Pilot Frigate will employ it's morphing abilities, instead of the usual jets, when executing pilot manuevers.

The following items from the Angel’s Wake Lock Box will also now be available within the Infinity Lock Box: