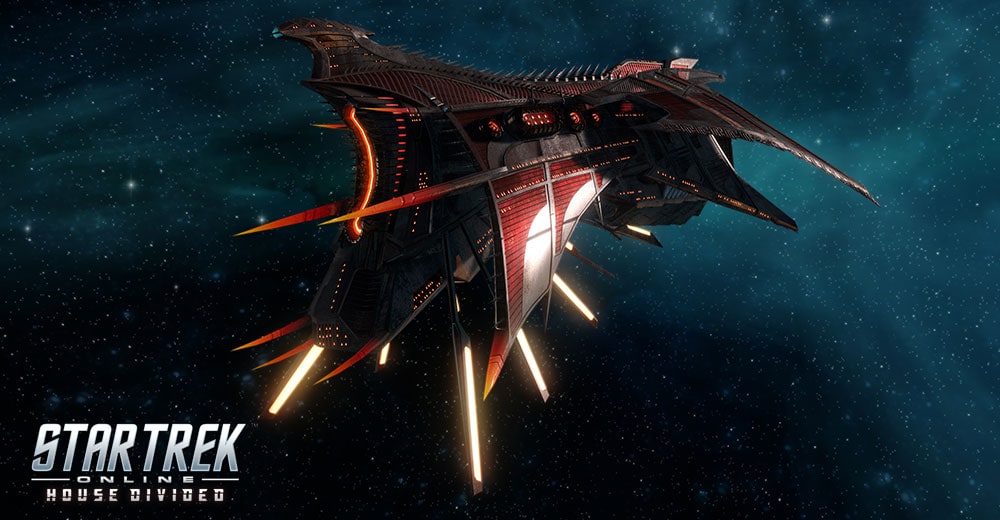 During the upcoming 2020 Winter Event, players participating in the festivities available at Q’s Winter Wonderland can earn Daily Event Progress towards an exciting new ship by participating in any of the following activities once per day. As with other recent events, progress towards this ship is account-wide, as is the final reward!

Earning a total of 20 Daily Progress will allow players to claim a Fek'Ihri Gok'tad Carrier [T6]!

Once this starship is obtained by any character on your account, all of the characters on your account will be able to claim the Fek'Ihri Gok'tad Carrier [T6] from the Account Claim tab within the Event Store (in the Event Tab of the Mission Journal).

In addition, because this ship is now cross-faction, we are making the T5 Kar'fi and the S'kul Fighters and Fer'jai fighters cross faction as well.

The Fek'Ihri have returned to the galaxy in force with brand new ships over the past few years, but now they return to a classic design. The Gok'Tad takes the lessons these Klingon demons learned from the Kar'fi, and apply it to a fearsome new ship class.

The Fek'Ihri Gok'tad Carrier comes with the Fiery Charge Universal Console equipped. Summoning all of the powers of Grethor, the Gok'tag fires three spectral, flaming chains, linking itself to the enemy ship and pulling itself in at high speed. As it rams through the enemy ship, it does a massive amount of fire damage. This console also provides a passive boost to fire damage and flight speed.

Upon reaching level 5 in your Fek'Ihri Gok'tad Carrier, you unlock the Grethor's Weapons Starship Trait. While this trait is slotted, launching hangar pets gives your weapons additional fire damage, that scales with your enemy's missing hitpoints.

These fearsome hangar pets come with this ship, and may be slotted on any Fek’Ihri Carrier. Additionally, if you own the Kar’Fi Battle Carrier, you may equip the S’Kul Fighters on this Dreadnought Carrier.

This ship can also equip the following hangar pets: