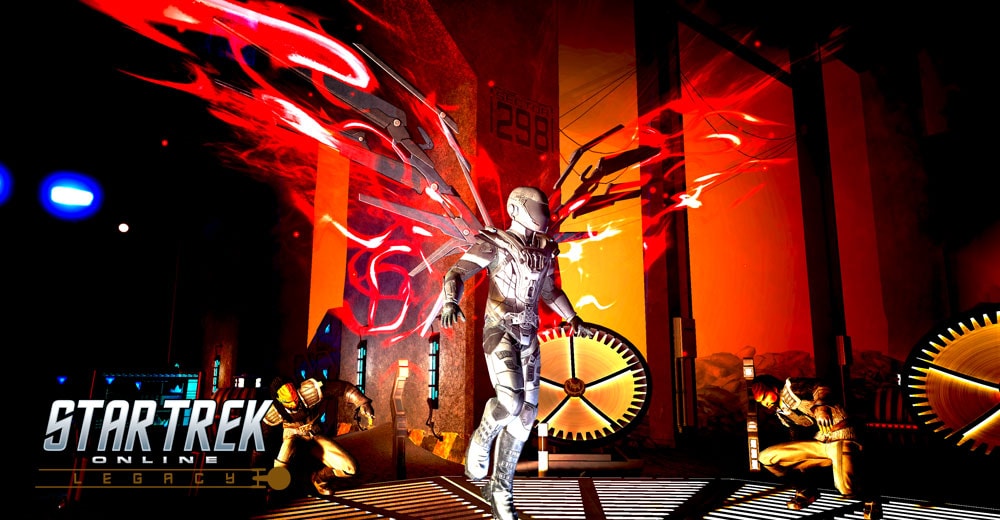 As part of our upcoming content release, from June 30th to July 30th, PC Captains playing Star Trek Online will have access to a special event. We want to give you the details now to prepare – but the name of this event might be a bit of a spoiler, so we'll have to hold that back.This new event will provide participating Captains with an epic reward: The Red Angel Suit. Read on to find out more about the event and its rewards.

Once the player has obtained 40 daily progress on their account, they can claim the Red Angel Suit. After that, the event will still be playable, granting a scaling dilithium reward that begins at 8,000 dilithium ore and scales by 1,000 dilithium ore for every day you participate in the event.

In Star Trek: Discovery, the Red Angel Suit was a powerful device capable of traveling through time by thousands of years. Now, Khitomer Alliance scientists, with the help of the Excalbian construct Michael Burnham, have managed to recreate some of the functionality of the original suit to outfit their officers. The Time Crystals necessary to travel far through time weren’t possible to recreate, but the suit itself was. Powerful and versatile, it functions as standard combat armor until its special properties are needed. These properties, referred to as Red Angel Mode, can only be used for a short while before the systems must recharge.

If the wearer would ever be defeated while in Red Angel Suit is equipped, the Red Angel visits them from the future of their timeline, reviving them and releasing a shockwave blast, knocking nearby enemies down and damaging them. This effect has a separate internal recharge time.

The power of the suit goes beyond saving yourself from certain death, however. By activating Red Angel Mode, you will be able to engage the suit's full power, trading your action bar for the abilities granted by the suit itself and transforming into the Red Angel.

When the wearer engages the suit, a number of things happen at once. First, a blast of energy knocks back, disables, and damages nearby enemies. Second, their appearance temporarily becomes that of the Red Angel. Third, they trade their normal weapon active abilities for a new set of abilities. Fourth, they receive large bonuses to speed, damage, and damage resistance.

The Red Angel can activate Temporal Shockwave against a Target Foe. This deals heavy damage to the Target and nearby Foes, and shunts them forward in time several seconds, removing them from the battlefield entirely until they arrive in the future.

The suit can also discharge its internal power supply for an area of effect EMP. Though smaller than the one seen on Kaminar, this EMP still disables all mechanical abilities of nearby Foes as well as dealing heavy Electrical damage to mechanical and incorporeal entities.

Large Hyposprays and Shield Recharge devices are integrated with the suit, and may be used without consuming a device. This has a modest recharge.

This is a special event for our next content drop, and is not part of Event Campaign II. You'll be able to try out all of this new content in a little less than a week on PC, and after the Risian Lolhunat Festival on Console. We hope you enjoy this special event, Captains, and we'll see you in game.