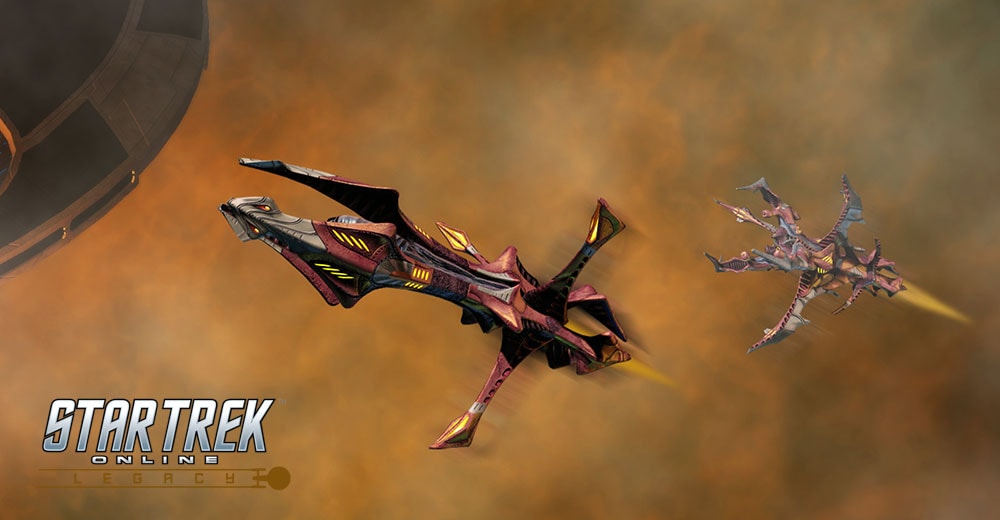 The Infinity Lock Box, containing prizes from nearly all previously-retired Lock Boxes, will be available again for an appearance on PC During this time, enemies defeated on both Ground and Space maps will have a small chance of dropping one of these prize-filled packages.

This run of the Infinity Lock Box will feature the addition of the Undine Cheirax Bio-Warship [T6], and the Borg Lockbox contents! Meanwhile, the Undine Kiwavi Bio-Cruiser [T6] will be joining the Lobi Store! Continue reading further on for the full details on these new offerings.

Along with the undine ships and all of the prizes offered in previous appearances of the Infinity Lock Box, additional prizes originally seen in the Borg Lock Box have been added to the rewards! They now include all of the following:

This update to the Infinity Lockbox brings with it updated versions of the Undine ships from days past. Read on to learn about the new Undine Cheirax Bio-Warship [T6] and the Undine Kiwavi Bio-Cruiser [T6]!

The Undine Cheirax Bio-warship [T6] is an upgraded version of the Undine Nicor. A better understanding of Undine bio-technology, movement in fluidic space and other advances in impulse technology have allowed salvage teams to recover and rebuilt a much more complete picture of the starship’s combat capabilities, enhancing its ability to move through normal space to match how it dances through fluidic space.

This starship features a Commander Tactical/Pilot and a Lieutenant Commander Universal/Intel specialist seat.

This massive energy discharge has been adapted for combat use, instead of as a method of planetary destruction. By calling in energy-focusing drone ships, the Undine vessel can then channel this energy into an attack that will devastate the enemy ship, and all of their nearby allies. The attack detonates multiple times upon colliding with the enemy, each time emitting a ring of energy that gets progressively larger over the course of the three detonations.

This console additionally proves a passive bonus to Structural Integrity and Weapon Power.

While this trait is slotted, activating Attack Pattern Omega or any Pilot Bridge Officer power, you and all teammates within 10km gain Omega Bond for a short time. Omega Bond boosts Damage and Defense. Subsequent applications of Omega Bond will refresh the duration of Omega Bond.

The Undine Kiwavi Bio-Cruiser [T6] is an upgraded version of the Undine Dromias. A better understanding of Undine bio-technology, communication protocols, and improvements to cross-cultural starship communication have allowed salvage teams to recover and rebuilt a much more complete picture of the starship’s combat capabilities, including its immense battlefield command abilities and enhanced maneuverability.

This starship features a Command Engineering/Command and a Lieutenant Commander Universal/Pilot specialist seat.

Pierce the dimensional divide that separates normal space from Fluidic Space, causing a rift that will pull in nearby foes, while releasing bioplasmic "bubbles" into the local region. By carefully modulating the energy emissions that create the rift, the user can control the volatility of these bubbles, causing them to have negative effects only on nearby foes - even those native to Fluidic Space. These negative effects will slow the target while dealing plasma damage.

This console additionally proves a passive bonus to Structural Integrity and Hull Regeneration.

While this trait is slotted, activating Auxiliary Power to Dampeners or any Command Bridge Officer ability will grant +Hull Regeneration and +Damage Resistance to all teammates within 10km for a period of time. This effect stacks up to 3 times.