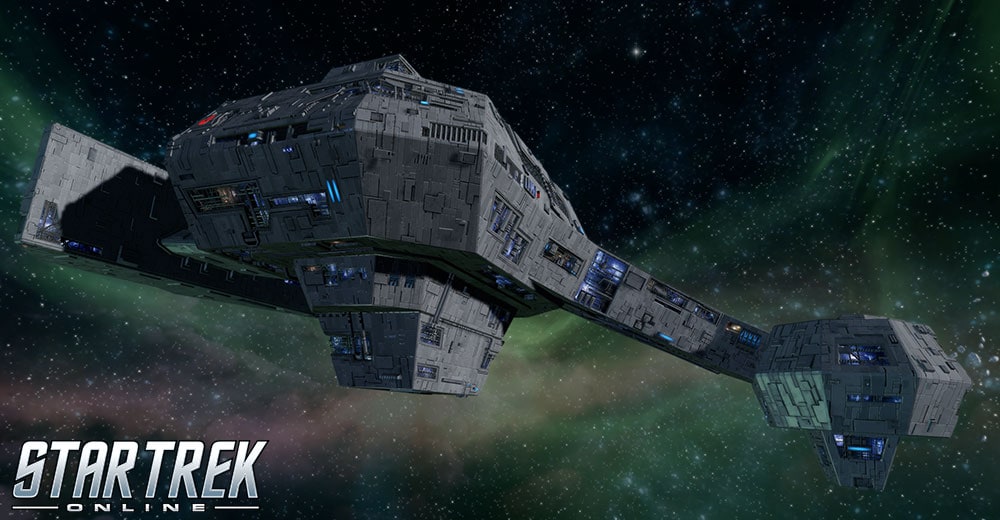 The Alliance is always establishing new and expanded relations with allies throughout the galaxy. With the recent resurgence of the Borg, outreach efforts have focused toward the Borg Cooperative. Part of this renewed cooperation has resulted in some captains being able to command the powerful, all new Liberated Borg Command Juggernaut [T6]!”

The Liberated Borg Command Juggernaut [T6] will become available with the release of the Borg Lock Box, scheduled to arrive on PC starting with our 10th Anniversary on January 28th, and on Xbox One and PlayStation 4 in early 2020. This new starship can be used as soon as you’ve completed the tutorial, and will scale with you as you level up all the way to max level!

The Liberated Borg Command Juggernaut is the heavyweight of the Borg Cooperative fleet. A reinforced hull is backed up by powerful shield emitters, which themselves are backed up by this ship’s super firepower. These defense systems are reinforced by the nanites interlaced into the starship’s hull, and its sensors are ready to spread highly disruptive topological matrices to overwhelm the computational engines of any hostiles it encounters.

This starship features a Commander Tactical/Command Station and a Lieutenant Tactical/Miracle Worker Station.

This starship can be used from any level upon completion of the tutorial experience. As you level up, this ship gains additional hull, weapon slots, and console slots.

Based on the original matrix that freed Hugh from the Borg Collective, this collection of matrices has been adapted to overwhelm a wide variety of logic processing approaches. When activated, this console deals significant plasma damage to several nearby enemies, and inflicts Viral Disruption on them for a short duration, which causes Plasma Damage and attacks Subsystems of vulnerable starships while present.

This console additionally provides a boost to Plasma Damage and Hull Regeneration. You may equip this console on any ship in any console slot. You may only equip one of these consoles.

This starship comes with enhanced regenerative Nanites in its hull that amplify any repair efforts made to the starship. After achieving level 5 in the Liberated Borg Juggernaut Starship Mastery, you will unlock the “Enhanced Nanite Regeneration" Starship Trait. While this trait is slotted, when you activate a Captain or Bridge Officer Heal on yourself, you will gain a significant boost to hull regeneration for a short duration. This boost will increase in value the more hull your starship is missing. This buff will not stack.

The Liberated Borg Command Juggernaut features an innate Plasma Disintegrator ability. When activated, your starship fires a massive plasma bolt at your target that deals intense Plasma Damage to any foes it passes near while it chases its target. It detonates upon reaching its target, dealing devastating amounts of Plasma Damage to everything nearby. Additionally, any foes who come into contact with either this bolt or the explosion will disintegrate upon defeat, instead of the normal violent explosion of a Warp Core Breach.