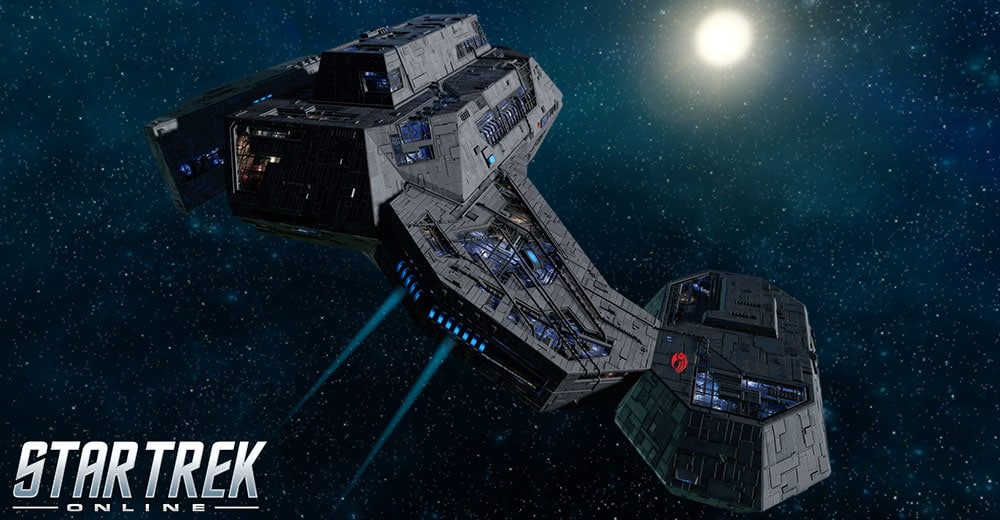 ”We are the Borg. Lower your shields and surrender your ships. We will add your biological and technological distinctiveness to our own. Your culture will adapt to service us. Resistance is futile.”

The assimilated comms array broadcasts the message on repeat, diligently following its last directive even as a tractor beam drags the debris toward an Alliance vessel. The mood there is tense, the crew well aware of the risks. Understanding Borg technology is key to understanding the Borg, the assimilated species themselves, and possibly even to freeing them.

As a society grows, it must confront the dangers of its own technology. The industrial revolution brought global warming, the atomic age brought M.A.D., and today the services that connect us have splintered us into isolated tribes of alternative facts. The inconvenient truth is that we must adapt or perish. The Borg are a terrifying embodiment of the price of failure. Like a black hole formed from collapsing culture, they are a technocratic singularity, a walking point of no return. They challenge us to temper our technology with humanity, and to cherish what makes us different even as we grow together.

Star Trek is at heart a vision of a positive future, where hard social work and brilliant technology have made life better—the opposite of the Borg, and contrasted with other sci fi. Science fiction is often set in a dystopia. These warnings are often prescient and valuable, but it is harder to be for a vision of the future than against one. To seek the truth – the guiding principle on which Starfleet is based – requires vulnerability to change. It requires courage and decency in equal measure. When the hard moment comes, what will you stand for? Do you deserve to wear that uniform?

Blind to all this, the Lobi Consortium has been contracted to provide you with examples of reverse-engineered Borg technology in specially sealed lock boxes. They make it a point to not discuss details when clients indicate their cargo is a maximum risk factor. Given our lack of logistical options, we have been forced to accept discretion.

The Liberated Borg Command Juggernaut is a vessel with a unique design history. Designed by the recovering minds of newly liberated Borg, its disjointed appearance reflects its designers’ rebellion against conformity, while the solid internals reflect a return towards structure to keep one sane. The result of this internal conflict is a starship that is a terror in external conflicts, possessing many of the Borg’s most fearsome strengths in combat, such as the capability to launch Plasma Disintegrating Blasts.

The Liberated Borg Juggernaut comes equipped with the Disruptive Topological Matrix Universal Console. When activated, this console deals significant plasma damage to several nearby enemies, and inflicts Viral Disruption on them for a short duration, which causes Plasma Damage and attacks Subsystems of vulnerable starships while present.

Regenerative Nanites are at the core of some of the Borg’s most powerful vessels, helping to keep them in optimal fighting condition, and this is no exception. When the necessary conditions are met, this trait will automatically activate, regenerating a significant portion of your starship’s hull.

Two special Universal Consoles can be acquired in the Borg Lock Box: the Cutting Tractor Beam and the Retrofitted Assimilator.

The Retrofitted Assimilator enables your ship to fire a Quantum Torpedo laced with Borg nano-probes. The nano-probes attempt to assimilate the enemy vessel under your control. The Collective they integrate the target into is a miniature hacked unimatrix the size of a typical command desk, only capable of integrating one vessel at a time. Larger assimilated ships are more powerful.

The Cutting Tractor Beam console deploys a retrofitted Borg Generator attached to one of their Kinetic Cutting Beams. This Cutting Tractor Beam attempts to harvest technology from enemy ships, dealing significant Kinetic damage over time. If the foe’s ship is below half Hull, this will tend to reach vital systems, disabling either engines or shields for an extremely long duration. The console's Distinctiveness enhancement improves integration with other Universal Consoles -- each time a Universal Console is activated, the damage of all Universal Consoles is increased for a period of time.

A new Starship Trait is also available: Regeneration Cycle. Activating at least one each of a Science, Tactical, and Engineering Bridge Officer Ability within 5 seconds repairs a substantial amount of hull.

The Borg Lock Box also has new Space and Ground weapons inside the Assimilated Plasma Weapon Pack. The Borg’s preference for this energy type is poorly understood, but the performance of their weaponry leaves little doubt at the efficacy of this choice. These weapons are available as beams and versatile ground weaponry. They replace the traditional Plasma burn with an increase in Hull or Health Regeneration and an increase in Damage. Rarely, weapon packs contain the Borg Vanity Shield, providing the aesthetics of the Liberated Borg Command Juggernaut to a ship that equips it in its vanity shield slot.

Captains may also acquire Borg Kit Module packs. These Kit Modules are universal, and can be used by any class.

Borg Kit Frames reverse-engineered from Borg exoframes are also available. They automatically communicate with gear stored on the ship to deploy a Borg Combat Structure after the use of enough Ground Kit Modules.

New Captain’s Traits are also available within the Borg Lock Box. They are universal and available to all species.

There are many other prizes within the Borg Lock Box for players to acquire, such as R&D Packs, Boosts, and other assorted items. Each box also contains a Borg Datacore, which allow the user to recover a scrap of information stored within the Borg collective, recording it in a Codex for future reference. The Datacore also contains a non-combat holographic representation of its drone of origin, which follows the player for a period of time.

Sturdy construction materials and Borg ablative nanostructures offer excellent protection from Energy damage and respectable protection against Physical and Kinetic damage. An Anti-Kinetic Shield derived from scans of Borg technology recovered by the U.S.S. Voyager protects the wearer from melee strikes and hurl the attacker away. The processing power of the gear can be used to rapidly recharge Universal Kits.

An initialism for “Biological and Technological Distinctiveness Extractor”, this Borg device is equivalent to a Compression Bolt pistol. It has a secondary fire mode that hits a single target with a high damage bolt of energy that disables them briefly and knocks them back. The tertiary Palm Strike has been replaced with Assimilate Distinctiveness, which transports the user to target Foe and injects them with Borg nano-probes. Rather than forming a Borg Drone when they fall, the nano-probes simply collect their biological and technological data. This adds a stack of Distinctiveness to the user, adding to their Max Health and Energy Damage. Stacks cap at 20. At 10 stacks, Assimilate Distinctiveness also heals the user. At 20 stacks, it gains area of effect and deals its damage much faster.