"A Meeting of Minds" 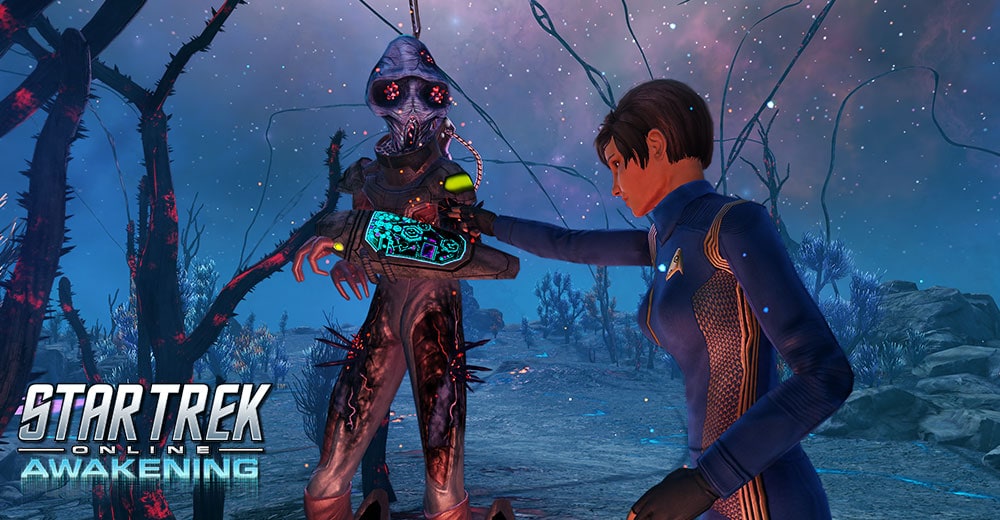 A moist wind blew across the multicolored Mycelial plain, and Amna Patel experienced it in a way she never had before.

She sat on the edge of a cliff overlooking a broad basin, the sky brilliant and full of spores, some communicating, some reproducing, some simply traveling from place to place. She had experienced a lot in her life, not the least of which was rebirth as a being made of blood, bones, and animal flesh, and moments like this gave her a deeper understanding of how strange it must be to travel here from the humans’ dimension. The humidity was almost uncomfortable against her recently acquired skin, and the spores in the air scoured her throat when she breathed. While the jahSepp knew she was of their kind, and thus didn’t seek to poison her or chase her away, she had to admit that the only world she knew felt strange and uninviting.

She took this form to communicate with the humans and the other species from their universe. She could remember being one of them, the collected memories of Lt. Commander Amna Patel, but she couldn’t understand their minds. What would they gain from destroying the Mycelial network? How could they be turned away? Is there another way through this that doesn’t lead to violence?

She heard footsteps behind her and turned to see a tall figure approaching. Both Elachi and not, Tarsev held the deliberate, imposing poise of the ancient mycelial race, but the Klingons’ weapons had side-effects, and these effects caused Tarsev to partially regain his original identity as a Romulan. Most of the changes the Elachi had forced on him remained, save a mutation to his jawline that enabled him to perform the act of physical speech.

“It truly is beautiful,” he said, with a sigh. “I wonder what you are thinking, looking out on our world with a human’s eyes.”

Patel looked back at the wide basin before her. “Seeing takes so much more effort than sensing,” she said. “Talking is more tiring than just knowing.” She smiled just a bit. “It is a strange world to these eyes,” she said, “but I can see why many of them want to protect it.”

“And many want to destroy it,” said Tarsev, stepping up next to Patel. “The Klingon weapons threaten everything. I hoped to learn what your people plan to do about it.”

“My people want to avoid violence at all costs,” Patel replied, standing up next to the tall Elachi. “I imagine your people want to travel to their universe, to fight back.”

“It is one of our options,” he said, confirming her accusation. “One of our few,” he added.

Patel looked back out over the basin. Peaceful harmony. That had been the jahSepp’s goal for as long as they have existed. They shared their world with the Elachi, whose many trips to the other universe had brought destruction, violence, torture, and death. But here, in this place, the two peoples lived in harmony, bound together by a shared need for a stable environment and a complete lack of competition for resources.

Once, Patel was a part of a global network of minds, unified by a shared outlook and a harmony of intent. Do no harm. Live and let live. “Don’t start nothin’, won’t be nothin’,” as she remembered one of Patel’s human friends saying centuries ago on Earth.

“The Alliance wants to stop the rogue Klingons, just as we do,” Tarsev said. “We can join their efforts, travel to their universe, and take up arms against those who would destroy our world.”

“Alliance, Klingons. It is all fire and thunder and destruction for them, on both sides. This mind I possess was trained to kill. I, too, feel the animal’s urge to fight and to destroy.” She glanced up into the hazy, violet sky. “That urge is what threatens us now.”

“There are nuances in conflict,” Tarsev said. “The urge for violence can be one of anger, or revenge, but it can also come from a search for justice or a need to protect what’s important. For them, violence is a tool, no more evil or unnecessary than a spanner or a hypospray.”

“Your Romulan mind begins to return to you, I see,” said Patel, her tone more caring and curious than accusatory. “Tell me: Before the Elachi transformed you into one of them, what would you have done?”

Tarsev seemed to smile. “Romulans and Elachi do not seem as different as one might think, given my new perspective. Secretive, cunning, curious, and willing to do whatever it takes to maintain their security.”

Patel nodded. “This mind’s people speak of compassion and tolerance, but yet they aim weapons at their fellow creatures with intent to eradicate them. What is there to gain from destroying these rogue Klingons, when some other animal species could rise up and continue their work?”

Tarsev placed his long fingers on Patel’s shoulder. It was meant to be a reassuring gesture, but it was awkward, unpracticed. “A deceased Klingon cannot fire a weapon,” he said. “People of that universe die and do not return. Their experiences are not carried by spores. Their minds do not live on in their people. Their actions end when their lives end. And memories of great loss can deter their fellows from following in their path.”

Patel took a moment to consider Tarsev’s words, and she found the perspective difficult to understand. “By ceasing to exist, this J’Ula will make the universe a better place?”

Tarsev nodded slowly. “She threatens the fate of two universes, and possibly more,” he said. “The plan is to commit violence upon her and her people, to avoid violence to everyone who lives, throughout reality.”

Patel looked at her hands, flexed her fingers, and sighed. “Violence against one, as an act of compassion for others.”

Tarsev tilted his head. “Yes, in a manner of speaking.”

Patel inhaled deeply, breathing in the spore-filled air as if trying to absorb the knowledge of her people. “This mind would agree with you,” she said. “I chose this form because memories of her showed great compassion. But she was also a warrior of sorts. She understood sacrifice and the potential need for violence for the greater good.”

Tarsev nodded. “I have memories of the Federation, outside of the propaganda the Romulan Star Empire fed us. They are not perfect, but they have the best interests of both worlds at heart.”

Patel looked up at Tarsev’s face, glancing from eye to widely set eye. “My people do not approve of helping one race destroy the other,” she said, “but Amna Patel knows the stakes and supports you in your goal of stopping the threat of the rogue Klingons.”

Tarsev’s strange lips curled into a smile. “You took this form to better understand them,” he said, “and it sounds as if you have done just that.”

Patel looked out over the basin once more, this time aware of all the silent spores, the reaching hyphae, the colonies of like-minded molds breaking down obsolete organic materials and recycling them back into life. The humans’ world is just as complex, just as teeming with different kinds of life. To kill them, to recycle them before their time, seemed a waste. But as with any irritant, the Klingons of House Mo’Kai could not be avoided or deterred. Tarsev was right: They must be destroyed.