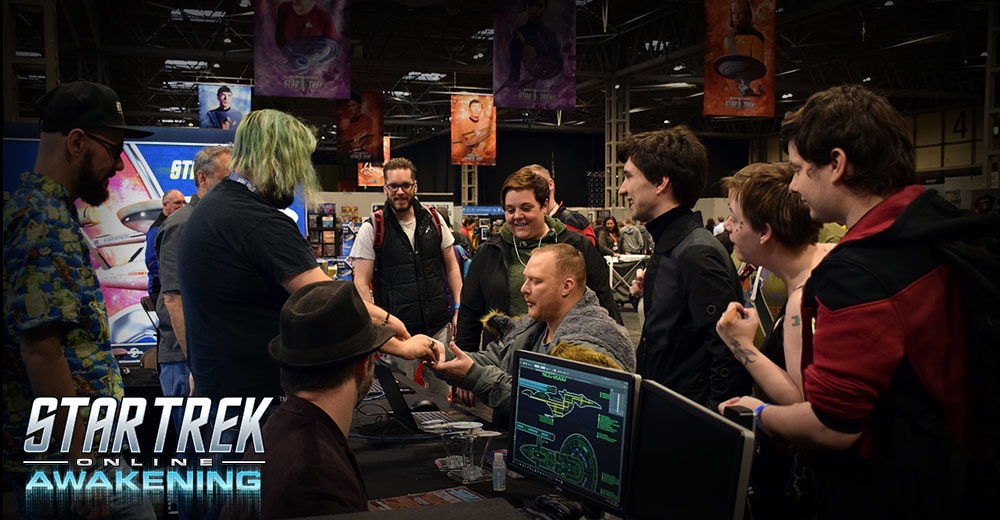 When I learned that our Away Team would go to Destination Star Trek in Birmingham, I had no idea what would await me there, and that it would turn out to be the best experience ever as a Community Manager. Of course, there was a lot of work to do. The perfect opportunity to turn that thrill of anticipation into announcements, teasers, games, and of course, to prepare the Universal Translator for Europe's biggest Star Trek party.

Thanks to our Communicators, the members of our Away Team were in constant contact, and getting there from different regions of the planet went almost without incident. I say almost, because Ambassador Kael did steal someone's luggage, but luckily, that was solved quickly, so we could proceed to our first personal meeting over fish & chips and some amusing anecdotes.

If you've worked at a Star Trek Convention before, you will know how it feels to be there on the first day before it all starts for real. There's excitement in the air. Booths are being built, the first costumes can be spotted, and you can seize on the opportunity of an empty hall for a few special photos. You meet and greet old acquaintances, the programs and presentations are being rehearsed, and everyone asks themselves the same question: "Is today the day that we will meet some of our heroes from TV?" On Friday, we took to the stage with Anthony Rapp to talk about his work for Star Trek Online. It was fantastic. We were also visited by Chase Masterson, who asked for a photo with us in front of our booth.

However, the best part of this weekend was meeting STO players at our booth. We asked every visitor to the booth if they'd heard of our game - and so many of you had been playing since the beta! The positive feedback we got from you players was overwhelming. Some came to us to just say thanks, get a photo with us, or even get an autograph on their Collector's Edition of Star Trek Online. And no one had to leave our booth empty-handed. Besides codes for Lorca and Landry as bridge officers, we had pins, communicators, and patches as gifts for you. Lead Environment Artist Scot Boyd was answering plenty of questions about the development of environments and interior maps, Lead Designer Tim Davies impressed many visitors with his many Master System Displays and his sheer endless background knowledge about ship design, and Mike and I could let our nerdiness run free and have exhaustive conversations about our favourite ships, missions, the Star Trek canon, and, yes, even bugs in the game. Of course, a frequent question was what we have planned next for the game. Typically for us, we were obviously as exact and as vague as we could be. Nonetheless, you can still look out with anticipation to our 10th anniversary in January. It will be amazing.

Destination Star Trek in Birmingham was truly a magic experience, and I am grateful to have had the privilege of being able to attend it. I really hope that we will see each other (again) at the next Convention.