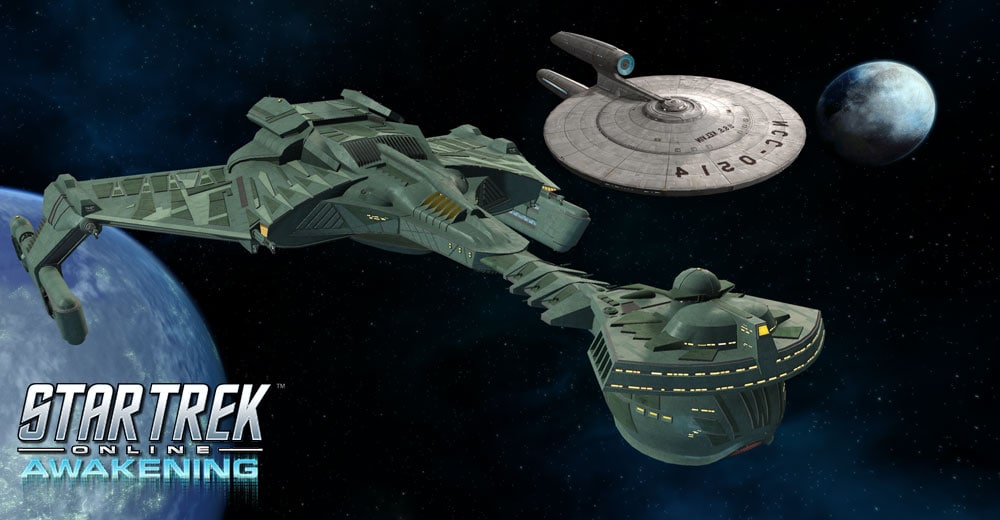 The universe we enjoy today isn’t the only one, not by a long shot. Our nearest neighbor, the ever-belligerent so-called ‘Mirror Universe’, is just one of countless roads spanning a cosmic tree of probability vast beyond imagining. From time to time, a new branch sprouts and the timeline forks again. Rarer still are the times those branches remerge, as they did with the U.S.S. Kelvin. Official contact with this universe, colloquially known as the Kelvin timeline, has been extremely limited. Nevertheless, some artifacts from that temporal neighbor have found their way into our neck of the woods.

Alternate histories are an ever-present “what if” in science fiction. Appropriately enough, they tend not to be major cultural pillars, nor are they ever entirely escapable. As we look forward to what changes in society new technology might bring, we are wise to recall how our new normal was just one branch among many. As before we looked into a dark mirror, we now peer through the looking glass at a universe we might have called home. The grass may be greener on the other side, but it’s greenest where it’s watered.

Science fiction thrives when it contrasts itself against the real world, and Star Trek exemplifies this more than most. From technological predictions to moral precision, it challenges us to be more than we are, to imagine a world better than the one we find ourselves in. Exploring other visions of the future side by side brings this continuing mission into clearer resolve. There is no one right path into the future, not all mirrors are dark, and flexibility can be as key to peace as conviction. Where must the line be drawn? Which paths forward lead us into darkness, and how might we reach beyond? We live in interesting times; Star Trek merely makes that plural literal.

The Lobi Consortium, remarkably consistent between universes, has access to technology from this othertime. Ships from Starfleet and the Klingon Empire are rumored to be available, as well as a wealth of technology, all for a hypothetically affordable fee.

The Kelvin Divergence Lock Box contains tech from the Kelvin Timeline, often Starfleet field gear and technology from the Altamid aliens encountered by the U.S.S. Franklin, but also more singular objects, slices of lives that might have been. The ship’s crew and her adversaries proved resourceful and flexible, a trait exhibited by the technology they leave for us.

The Kelvin Heavy Destroyer [T6] is an exploratory Starfleet design, boasting heavy armor and armaments. It features significant firepower and strong point defense capabilities to keep its crew and allies safe, an Advanced Engagement System to charge into the fray and protect others, and flexible bridge stations to adapt to the mission at hand. All of these features are backed up by a focus on crew safety and structural integrity.

The Kelvin Timeline D7 Heavy Destroyer [T6] is a fearsome starship, originating from the Klingons of the Kelvin Timeline. It makes good use of a Battle Cloaking device to stealthily enter a fight, sturdy defensive capabilities should the battle go long, a strong point defense system to allow the crew to focus on the real threats, and an Advanced Engagement System to prepare the ship for an honorable charge into the fray.

The returning ships can be selected by players of appropriate allegiances:

Two special consoles can be acquired from the Kelvin Divergence Lock Box as well: The Swarmer Matrix and the Hull Image Refractors.

The Swarmer Matrix console allows your ship to control deadly swarming drones which dive into enemy ships, piercing their hulls repeatedly. The console also passively improves your ship’s ability to control smaller combatants, providing a boost to the combat capabilities of Hangar Pets and Targetable Torpedoes.

The Hull Image Refractors conceals your ship using sophisticated holographic projectors, functioning similarly to a cloaking device except that the ship is incapable of moving during the illusion. This device is directly linked with ship maintenance, and a rigorous repair job commences immediately and proceeds as long as the ship remains hidden. Additionally, while the console is equipped, any healing effects which would bring the ship’s hull above its Hull Capacity grant temporary shields instead.

A new Starship Trait is also available in the Kelvin Divergence Lock Box: Concealed Repairs. Anytime your ship cloaks or placates an enemy, it recovers a significant portion of its Bridge Officer Ability cooldowns and Hull Capacity over a duration. This effect has a moderate cooldown period of its own.

Additionally, the Kelvin Divergence Lock Box has new Space and Ground weapons within the Altamid Plasma Weapon Pack. Destructive high-energy Plasma derived from the wrist weapons used by the alien adversaries of the U.S.S. Franklin, these weapons are available as cannons, beams, or ground wrist-weapons. They replace the traditional Plasma burn with a reduction in enemy Plasma and Kinetic Damage Resistance. Rarely, weapon packs contain the Kelvin Divergence Vanity Shield, providing the aesthetics of the Kelvin Heavy Destroyer to a ship that equips it in its vanity shield slot.

Captains may also find Kelvin Divergence Kit Module packs. These Kit Modules are universal, and can be used by any class.

New Captain’s Traits are also available within the Kelvin Divergence Lock Box. They are universal and available to all species.

Bridge Officer Training Manuals from the other universe open new possibilities in space combat. They are available at Ensign, Lieutenant, and Lieutenant Commander rank.

Kit Frames from Starfleet’s expeditionary forces are also available. Designed for unpredictable frontiers, these frames have a kit module included in their design. Using ground kit modules has a chance to trigger this module automatically. Which module is included depends on what profession the kit frame is for.

There are many other prizes within the Kelvin Divergence Lock Box for players to acquire, such as R&D Packs, Boosts, and other assorted items. Each box also contains three Transwarp Beaming Devices, which allow the user to beam an away team to a distant planet. Each device has a fixed destination.

The Lobi Store also has many new items available for purchase:

Bringing the possible into the real always has consequences. Each new piece of technology changes society as well as the day-to-day lives that make it up. The cultural results are never understood ahead of time. It falls to us who live during change to decide the shape of it, and we define ourselves in the eyes of our descendants by how we respond. Build your legacy with the Kelvin Divergence Lock Box, as well as the additional Lobi Store entries, coming to PC on September 10th, 2019.