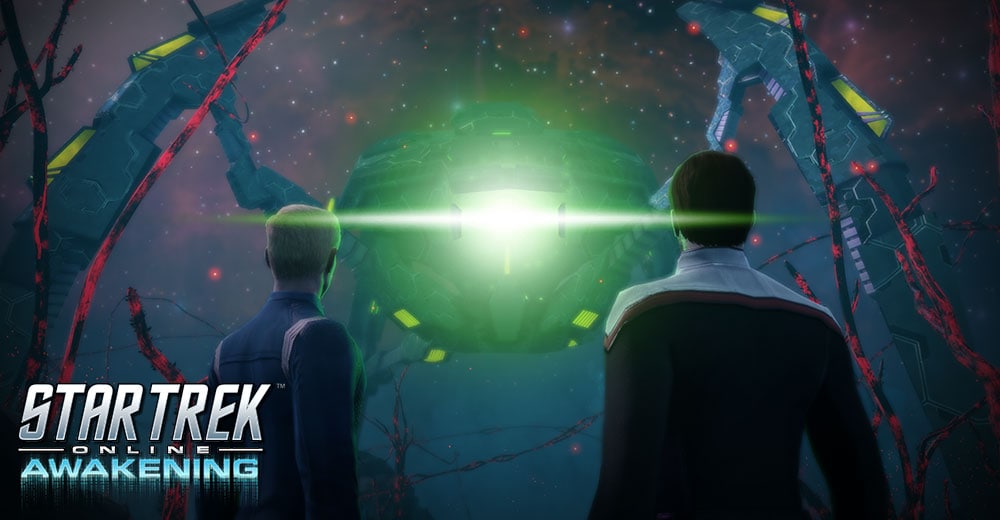 With the launch of Awakening, captains will be introduced to a new type of Event which will leverage the Event UI overhaul previously spoken about in another dev blog. The Mycelial Crisis represents a centralized Event designed to celebrate the various pieces of new Content being released, and give players a new method of engaging with the evolving story of J’Ula, and her unscrupulous efforts to rekindle the dominance of the Klingon Empire in the 25th century.

Participating in this Event will give all players the opportunity to win a Tier-6 Elachi Starship for their entire account! Keep reading for details on how you can participate, and what additional prizes may be earned.

Various new content offerings may be played in order to earn Progress Points that count toward the completion of the Mycelial Crisis Event. Each different type of content (Episode, TFO, or Patrol) offers varying amounts of Progress Points, as follows:

Patrol Info:  This update includes FIVE (5) new Patrols specifically designed for this Event, and to tie into the larger story. Any/all of these new patrols may be played to achieve Progress.

Players will be able to earn up to 60 Progress Points every 20 hours, which starts counting down when you receive your first Progress for the day. Any of the above content may be played as much as you like each day, so pick and choose how you prefer to gain Progress each day, and mix it up as much (or as little) as you like!

Accruing a total of 1200 Progress Points will allow you to claim the Grand Prize of the Mycelial Crisis Event. This reward includes all of the following:

Once earned, every character on your account will be able to claim this Starship for themselves. A separate Dev Blog containing complete details on this exciting new Starship will appear soon!

Open this package to receive your choice of any type of Elachi Disruptor Weapon, as previously seen in the Elachi Lock Box and Infinity Lock Box. All weapons received from this pack Very Rare (Purple quality and at a Mark appropriate to the level of the character that opened the box.

The weapons will Bind To Account on Pickup, and may be upgraded as normal after receipt.

These represent a new spin on the existing Ultimate Tech Upgrades. While they still set the applied item to its maximum Quality/Mark, they may only be used on Starship Weaponry. Use these to take you 3 favorite pieces of Elachi Disruptor Weaponry to the max, or whatever other weapons you love using in Space.

After claiming the Grand Prize, you will unlock the option of earning additional Dilithium Ore each day that you continue participating in the content associated with the Mycelial Crisis. Each day you earn the daily limit of 60 Progress Points you will be automatically granted a bundle of Dilithium Ore.

This bonus reward will begin at 5,000 Dilithium Ore for the first day’s completion, then scales up with each subsequent bonus completion that you achieve. The more you play, the more you continue to earn!

For players interested in instantly completing the Mycelial Event – whether that is due to worries over finding the play time to complete it, or simply wanting to move immediately into earning Bonus Rewards – we will be offering an updated method for buying out.

Within the new Event UI, an option will be presented that allows you to purchase the remaining progress that you need, for a scaling amount of Zen. The base price for this service will be 6,000 Zen, but every single Progress Point that you earn will reduce that price on a percentage basis. Thus, if you have already earned 600 Progress Points (half of the 1200 required), this price will be reduced for you down to 3,000 Zen. The more you play, the cheaper the Buyout Option becomes, dynamically!

Once the Mycelial Crisis Event has ended, your opportunity to earn Progress Points will have passed. However, the new Event System will store the progress that you made long after the Event has expired. Based on this stored progress, the option to Buyout the rewards will remain available through a new “Second Chance” interface. The price for this buyout is the same as what is offered while the Event is active, and scales in the same manner based on your amount of Progress Points accrued.

For more details on the Content and other offerings being released with Season 18: Awakening, please stay tuned for additional Dev Blogs!