Jayce's Interstellar: The State of the Romulan Navy The whirlwind of military activity in the previous year caused severe strains on virtually all the major powers of the Alpha and Beta Quadrants, but perhaps no single major power was as put upon as the Romulan Republic Navy (R.R.N.). “At the start of 2410, we were just a militia,” said Admiral Kerekek of the R.R.N. “Now we’re a fully fledged military organization dedicated to defending Republic space.”

The fledgling Romulan Republic still trails behind its counterparts in the Federation or Klingon Empire in raw resources, especially in the wake of the Iconian War which devastated New Romulus itself.

“The fact the Iconians had an apparent strong drive to destroy the Romulan people first resulted in much chaos to our supply lines and infrastructure. We essentially took a huge step backwards,” Kerekek said.

New Romulus in particular took a significant front blow from the Iconians’ near extermination of the galaxy. The new capital city of the planet was essentially melted into scrap and much of the surrounding terrain burned to the ground or smashed into craters.

“We’ve done a fair amount of rebuilding, but essentially, we’re rebuilding what we just built the previous year,” said Subcommander Nadel of the Republic Navy. “There’s nothing we can do about that. But it has resulted in a large number of our population leaving Mol’Rihan to rebuild colonies throughout Tau Dewa.”

While sizable chunks of the Republic infrastructure were destroyed, no one was hit harder than small colonies or the Republic’s military. The R.R.N. has spent significant resources rebuilding its fleet, with a focus on numbers of ships. Fortunately, for the Republic, it has been able to recoup its personnel losses as more former Imperial colonies defect to the Republic alongside Imperial defectors. As Imperial elites and the Tal Shiar struggle for Sela’s throne, much of the Romulan Star Navy and even several fleets of Tal Shiar vessels have switched sides, believing their leadership in the Empire has lost sight of what it means to rule. According to statements from Republic Intelligence, Tal Shiar defectors in particular describe a fragmented order in the Empire, with no true leadership in charge of the Tal Shiar. The death of Colonel Hakeev, who had managed to unify the various Tal Shiar sects under his banner, managed to create a similar situation to the Romulan Senate where powerplays for control are played out from General to General.

“The reports from defectors continuously show that Imperial leadership cannot maintain the loyalty of their men,” said Kerekek. “We repeatedly hear the same stories of defectors who have no love for our democracy, but that they look at Imperial leaders and concluded that the nobility of the Empire have lost their ability to lead. But their loss is our gain.”

Its estimated that 65% of Imperial forces that were engaged in open hostilities with the Republic have defected to the same Republic since the end of the Iconian War, and with them came several key systems specializing in starship construction and repair along with several mining and agrarian colonies. But despite these huge gains, the materiel gains of the Republic are still high.

“Troops we have,” Kerekek said. “Ships we need.” 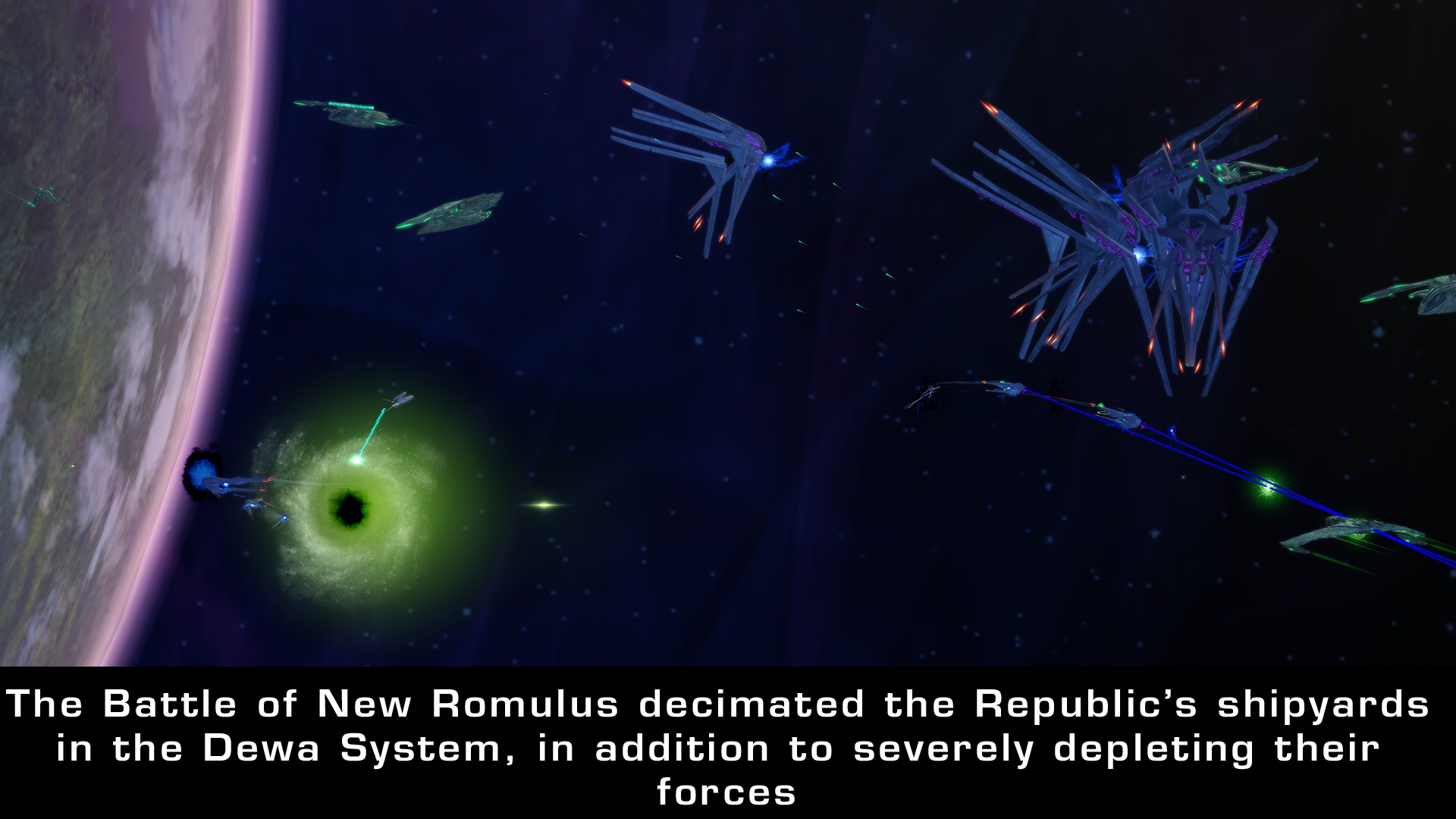 The Republic lost its primary shipyard at Dewa IV when the Iconians assaulted the Dewa System in late May. As such much of the Republic’s current forces consist of ships that were already in circulation before the war began, were on the prototype lineup, or were brought from Imperial defectors. With a need for more construction, the Republic turned to its allies in the Federation and Klingon Empire to loan stardocks for construction, however, many of these agreements have dried up in the days following the Hurq Conflict.

“There wasn’t a choice in that matter,” said Admiral Jorel Quinn of Earth Spacedock. “The Republic may need ships but between the Iconians and the Hurq, the Federation’s fleet is critically low. The Empire isn’t much better having taken a significant brunt in the Iconian War and having been severely depleted in our own wars between each other in the last decade. The Republic, while having fewer ships, simply has to make do.”

Military analysts generally agree that the forces of the Alliance have largely been whittled down and presently are dependent on ships that avoided the Hurq conflict to defend their borders.

Fortunately for the Republic, they have two major assets at their disposal: captured Imperial Shipyards and the Solanae Dyson Sphere. Imperial Shipyards at Tephrei, Terrh, Chaltok, Aido, and the Sarita systems have all defected to the Romulan Republic in the past year.

As for the Solonae Dyson Sphere, it was quickly discovered by allied forces that the sphere possessed advanced industrial construction facilities. Early attempts to use these facilities resulted in the Solanae, Nov, and Aves-class Dyson Science Destroyers and their later, more advanced counterparts. However, as yard resources became increasingly scarce, the Republic began using the automated facilities more liberally. “There was really no choice,” Kerekek said. “The existing captured Imperial Shipyards had plenty of older hull designs waiting to be completed such as the D’deridex or Mogai, but we needed to push newer design lineages. Newer docks near New Romulus are still limited, so mass production needed existing automated facilities.”

Despite this, the Solanae Sphere, while capable of producing a full-sized warbird in under a month, still requires outside resources that the Republic is struggling to acquire.

“Let’s just say using Solanae materials to construct a traditional singularity core without adjusting for their composition does not end well,” Kerekek said. “We have to haul our materials to the sphere, which slows down production. Still, it’s a net gain; we’re pumping out ships faster than we could the old fashioned way.”

Despite these setbacks, the Republic estimates its fleet will be at full power once again by mid-2411, assuming no extended or aggressive conflicts ensue in the coming months.

“For the first time ever, the Republic knows peace,” Nadel said. “This gives us a chance to lick our wounds and rebuild. Infrastructure and agricultural needs have been our primary goals in the past six months, but we have taken the opportunity to do some R&D.”

The majority of the R&D in question has involved joint construction operations such as the oversight on the allied escorts spearheaded by the Caitians, Ferasans, and Remans earlier this year or contributing engineering research on the hulls recovered from Yard 39.

“We learned a lot from our allies and we think we can start applying their design knowledge into our new starship classes.” Kerekek said. “The recently launched Kholhr is a good example of that. Honestly – the Romulan designs, no matter how classic, are some of the most technologically advanced in the universe. And we imagine demand for them will increase – significantly – soon.”