The Voth Evolve in the Infinity Lock Box! 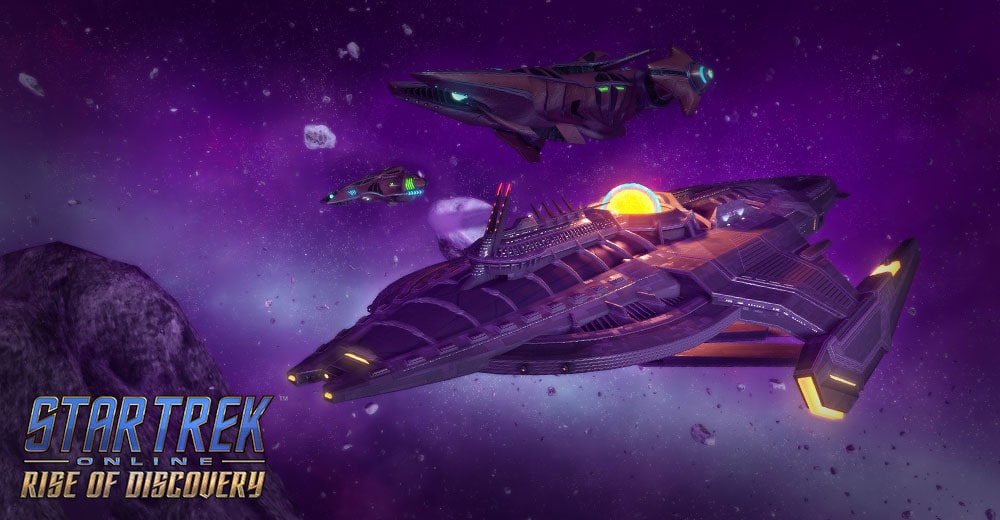 The Infinity Lock Box, containing prizes from nearly all previously-retired Lock Boxes, will be available again for an appearance beginning on PC on August 8th and on Xbox One and PlayStation 4 in September. During this time, enemies defeated on both Ground and Space maps will have a small chance of dropping one of these prize-filled packages.

This run of the Infinity Lock Box will feature the addition of the Emperor’s Lockbox contents, Tier 6 versions of the Voth Flight-Deck Cruiser and Voth Science Vessel, and more! Continue reading further on for the full details on these new and updated starships!

Along with the upgraded starships and all of the prizes offered in previous appearances of the Infinity Lock Box, additional prizes originally seen in the Emperor’s Lock Box have been added to the rewards! They now include all of the following:

Voth vessels have exceptional defense capabilities, as the Voth take great precautions to ensure the survivability of their ships and crew. Their immense size and sturdy construction allows these vessels to be fearsome opponents in combat, even when cornered without backup.

For more on these exciting updated starships, keep reading!

The Rampart Command Flight Deck Carrier is one of the leading soldier vessels of the Voth's expeditionary force. They are well-equipped to handle just about any situation that comes their way, and come with two fully-operational hangar bays for launching fighters or support craft to aid them in combat.

This console drastically augments the potency of your shield emitters for a short period of time. During this time, your shield facings become invulnerable to energy damage and reflect all incoming energy-based attacks. These circuits can handle only a limited amount of strain from incoming fire before the immunity will collapse and your shields return to normal.

This console additionally provides a passive boost to Auxiliary Power and Starship Structural Integrity. It may be equipped in any console slot on any Voth ship.  You may only equip one of these consoles.

The Voth Rampart comes standard with two hangar bays of Voth Heavy Fighters, and unlocks the purchase of more Voth Heavy Fighters pets, including the upgraded versions. These deadly pets come equipped with Voth Antiproton Beams and a Voth Transphasic Chroniton Torpedo, and use Emergency Power to Shields and Emergency Power to Weapons. They can be equipped on any Voth Starship.

The Bastille Temporal Science Vessel boasts enhanced scientific capabilities, having first been designed for use as a combination exploration and research vessel. Despite being focused on the gathering of knowledge, this ship design is still fully capable of defending itself in a direct confrontation.

This console additionally provides a passive boost to Starship Drain Expertise and Shield Capacity. It may be equipped in any console slot on any Voth ship.  You may only equip one of these consoles.

While this trait is slotted, when you decloak or activate Emergency Power to Shields, you will gain a boost to your maximum shield capacity, and to your Drain Expertise and Particle Generators stats.

This three piece set includes the consoles from either Voth Flight Deck Cruiser, either Voth Science Vessel, and the Voth Bulwark Dreadnought Cruiser.