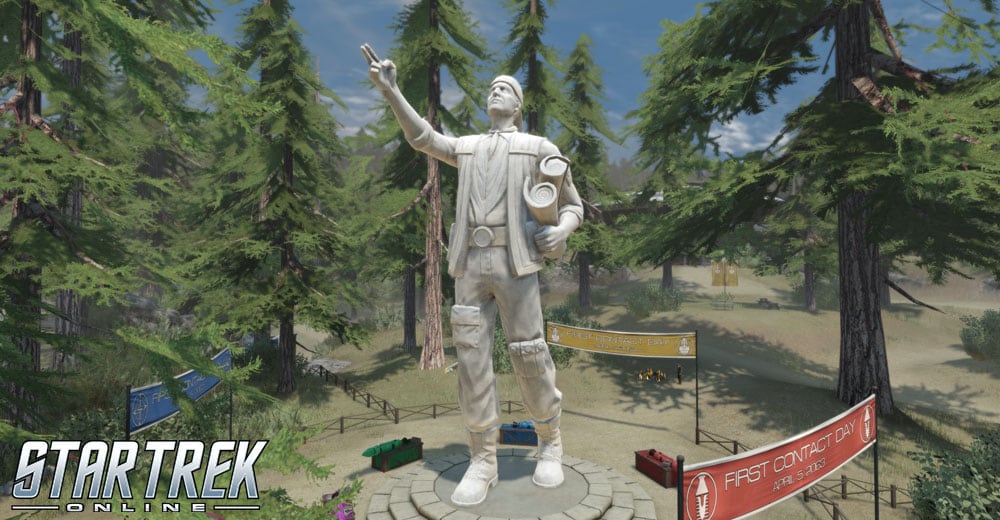 Captains of level 10 and above may participate in this event—even captains from the Klingon Defense Force, Romulan Republic, and the Dominion are welcome to join these festivities, as a celebration of diversity and the meeting of different species.

When you complete the queue for the First Contact Day event, you will receive a special Zefram Cochrane Memorial Hologram Voucher (limit one per day, per character). A minimum of 4 Holograms are required in order to receive a Special Event Prize Box that includes:

Archaic weaponry of this type has seen a curious resurgence via the popularity of a number of holonovels that depict ancient periods of Earth's violent history. This particular weapon has something of a cult following among avid fans of the "Dixon Hill" holonovel series which rose to prominence after the publishing of an unauthorized biography of the Starfleet career of a former captain of the U.S.S. Enterprise-D, Jean-Luc Picard.

Though only a replica, this item has (perhaps unwisely) been fully modified to act as a corollary to modern weaponry, and may be used effectively in modern combat scenarios. It features multiple fully automatic firing modes.

We hope to see you all in Bozeman to once more celebrate one of the most defining moments in the history of the galaxy we live in!