Welcome to the Age of Discovery 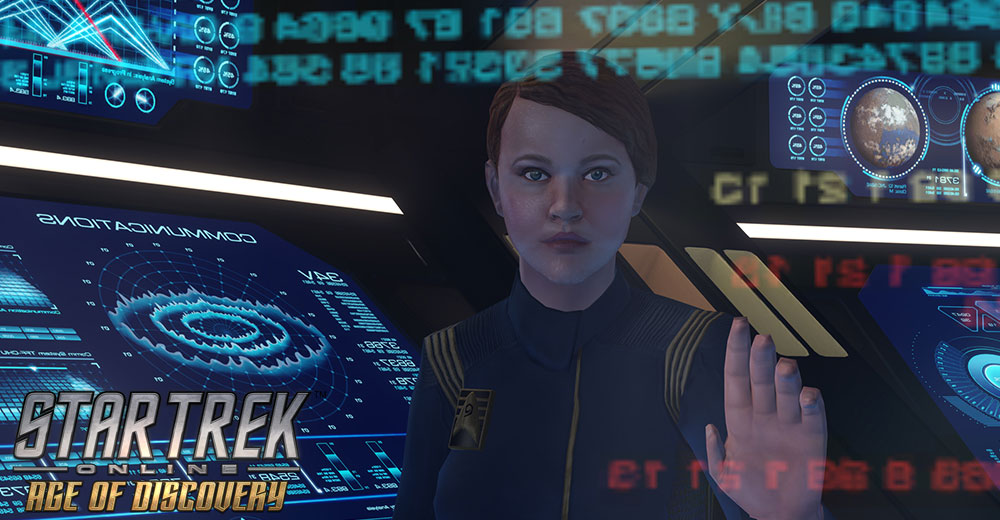 Captains, welcome to Age of Discovery!  This is a landmark event for Star Trek Online as it marks the first time that the game has run in parallel with a live Trek television show.  We are already experiencing fantastic new synergies collaborating closely with CBS and the show writers.  Captains will experience this right away in a reimagined Federation starting experience working alongside Cadet Sylvia Tilly (voiced by Discovery's Mary Wiseman) as players set out on epic, multi-release adventures.

In AoD’s maiden voyage, players will journey to iconic locations from Star Trek: Discovery, exploring the depths of the Dilithium Mines of Corvan II, boarding the new experimental Crossfield class starship, the U.S.S. Glenn, and defending Starbase 1 from a fearsome attack by the Klingon House of D’Ghor.  Captains will also come face to face with the vicious J'Ula, matriarch of the House of Mo'Kai and sister of T'Kuvma who will stop at nothing to reunite the Klingon Empire.

This however is just the beginning in Age of Discovery.  Multiplayer missions, formerly known as “Queues” have been expanded and rebranded as Task Force Operations (TFO).  This change is certainly not in name only.  Throughout AoD, we will be introducing exciting new TFOs that advance the narrative, while remastering and recreating others.  This kicks off with the all-new TFO, Defense of Starbase 1, followed shortly thereafter by our first Featured Task Force Operation – Battle at the Binary Stars.  In this new 3-Week Event, players will have an opportunity to earn exclusive rewards fighting side-by-side with fellow captains in one of the most important battles in Federation history.

Additionally, Task Force Operations introduce a new engagement feature, which offers captains big bonus payouts for supporting other players by joining Random TFOs.  This new Random TFO feature further ensures that all captains will easily find groups to experience all the diverse TFO content in the game.  Is there is particular TFO that you have never played or have trouble finding groups for?  We've got you covered here as well.  Select the Task Force Operation that you want to play and it will be quickly filled by other players seeking out the Random TFO bonuses!  Stay tuned, as there is much more in the works for this evolving feature.

We’ve also completely overhauled the Mission Journal.  Careful handling has gone into this undertaking, ensuring that our very best stories are presented to players early in the leveling experience.  Some episodes have or will be undergoing a remastering process while others have become optional.  Another big change here is the removal of level requirements.  With the exception of certain pivotal episodes (for training and continuity purposes), players will no longer be level gated in the experience.  Captains will also notice that many previously gated Task Force Operations are now unlocked while leveling.  This gives newer players greater access to play with friends, get a taste of the end game experience and a huge head start on Reputation Marks.

And speaking of Reputations, this system has been expanded in Age of Discovery as well.  All current reputations have been raised to Tier 6!  There are fantastic rewards to be found here including, improved reputation traits, damage improvements for reputation weaponry, Fleet Ship Modules, vanity materials, account-wide reputation gear discounts and much more.

In short, building this first installment in Age of Discovery and working with Mary Wiseman has been an amazing experience for our development team.  Additionally, we want to thank you for all the great feedback and continued support!   While we have many more stories and features planned in the coming months, we are thrilled to be launching Age of Discovery: Part 1!  Thank you again and we look forward to seeing you in game very soon!