"The Will to Fight" 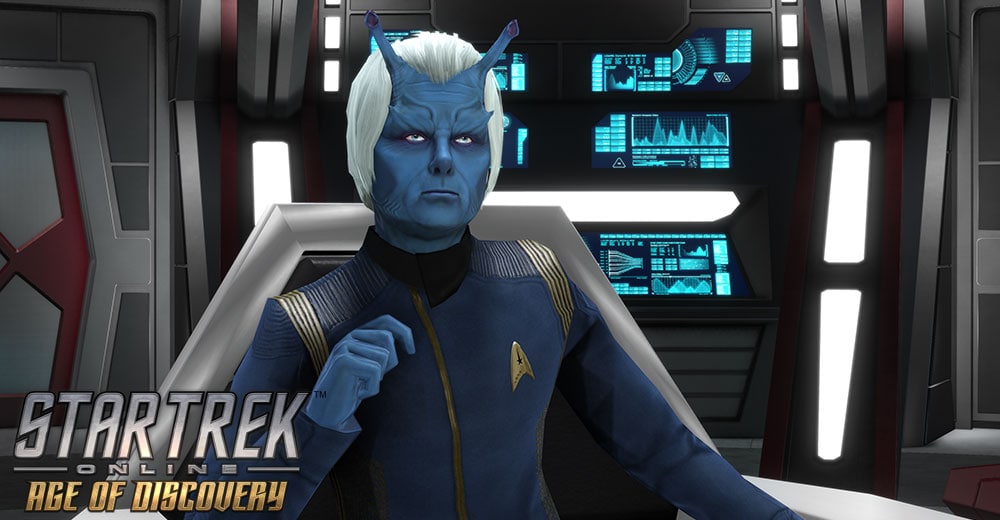 Captain Thy’kir Shran lifted his finger from a button on the terminal in his ready room. He had come in here to record his thoughts as the U.S.S. Sebrova cruised at high warp toward their latest objective. These were momentous times, dangerous times, and he felt that they deserved to be chronicled.

But he wasn’t sure where to begin.

The peaceful exploratory mission Starfleet had offered him when he donned the uniform was no longer a priority. Across Starfleet, science vessels and starships built for exploration were being retrofitted for combat—the Sebrova included. All because of the Klingons’ attacks at the Battle of the Binary Stars. While he and the Sebrova weren’t present at the battle, he found it surreal to hear the news of the tragedy for two reasons: One, because of the Klingons’ sudden and unexpected savagery and two, because among the Federation’s losses was a ship named after his own great-grandfather, the legendary Andorian war hero Thy’lek Shran. He remembered touring the vessel not long after being named Captain of the Sebrova. He found it strangely gratifying touring the U.S.S. Shran, being treated with respect and honor based on his blood relation to a revered warrior he’d never met.

This was not the galaxy Thy’lek Shran left behind, Thy’kir mused. He placed his finger back on the terminal and took a breath, his antennae twitching atop his head, seemingly searching the room for inspiration.

“The Sebrova is making good time toward her objective. We’ve been asked to determine the status of U.S.S. Ticonderoga, last known to be operating in this sector of space. It’s not like Captain Durant to miss routine check-in reports to Starfleet Command. If the Ticonderoga has fallen to Klingon attack, we need to know, immediately.”

Shifting gears, he continued.  “The crew is becoming war-weary, but they are fighting with vigor and honor, and this ship continues to shine in battle, with minimal scars to show for it.”

Thy’kir paused. A status update? Is that what this update’s about? He’d listened to a collection of Thy’lek Shran’s logs and speeches to the exalted crew of the Kumari. Thy’kir’s ancestor was not an orator, or really a man inclined to give orders, but he fought like a wild sehlat, and when thrust into leadership, he conquered that role like he conquered every other obstacle he faced. He survived war with Vulcan and Romulus, and he defeated his own prejudices to play a central role in the foundation of the Federation.

Generations later, Thy’kir Shran was a captain in service to the Federation his ancestor helped create. And yet, for all the advancement his family had seen, the galaxy was as dangerous as ever.

He pressed the button again, and he leaned in toward his terminal. His antennae curled forward, as if trying to listen.

“I find myself thinking of my great-grandfather, who fought both against and alongside the legendary Captain Jonathan Archer in the days before the Federation was born. For a young Andorian, my ancestor’s writings and recordings are required media. Tales of massive battles and last-minute innovations, of sacrifices and friendships in the blackness of space, all show us that the Andorian officers of his time were hard men and women, prepared for battle, and ready to fight, and claw, and tear for every inch they could get against the enemy. As a people, we weren’t known for retrospection; my ancestor is revered as a man of action, capable of choosing the right side and laying his life on the line to see that side win.”

Captain Shran reached up to scratch at the base of an antenna, a nervous habit he’d gained in his first days at Starfleet Academy, when he was one of the very few there with skin the color of Earth’s sky, and when everything he did was shrouded in his great-grandfather’s shadow. Unlike the Shran of legend, Thy’kir sought to excel through study, planning, and preparation, and he worried that his ancestor’s pugnacious past might stunt his advancement. To an extent, he was right, but he found that by settling in, spotting an objective, and stubbornly setting course for every opportunity, he could see a path to the hallowed Captain’s chair. He was disappointed, at first, to realize that the stubborn refusal to fail that propelled him forward in Starfleet was the same that led his ancestor to victory in battle.

His antennae curled backward as he reflected on this. His ancestor faced horrific odds against vicious foes… but he wondered how his great-grandfather would approach the current threat facing Starfleet now: the constant terror of Klingon fleets suddenly materializing out of nowhere, destroying Federation ships before they could even enter Red Alert.

“My ancestor fought battles with honor, and his opponents responded in kind,” he said, leaning back in toward his terminal. “My crew and I grew up with tales of stacked odds, fleets facing off against each other, the whine of a focused phaser and the ominous glow of a loosed torpedo. Those of us who knew of the Klingons from our training understood them to be honorable warriors, holding a tradition of bravery and—I daresay—sportsmanlike combat. Many of us were excited at the chance to meet the Klingons, not necessarily in battle, but to learn more about them in person.” Thy’kir’s antennae turned inward and then leaned forward once more. “But those are not the Klingons we face today.”

He sighed, glancing out the window at the streaks of stellar light illuminating the ship at warp. “These cowardly slugs hide in the darkness, waiting to leap out at their unwary prey. The game of the hunt is nonexistent. There’s only peace, then death, and then a darker peace left behind.”

The Sebrova’s mission was to investigate the fate of the Ticonderoga, but the recent days have proven that the Klingons were hunting civilian vessels in this sector as well as those of Starfleet. Traders and travelers peacefully moving through space, struck down by cowardly scavengers likely terrified of a stand-up fight. Captain Shran’s ancestor would have spit and cursed them, if he could meet them face-to-face, but these enemies kill without the courtesy of introductions. You’re safe, you’re whole, and boom, you’re dead.

“Our mission is one of mercy, to provide a deterrent against these brazen raids on civilian traders and to protect and rescue any ship that comes under Klingon attack. But…” He took a moment, then shook his head. “This mission is a farce. We can no more protect these vessels than we can protect ourselves—and you can ask about the fate of the starship named after my family to see how that can go.” He felt his face wrinkle, his antennae stand straight and outward, alert. “We cannot fight an enemy we cannot see. And all the legendary ancestors and retrofitted exploration ships in the fleet cannot make the invisible visible!”

As he said this, his gaze fell upon a model on the shelf next to his ready room door: A gold-plated replica of the Kumari, the ship in which Commander Thy’lek Shran overcame the Vulcans, the Xindi, and his own prejudices to become a hero revered by three starfaring civilizations. He always felt emotional when he looked at this ship, and this time, the emotion was shame.

His antennae leaned downward as he returned his attention to the terminal. “The Sebrova and her crew will do all we can to combat the Klingon menace. We will see this mission through, no matter the difficulty. We are a fleet of scientists and explorers wearing the armor of warriors. If there is a way to defeat the Klingons’ cloaks, we will find it.”

At that moment, his ready room door slid open, and his First Officer stepped in. “Sir, we’re nearing the objective… and we’re picking up a Starfleet distress call not far from the target sector.”

“Which vessel,” he replied.  “Is it Ticonderoga?”

“No, sir,” his officer said.  “It’s from a vessel assigned to Starfleet Academy.  She’s on a cadet training cruise, Captain.”

Captain Shran looked up from his terminal and nodded. Cadets. They’re attacking cadets now. The Klingon dishonor knows no bounds.  “Plot a course to the signal’s source, Commander.  Maximum warp.”

The First Officer nodded, “Aye, sir,” and turned to give the order. Captain Shran pressed the terminal’s button one more time, and leaned forward.

“This is not the galaxy my ancestor left behind,” he said, his antennae twisting as if searching for the right thought. “This is the galaxy we have, now. And now we sail forth, to pierce the darkness, to banish the ghosts, to slay the beast. We have chosen the right side of history,” he said, “And we will do what we must to see that side win.”

He rose and stepped away from his desk, the terminal’s log window closing as he stood. As he approached the door to the bridge, his glance caught the shine from the model Kumari once more.

He paused in reflection for just one more moment, before he heard the klaxons from the bridge, announcing a yellow alert.

“We’ll save this one, too, Commander Shran,” he said, and he charged onto the bridge to make his ancestor proud.

Accelerate Your Reputation!
Starting later this week, Captains on PC will be able to accelerate any reputation to Tier 5!
Read more
Ships of the Line: Nebula Bundle!
The second Ships of the Line Bundle is coming next week, and it's all about the Nebula Class - and all ships in this line have been redone with beautiful new visuals!
Read more
PC Patch Notes for 9/17/20
Check out all the exciting changes coming to Star Trek Online in our latest patch notes!
Read more