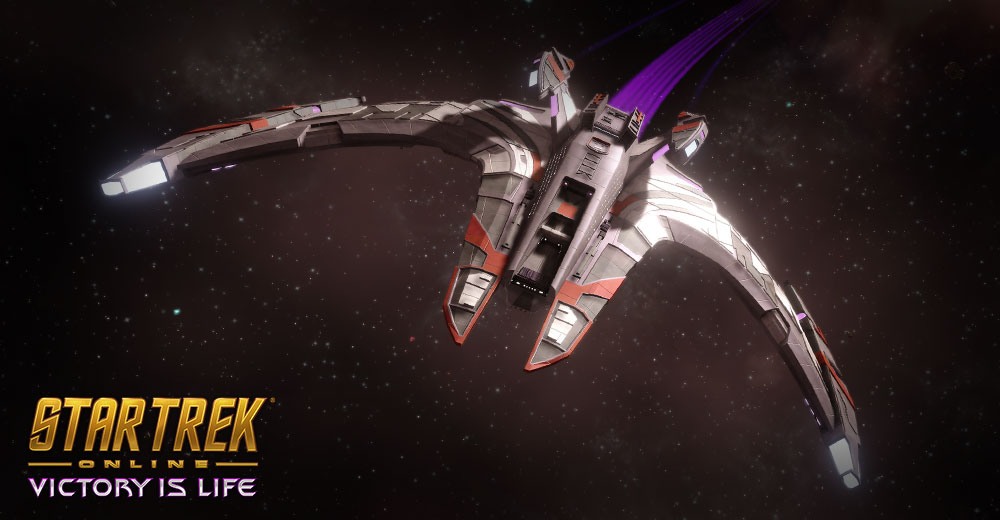 The Ferengi have seen the return of the Dominion, Odo, and the Hur’q as the opportunity of a lifetime. Using Gamma Quadrant supplies and Ferenginar’s own munitions factories, they have come presenting a medley of new armaments for the Alliance’s disposal. Not surprisingly, the Lobi Consortium has also joined in this cause and brought the fruits of their endeavors.

The Deep Space Nine Lock Box’s Grand Prize is the Jem'Hadar Light Battlecruiser [T6]. This commanding vessel was originally seen as one of the primary vessels present in the adversary fleets that assaulted the Alpha and Beta Quadrants during the Dominion War. After the events that led to the disappearance of an enormous Dominion fleet, derelict vessels of this type were periodically spotted near Bajoran and Cardassian space over the subsequent decades. These ships have all been refitted and brought up to modern standards in preparation for use by the allied forces of the Milky Way.

Activating your Personal Wormhole Generator allows you to travel great distances very quickly while untargetable and invisible for a very brief time. While in the wormhole you will regain Hull Hit points over time. Upon exiting the wormhole, you will gain a potent damage buff.

The involvement of the Ferengi has also attracted the Lobi Consortium, who will allow Captains to purchase the Maquis Raider [T6] from the Lobi Store. Although the Maquis resistance was short-lived, this fierce group of independent rebels left an indelible mark on the history of the region of space along the Cardassian-Federation border, and beyond.

The Maquis Raider [T6] comes with an all new Universal Console, the Plasma Storm Module.

Activating this ability will create a massive plasma storm, similar to the Badlands Cyclones, at your target's location. The plasma storm deals plasma damage and pulls enemies into its center while drastically slowing their flight speed.

Additionally the Maquis Raider is fitted with the latest experimental weaponry option, the Phlogiston Projector.

A few clever Maquis sometimes referred to the exotic gasses of the Badlands by the nickname of "Phlogiston" -- an archaic element believed by 18th-century Earth scientists to be the source of combustion. Although scientifically inaccurate, the term stuck around as a sort of slang. This experimental weapon emits an oxygen-rich mixture of these gaseous elements harvested from the Badlands plasma fields, and ignites them. This violent reaction briefly burns at temperatures comparable to solar ejections, causing structural damage to even the hardiest of starships.

A special console based entirely on the principles of the Ferengi Alliance can also be acquired from the Deep Space Nine Lock Box: the Hostile Acquisition Universal Console. This console allows the user to conduct a routine inspection on a nearby vessel. The vessel is immobilized while the inspection is taking place; in the inevitable event that something of a devious nature is found, the inspection team is instructed to cause as much significant systems damage as possible. Usually this results in reduced outgoing damage, resistances and flight speed. Additionally, users of this console will tend to find stray GPL in the wreckage of their enemies.

The Deep Space Nine Lock Box will also feature new Space and Ground weapons within the Ferenginar Plasma Weapons Pack. This box contains Ferenginar Plasma versions of all standard space weapon types, as well as ground pistol and rifles. Additionally the weapon pack will have a chance to drop an Omni-Directional Ferenginar Plasma Beam Array or Wide-Arc Ferenginar Plasma Dual Heavy Cannons. That’s not all – lucky captains might also receive a Ferengi Vanity Shield from this pack! This vanity shield can be equipped in a ship’s vanity shield slot to gain the visual look of a Ferengi starship.

All Ferenginar Plasma weapons have a chance to apply:

New Personal Traits are also available within the Deep Space Nine Lock Box. They are universal and available to all species.

With every opening of a Deep Space Nine Lock Box, there is a chance at receiving a box that contains one of the following bridge officers:

The Lobi Store will be receiving a ground set themed around the Tosk Hunters:

The Instruments of Pursuit

This energy crossbow was designed for the hunt, and use against any adversaries trying to prevent the user from doing so. Capable of destabilizing shields and penetrating even the most resilient armors, the user of this weapon will find very little that can match its utility.

This armor was designed with the Tosk Hunt in mind; increased mobility, heavy resistances, and personal deflector integration make the wearer of this armor a master pursuant.

(Diminishes with distance to current target)

(Activating again within 15 sec teleports to the marker)

The Instruments of Pursuit Set Bonuses:

The Lobi Store will also be receiving some new outfits.

Equip yourself with an outfit that resembles the attire of a particular Ferengi entrepreneur seen around Deep Space Nine.

Equip yourself with an outfit that resembles the attire of the Grand Nagus, the Ferengi Alliance leader. This is, of course, simply a replica.

There are many other prizes within the Deep Space Nine Lock Box for players to acquire, such as R&D Packs, Boosts, and other assorted items.

The Deep Space Nine Lock Box, as well as the additional Lobi Store entries, will be coming to you with the Victory is Life Expansion!