"The Redemption of the Steadfast" 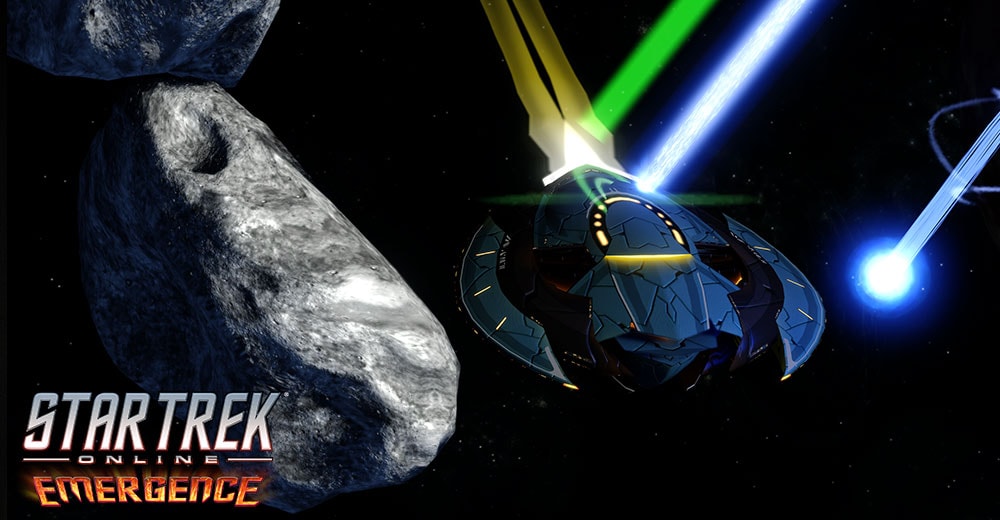 “Admiral, the Steadfast is heading towards Federation space. Estimated trajectory would have them arrive at Izar in a little over two days.”

“So, have they abandoned their mission?” Admiral Tzen-Tarrak asked.

“Yes, sir. Their assigned systems are all returning positive scans. No Drantzuli purges have taken place in any of them.”

“Have Commander Neth Parr assemble a team to intercept the Steadfast. Give her the prototype. And tell them not to let Captain Tzen-Crinnu’s noble blood slow them down,” The admiral practically spat out the traitorous captain’s name.  “As of this moment, he is an enemy of the state, and will be dealt with as such. If I had my way, he’d be strapped to a protomatter bomb at the next Drantzuli purge.”

“Y-yes, sir,” the startled adjutant replied. “I’ll let her know, Admiral - at once!”

Commander Neth Parr flew to intercept the Steadfast with a team of four fighters. The target was in sight with only a few hours to spare before entering Federation space.  She hit the group comms channel and addressed her wingmates.

“Listen up,” she said briskly. “If it comes down to it, we need to take Steadfast in open space.  This is a Tzenkethi matter. Taking down a traitor is none of the Federation’s concern.”

“Understood, Commander,” came the reply from Tashan, her lieutenant.  “They won’t make it to Fed space.”

“We can’t let Tzen-Crinnu seek political asylum, either,” Parr replied.  “We’d lose the ship and every traitor on it to our former enemies. That is not an acceptable outcome.”

“Ugh,” Tashan said, cringing.  “The Old Man would have us on deep space latrine duty forever if that happened.”

Neth smiled slightly.  “You’re assuming we’d live long enough to stand tall before the man,” she replied.  “I suspect the Autarch would have us shot on general principles if that happened.”

Sensor alerts brought the pilots out of their conversation.  “Combat alert,” Neth ordered.  “Weapons at the ready.   I’m going to hail them.”

As her wingmates indicated compliance with her orders, Neth hailed the rogue vessel.  Let’s see if they’re willing to walk the Path of Reason.

“C.S.S. Steadfast, this is Commander Neth Parr,” Neth said with precise military cadence. “I speak with the authority of the Autarch and the Admiralty. Stand down, immediately.”

Two fighters moved into position to flank the Steadfast on either side.  Nothing but static came from the Steadfast.

“They’re not responding,” Neth said, disappointed.  “So be it. Take their shields down.” Neth’s heart raced – combat against a capital ship was no laughing matter.

The fighters opened fire. They were small and nimble compared to the Steadfast, but the larger ship was far from defenseless. One of her wingmates managed to shout defiantly before his fighter was annihilated by concentrated fire from the rogue vessel.  Neth avoided the debris cloud and sent an alpha strike toward the enemy, smiling grimly as the barrage caused the ship’s port shield to drop.

Radio silence fell after that. The remaining fighters continued their evasive maneuvers, drawing fire from the Steadfast as the tiny torpedo loaded with protomatter streaked towards the traitor’s ship.

Breathe, Neth had to remind herself. Trust in the weapon, and its designers.

And then a familiar reddish hue engulfed the ship. The Steadfast stopped firing. Within moments, the protomatter reaction ended.

The fighters repositioned themselves around the ship.

Neth took in a deep breath and exhaled. “All right. We’re going in. Prepare for boarding action. Let’s get this over with.”

The pilots moved with precision onto the Steadfast’s bridge. Tricorder scans returned the same data as with previous decks – no signs of life save their own.  Drone packs lay next to shoulder cannons and holstered sidearms. Near the captain’s seat, a metal piece bearing the Tzen-Crinnu crest rested on the floor. Apart from the occasional tone or alert from automated systems, the bridge was as quiet as the grave.

“Tashan,” Neth’s voice boomed eerily on the bridge. Toning down her volume, she continued, “Secure the ship. Ensign Cru, bring the ship about once you have access to helm control. We’re taking her back to Tzenketh.”

Neth Parr sat gingerly in the captain’s chair. This is what happens when you walk the Path of the Traitor, she reminded herself.

“Congratulations, Captain,” Tashan said as he began to override security settings left by the previous crew.  “If the scuttlebutt’s true, you’ll be sitting in that chair for a long time to come.”

“You should know better than to listen to rumors,” Neth replied, though she’d heard the same stories herself.  “We still need to get Steadfast back to Tzenkethi space in one piece, remember?”

“Yes, ma’am,” Tashan said.  “We’ll have her back online and underway in less than an hour.”

If those rumors are true, I’ll serve with honor, she thought. But I’d rather earn a command through valor. Putting down a traitor on the Path of Madness to take the center seat feels… hollow.

With that, she tapped in a sequence on her tricorder and began to dictate her report to the Admiralty.

“Combat log, C.S.S. Steadfast, acting Captain Neth Parr reporting.  We have secured the vessel and eliminated her traitorous crew. The prototype torpedo was deployed with full success.  With some improvements to range and spread, the weapon should be our next big advancement.  It’ll bring a rapid end to this crusade.”

If only that were true, she thought as her team performed their duties in silence.  Why can I not help but think that the Autarch will find new threats to the Coalition to use the weapon on once we’ve removed the Drantzuli? Who will be the next target on our Path of Conquest?

She picked up a toolkit and moved to join the takeover effort.  A question for another day, she thought. A path yet to be followed.