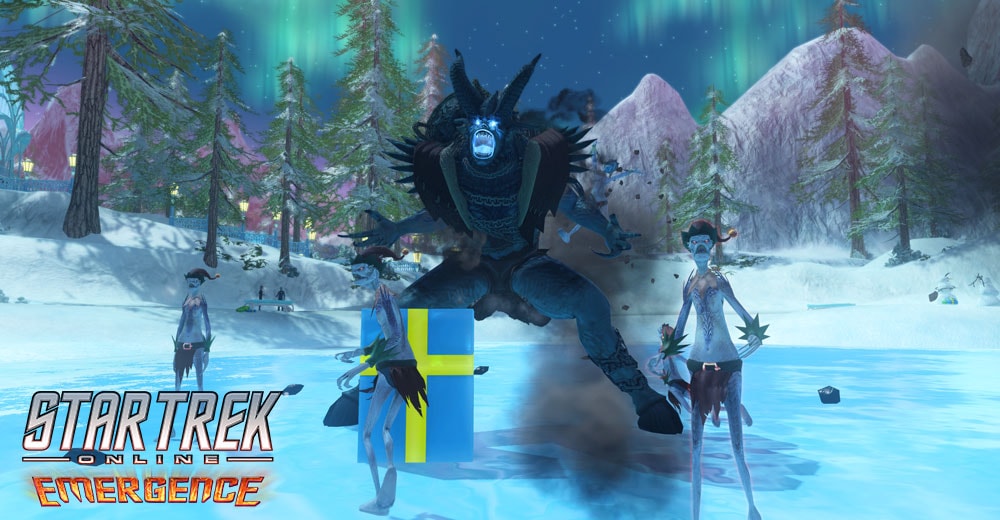 Come celebrate your winter holiday with Q in his magical wonderland - for the first time, the same Winter Event will be launching on the same day on all three platforms! From December 7th at 8am PT to January 18th at 10am PT, return to Q's Winter Wonderland!

This year, the almighty Q drew inspiration from ancient Earth folklore originating from a continent called “Europe.” In said folklore, a half-goat, half-demon figure would punish the naughty. He carried a bundle of birch branches to swat children with, as well a sack on his back reserved for those especially deserving of severe punishment and torture. His counterpart, “Saint Nicholas” would reward good children with sweets and presents, but this figure would give out coal. Naughty children whispered his name in fear... the Krampus!

That was a good start for Q, but the legend needed to be a little more dangerous. It had to scare children throughout the galaxy, not just Earth. After some consideration, he created the perfect holiday terror, a fusion of the Krampus and the demons of the Klingon Empire.  He created… the KRAMP’IHRI.

The Kramp’lhri can appear randomly throughout Q’s Winter Wonderland. A fan girl, the Kramp’lhri Watcher, lurks in the pavilion and tracks his movements. She will announce when the object of her idolization is near. Eager to see mortals pit themselves against the dark master, she can happily teleport you into the Kramp’lhri’s projected path.

Once the Kramp’lhri arrives with his loyal minions, stay out of range of his switch! If you anger him, he’ll try to kidnap you as well. Despite the risk, you must fight him, for as he weakens, he’ll lose his hold on the presents he’s stolen. Open those for a chance to find ornaments or free kidnapped Gingerbread folks.

Just when you think you’ve defeated the Kramp’lhri, he’ll turn into a cloud of coal and smoke and try to run to another spot in Winter Wonderland. FOLLOW HIM! Don’t let up on your attacks! The more times you can defeat him in the few minutes he’s active, the better your rewards will be. Perhaps you can even tame him and get him as a pet!

Are you ready to face Q’s newest challenge? Will you survive long enough to free kidnapped gingerbread folks? And who will be the true master of the Black Nanopulse Mek’leth? Are you ready to take on...