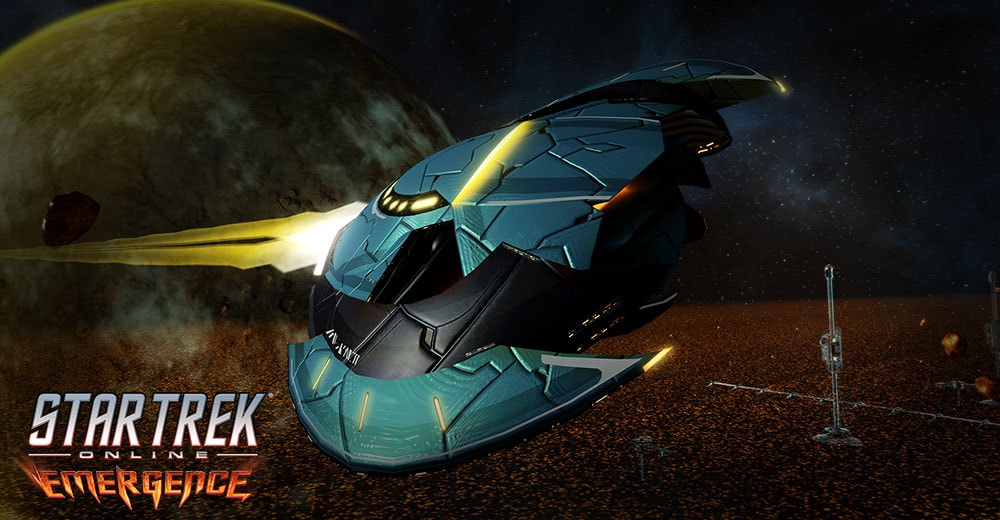 Since the emergence of the Tzenkethi and the mystery surrounding their fervent crusade, they have continued to exhibit design and tactic ingenuity the like of which the Alliance has yet to see. It is been in the best interest of the Alliance to continue pursuing new technologies as new dangers present themselves. The Tzenkethi harness shield power and distribution effortlessly. Their battle tactics indicated an admirable reliance on one another. This collectivism has allowed their technology to have situational strengths at the cost of weaknesses that can be offset while in larger groups.

The tireless efforts of the Alliance have now come to fruition. Tzenkethi design principles have been applied to construct new starships and technology to outfit our captains with. These captains will be able to experience the shielding superiority and tactical mobility of a Tzenkethi ship. Captains can also equip themselves with Diffusive Tetryon armaments to increase their shield optimization options. And, for those ambitious enough, genetic modifications are available to address Tzenkethi physicality and munitions that couldn’t be replicated with simple fabrication.

For Star Trek Online this lockbox includes a major influx of updated capabilities in the fields of shielding and maneuverability. Every piece is uniquely Tzenkethi, focusing on situational strengths and defenses. With this lockbox we have also included some enjoyable surprises. Such as…

To begin, the Tzenkethi Lock Box’s Grand Prize is the Tzenkethi Shuk-din Escort [T6], and as expected with Tzenkethi design, this ship is highly maneuverable with immense shielding capabilities for its size.

Coming equipped on the Shuk-din Escort is the Console – Universal – Peripheral Refraction Array. This console represents the current pinnacle of Tzenkethi shield technology, allowing the starship to massively increase their defensive capabilities along all non-Forward shield facings. The forward array is instead tuned to offense, increasing the damage dealt by the starship's weaponry against any foe within their forward-facing 90-degree arc.

Additionally the Shuk-din Escort is fitted with the latest experimental weaponry option, the Protomatter-Laced Sheller. Based on an original Tzenkethi design, the protomatter-laced payload it delivers is split between Kinetic and Radiation damage, and the damage it deals is increased against foes the closer they are to being directly in front of your ship. This weapon is capable of being fitted into any starship with an Experimental Weapon slot.

In a welcomed show of continued support the Lukari have contributed to this endeavor as well. Captains will be able to have a chance at winning a Lukari N’kaam Scout Ship [T5]. In the process of making the more state-of-the-art Ho'kuun vessel, the Lukari also experimented with smaller, lighter spacecraft. The N'kaam represents some of those earlier engineering explorations, and although not quite as impressive as it's big sisters, is still quite capable in its own right. Players who acquire this ship will be able to use its ship costume on the Lukari Ho’kuun [T6] as well.

As part of a deal with the Ferengi for their support in technological advancements, a Captain will be able to purchase the Tzenkethi Rhas’bej Battlecruiser [T6] from the Lobi Store.

The Rhas’bej Battlecruiser comes equipped with the Console – Universal – Momentum Manipulator. The inner workings of this technology are still a bit of a mystery, but it is said to replicate and redirect both kinetic and potential energy, in order to alter fundamental aspects of physics. Regardless of how it works, it has proven to be an effective weapon of choice for the Tzenkethi, allowing even their larger warships to suddenly execute maneuvers otherwise assumed impossible, while simultaneously boosting their weapons' destructive capabilities.

A special console based entirely on tried and true Tzenkethi strategies can also be acquired from the Tzenkethi Lock Box: The Console - Universal - Shared Processing Integration. Derived from the salvaged technology of their Broln’ta Cruisers, this console allows the user to activate a repair device that will heal the hulls of nearby allies, including the users, while simultaneously raising damage resistance. The effectiveness of the device depends on their distance from the user. This is largely due in part because of the nature of the technology. It uses both individuals’ power to more efficiently process repair protocols.

All Diffusive Tetryon weapons have a chance to apply:

New Personal Traits are also available within the Tzenkethi Lock Box. They are universal and available to all species.

Captains may also find Tzenkethi Kit Module packs. These Kit Modules are universal, and can be used by any class.

Creates a shockwave that deals Kinetic Damage, knocks up, and slows enemies. In addition, it leaves a debuff that reduces the target’s damage resistance rating vs melee attacks for a short duration.

Creates a fixed position point of volatile artificial gravity. This pulls in enemies and cripples their offensive, defensive, and mobility capabilities for a short duration.

For the first time ever, the Lobi Store will be receiving a ground set themed around the Tzenkethi, The Vranh’ko Quintessence.

This two-handed assault weapon is a retrofit design from one of the powerful one-handed Tzenkethi gauntlet weapons. Infused with protomatter technology, this tetryon weapon is capable of dealing sustained punishing damage. The primary fire is a fast firing flurry of tetryon bolts. While the secondary is a torrent of continual shots that increase in damage the longer the toggle is active. Consequently the strength it requires to sustain this onslaught also means that the user is increasingly slowed while the toggle is active as well.

This Personal Shield uses Tzenkethi shield technology to bolster its capacity to new heights. It also comes equipped with the ability to heavily strengthen flank angles in dire situations.

When taking damage while shields are below 50%:

(Only applies once per 30 sec) 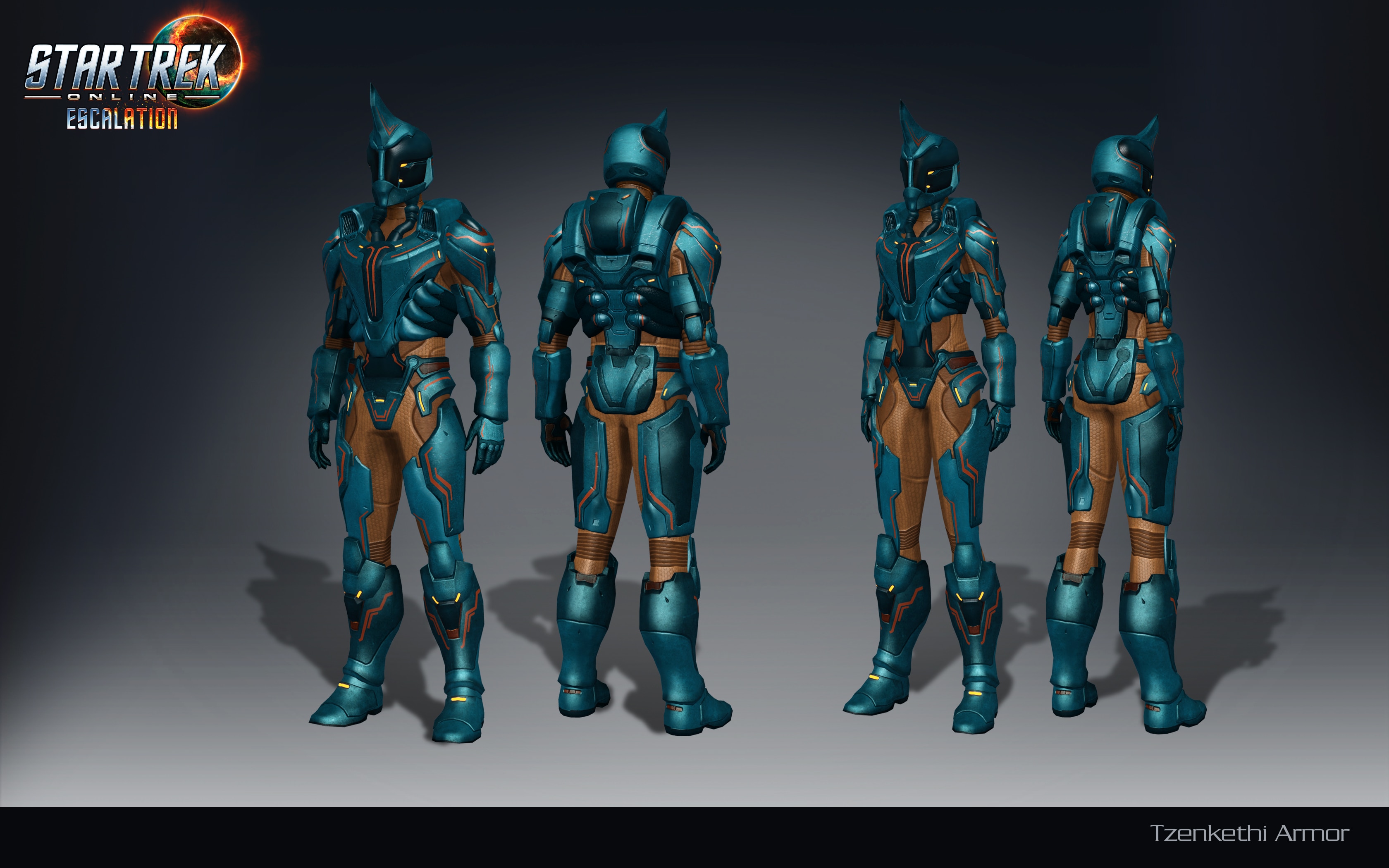 The Tzenkethi Retrofit Armor was made by scientists to replicate the fortitude and power of Tzenkethi personal armaments. The major hurdle was miniaturizing the Tzenkethi features to fit a more versatile selection of species. This armor also comes equipped with kinematic pneumatic actuators, which imbue the user with increased physical capabilities for a short period of time.

Charge the enemy and apply:

The Lobi Store also has a new set of Space equipment available for purchase, The Tzenkethi Resolve.

Tzenkethi designs might be unconventional but they have proven to be effective. This console follows the designs of biased configurations, allowing the user to increase their damage in their forward firing arc above all else.

There are many other prizes within the Tzenkethi Lock Box for players to acquire, such as R&D Packs, Boosts, and other assorted items.

The Tzenkethi Lock Box, as well as the additional Lobi Store entries, will be coming to PC with the Season 14 release.