When we started to review all the entries, we quickly realized this was going to be a big challenge. As Jeremy mentioned in the previous Dev Diary, there were a lot of fantastic entries. We were not just picking the next Federation ship - we were picking the next Enterprise. My mind flooded with mantras about "great power and responsibility," and "the needs of the many."

I remember after narrowing down the hundreds of entries, we put about 40 of so up on the corkboard. The first thing we did was call the biggest Trek geeks in the company, and asked everyone to pick a favorite. It seemed like just about everyone had a different favorite - oh boy, I thought, this is going to be hard. So we had to set some ground rules.

What made a ship an Enterprise? For me, it first had to fit the profile. It needed a saucer, two nacelles that pointed upwards, a deflector dish, and a distinct engineering hull (of all the Enterprises, only the NX class was missing a distinct engineering hull, but I let that slide). The ship also needed to look like a natural and logical progression. That is, what would the Federation build next? Ships are getting sleeker, the saucers are getting longer, sometimes pointier (think Voyager, Prometheus, and Rhode Island). It had to fit between the Enterprise E and the J. I remember one particular entry that looked beautiful, but it just looked too retro - almost like a next generation TOS Enterprise. Another criterion was that it needed to look distinct and recognizable. Each Enterprise fits the same basic formula, but each is instantly recognizable. There is certainly no confusing the Constitution, the Galaxy and Sovereign.

After we settled on criteria, the selection process got a little easier. We were able to narrow it down to about six. We started to vote, but everyone had a different favorite. Then we tried a point system and for some reason it seemed like everyone's favorite changed. To be honest, I always favored Adam Ihle's entry. It didn’t have all the details and angles of some of the other entries, but it met all my criteria. In my mind, I could see it as an Enterprise and imagine its flyby in the opening credits of some future Star Trek show. Eventually, we came to an agreement and then CBS had its final approval. They had some minor comments and suggestions of what they needed to see from the ship, but they were on board. We had our winners! 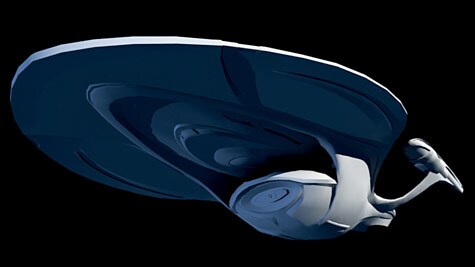 With the Art Team in the midst of wrapping up the final model, the focus has now turned to design. While we aren’t sharing final details just yet on what powers and abilities the Enterprise-F will have, we do plan on doing a big reveal in the game. It is, after all, the Enterprise, and she deserves all the pomp and circumstance we can afford. Watch for more details coming soon.

I am sure a lot of you want to know what the ship is going to play like. Well, first and foremost, it will be a cruiser. We’re not sure if it's more of a Star Cruiser, Assault cruiser, or something else (it will use existing skills, so it won't require a new skill to put points into). We want the ship to be big: bigger than the Sovereign and even a little bigger than what we find in Ihle's concept. There was talk about making this a Federation Carrier. We seriously considered that, but we knew that just didn’t feel right for an Enterprise. The next flagship of the Federation could not be carrier whose focus would be so dedicated to war.

The Enterprise-F will likely be a Vice Admiral ship. We’re working on finding an appropriate BOff seating assignment for the ship that’s unique and desirable, but not too over-powered. We have also discussed saucer separation. I think its unusual dual neck would make a very interesting platform for saucer separation. We have even considered having it launch an auxiliary craft. I personally like the idea of an auxiliary craft and I think the cannon supports this as well. We have seen the Federation add auxiliary crafts like the Intrepid's Aero Shuttle (never seen on-screen, but later replaced by the Delta Flyer), then the Sovereign's Captain's Yacht. Of course, there is the Galaxy saucer separation and the Prometheus Multi-Vector Assault Mode. (Does everyone know that the Enterprise-A was actually designed for saucer separation? Next time you have a chance, look at the bottom of the Enterprise-A – not just the one in STO, but the one from the movies. It has four rectangles on the bottom of the saucer, which are actually landing gear.) As you can see, there is quite a lot of precedence in terms of the Federation’s desire for beefier and more robust auxiliary crafts, so I think there is a good argument for a ship as large as this one to have either saucer separation and/or a heavy auxiliary craft. I like to think there are, at least… possibilities.

I look forward to getting this ship into your hands.