The day has arrived -- and we are happy to reveal the final version of the winning ship from our Design the Next Enterprise contest. We present to you the fan-designed U.S.S. Enterprise-F, a new Odyssey-class starship built in a time of war to act as the flagship for Starfleet and the Federation. Originally submitted by fan Adam Ihle, the design was finalized by the Starfleet Corps of Engineers at the San Francisco Fleet Yards.

The new Odyssey class represents the next stage of Starfleet Cruiser design, emphasizing stability and firepower while allowing for versatility in exploration. In the Star Trek Online timeline of 2409, the galaxy is embroiled in war with numerous threats to peace and stability. This Enterprise is designed to carry a message of peace, as well as to show the strength of resolve that forms the foundation of the Federation. 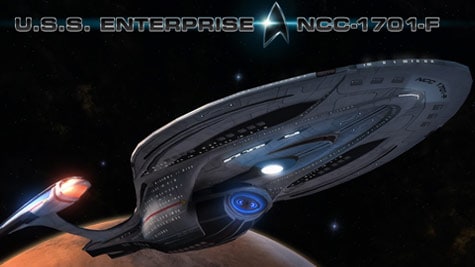 
Reflections on the Design

Adam's sketch inspired us. It created internal discussions about the evolution of the Starfleet Cruiser and how this ship represented a new approach to design that would lead us into the future. The silhouette remains familiar and recognizable, yet the ship offers an evolution in design that adds both beauty and function worthy of the name Enterprise.

With twin necks and sleek curves, this vessel is larger than any previous Enterprise. It represents an overwhelmingly beautiful presence and is an inspiration to the fleet. With slight bows to the neck and nacelles, this ship flows through space with purpose. We're thrilled to have brought this design to life and feel that the final render elegantly captures in high detail the spirit and flow of Adam's original.

Future Forward for the Enterprise-F

Now that the ship has entered service, it will be revealed to players in an upcoming Star Trek Online Feature Episode in which players will be able to see the ship in action and meet some of this ship’s new crew members. In addition, player captains will soon have a chance to earn their own Odyssey-class ship so that they can experience the power and grace of this ship for themselves.

Stay tuned as the U.S.S. Enterprise-F enters the Star Trek Online universe and makes itself known. We would like to give a huge thank you to all the fans that contributed to this contest and to the ongoing support for the game. We look forward to the future together.

And last but not least...

A very special thanks to Adam Ihle. You have a wonderful imagination and your ship is beautiful.